I saw a Tweet by Kent C Dodds recently where he mentions the Mock Service Worker library. Now that I’ve worked with it for a bit, I’m in love.

And it looks like a lot of other people are, too. MSW won the “Most Exciting Use of Technology” award at this year’s JavaScript Open Source Awards.

Let’s take a look at what MSW does, and how and why you should use it for your front end tests.

You want to avoid connecting to your real API when running your tests because...

But your app still needs to interact with an API to function, meaning you need some sort of fake API to run, that emulates your real API. This is where MSW comes in.

You define handlers using MSW, and it’ll act as your real API, intercepting requests from your front end and responding to them using the handler logic. 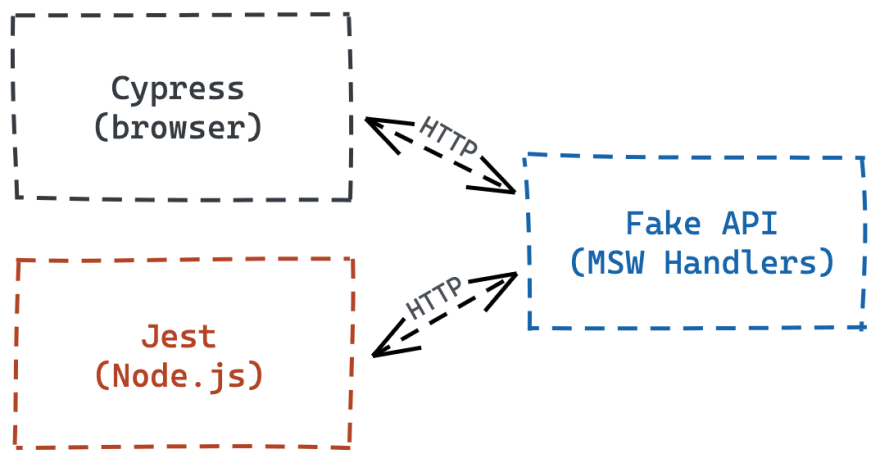 But can't I just mock fetch?

Normally if you’re testing a frontend you’re usually either mocking fetch or axios, but MSW acts as an actual server, so your app connects to it as if it’s connecting to your real API.

This means your app isn’t even aware that it’s connecting to a mocked API. To your app, it’s just another day at the office. This guarantees identical behavior in your tests and in production. So...

We have a todo list app that uses the SWR library to fetch a list of todos. It also uses fetch to make a POST request when we insert a todo.

Check out the live example here. (Tasks you insert here are private to you and aren't shared with other users.)

Sidenote on best practices: Query by role, and use screen

These two insights came to me from Kent C. Dodds's excellent article, Common mistakes with React Testing Library, which I highly recommend reading.

Now let's test whether the app displays a "No tasks yet" message if the user doesn't have any tasks.

You'll notice our test fails. That's because when we do our expect, the data is still loading. So let's add some code to wait for the loading state to disappear:

Here we use DOM Testing Library's waitForElementToBeRemoved function to wait for loading to finish.

Next, we can test whether our app displays an error message if the API returns an error. To do this, we can overwrite our default handler for /tasks with another one that we include directly in our test:

(Remember, we added server.resetHandlers() to run after each test, meaning the following handler will only exist for this test.)

But our test fails! The test can't find our loading state. Instead, the app just renders the "No tasks yet!" message immediately. This brings us on to one of the gotchas with testing a FE.

Watch out for caching

The issue we're experiencing above is because, the data fetching library we're using, SWR, caches responses. So if it has a cached response it'll return it immediately. A lot of data fetching libraries like SWR, React Query and Apollo Client, have this type of caching behavior that might cause issues.

To get around this, we need to clear SWR's cache between tests. To do this, add the following to afterEach in your test setup file:

We also need to add dedupingInterval: 0 to the SWRConfig in our GlobalWrapper component that wraps all our tests:

Otherwise, SWR is going to wait a bit to see if there are any identical requests between renders that it can do as one call, meaning if we have two tests that call the same endpoint but that expect different responses, SWR is going to combine those two requests as one.

All our tests pass! What's next?

(You can see the completed code with everything we've added here, and see a diff comparison here)

Now you know how to set up MSW to test your front end, and how to write those tests. There is still plenty more to cover. In my next post we'll look at:

And in a future post, I'll also cover how to set up MSW with Cypress for end-to-end tests.

Also feel free to Tweet at me if you have any questions.

If you found this post helpful, and you think others will, too, please consider spreading the love and sharing it.