The ability to position elements on a page is must-have for every web developer. And still, I see even experienced developers often times struggle with this a bit or google instantly. But if you take your time and get this right, you will be a CSS-positioning ninja ⚔️ by the end of this post.

If you prefer to watch it in a video format instead I created a tutorial on my YouTube channel, where I explain this on a living example:

The position property tells the browser how an element should be positioned on the page. By default the value of position is static, but we can modify it to be any of the following values: relative, absolute, fixed, sticky. In this post I will go over each of them.

We will use a simple HTML markup which is really simple for better understanding. It contains a container div, and 3 child divs, that we will position throughout the examples.
I also added different colors to these child divs, so it will be easier to see the difference.

ℹ️ If you want to play around with the code, feel free to use this CodeSandbox link.

If we set the position of an element to relative, it will appear in the document as it would by default using static. The trick is that by setting position relative, we gain access to the following CSS properties: top, left, right, bottom. With these we can add an offset to the specific direction. So for example if we set left: 20px. The element will be placed 20 pixel to the right. If we would have provided -20px it would push the content to the left with 20px.

We get this result:

With fixed positioning we also have access to top, left, right, bottom properties. In this case the element is positioned relative to the browser window's viewport.

We get this result:

Make these changes to the CSS:

And we get the same result as with position fixed:

If we add a position value to a parent, in this case we will add it to the container div, the absolutely positioned child will be positioned relatively to that. We often use relative position for the parent as it won't remove it from the standard document flow, and the parent will be placed in the site where it would have been without position: relative.

Add position relative to the container:

This is the result:

Using sticky will position our element based on the user's scroll position. It toggles between position relative and fixed. We can provide the offsets using top, left, right, bottom. Until the specified offsets are met the element acts like a relatively psoitioned element, but when the scroll position is greater than the offset it "swithces" to position fixed and be positioned relatively to the viewport. It stays fixed until the user scrolls back to the opposite direction and the distance will be less than the offset, then it goes back to act like a relative positioned element again.

To be able to scroll add 3 times the height of the viewport to our container:

Add the sticky position and the top offset to the element: 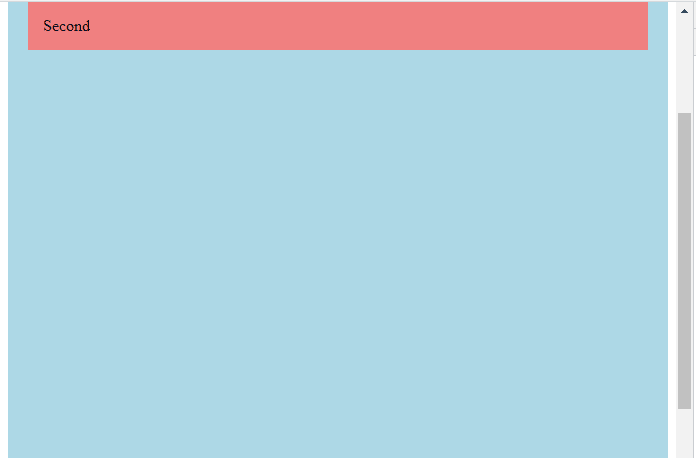 Now, by default the page looks like as we haven't done anything. But if we scroll down, below the second div, it sticks to the top directly (because of the 0px offset, add more if you need), and scrolls with the content in that fixed position. If we scroll back to the top it will be placed in its original position.

And this is everything you'll ever need to position elements on a webpage like a pro.

If you want to learn more, consider following me on other platforms too 👇.

Where you can learn more from me?

I create education content covering web-development on several platforms, feel free to 👀 check them out.

CSS Animation: A circle with smaller circles orbiting it.

Once suspended, javascriptacademy will not be able to comment or publish posts until their suspension is removed.

Once unsuspended, javascriptacademy will be able to comment and publish posts again.

Once unpublished, all posts by javascriptacademy will become hidden and only accessible to themselves.

If javascriptacademy is not suspended, they can still re-publish their posts from their dashboard.

Once unpublished, this post will become invisible to the public and only accessible to Adam Nagy.

Thanks for keeping DEV Community 👩‍💻👨‍💻 safe. Here is what you can do to flag javascriptacademy:

Unflagging javascriptacademy will restore default visibility to their posts.