FastAPI is an awesome modern Python framework designed to enable developers to quickly build robust and performant APIs.
Once you start getting the hang of it, you can become super efficient in building new endpoints and implementing
complex business logic. However, it might be destabilizing at first when coming from more opiniated Framework like Django that
offers more functionnalities out of the box.

Thus, I thought it could be interesting (and fun !) to re-recreate the well known polls app from the Django tutorial, but this time using FastAPI
and React ! In this multi part series I'll try to follow the same path as the original as much as possible, although I'll probably split
some parts in two to avoid an overload of information.

Today is part 1 : Setting up the project, creating the polls app and making your first path operation

The code for this part is available here but I encourage you to code along instead !

🔧 Setting up the project

FastAPI is quite easy to setup, in fact all you need to run a FastAPI app is a singe file instantiating
the main app and an ASGI worker to run it. Of course we'll go a bit further. We'll run
the app in a Docker container so you'll need to have it installed on your machine

First create a Dockerfile at the root of your working directory, and write the following instructions in it :

This needs a bit of commenting.

The way dependencies are installed might seems a bit strange. Here we use poetry as a package manager, so we need to install it first and
then run install without creating a virtual env (that --no-root bit). What's great about this approach is that you can use
the same pyproject.toml in your developement environment so things like static analysis tools uses the same dependencies. In a production
settings we would probably creat a multi-stage build and discard poetry to have a slimer image.

The app folder will be created in the next section that's where our code will live.

Finally, notice the --reload option we pass to uvicorn which will allows us to work without having to restart the worker everytime we make
a change.

We'll launch the container a bit later, first we need to initialize the app !

Now as I said we'd only need to create a main.py file if we wanted to. But to stay true to the theme of this serie, I'd like
to create a directory structure similar to django apps. That's why we'll create a second app directory that will be our "main"
app. Later we'll also create a polls directory.

For now simply run mkdir app/app to create the folder, and create a main.py file inside of it. Your directory strucutre should now
look like this : 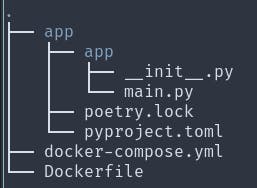 Perfect ! And now buckle up as the obligatory hello world ! is approaching. Inside main.py write the following lines :

This will initialize the app and create our first path operation. This one
is straight from the docs ! But you can't see the message yet as we still need to launch the container. We're almost there,
head over to the next section !

Before launching the app we need to build the image first. From the root of your project run docker build -t poll-app .

Now we can launch the container: docker run -it -p 80:80 -v "$(pwd)"/app:/app poll-app. This will also mount
our app directory so we don't have to recreate it each time we edit the files.

We're now ready to test our endpoint. In your browser navigate to localhost and behold !

Now that's already good, but what is great is that FastAPI comes with a built in and Swagger for which the open api configuration
is autogeneated. That means that if you go to localhost/docs you'll see the following :

FastAPI automatically generate your endpoint documentation ! Pretty neat feature for an API to have if you ask me.

Now that Hello world ! is out of the way (I recommend adding it to your personnal collection), let's get to the actual polls app. As
I mentionned earlier we'll create a polls directory along side the main app. Once that's done add a file called endpoints.py to
this new folder, your project' structure should look like that : 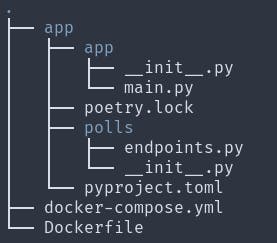 Don't forget to create the relevant __init__.py file so the folder are recognized as Python modules

Now let's create an index for our polls app. This index will later be responsible for listing the available polls in our database but for now it will return a simple message. Add the following code to the polls/endpoints.py:

Here we use APIrouter to declare our path operations. It works exatcly the same as
the FastaAPI(). Now all we need to do to make our endpoint available, is to declare it in main.py:

The prefix indidates that all the routes coming from the polls endpoints start with polls. Your polls index should now be available both
at localhost/polls and in the Swagger documentation ! Let's take a look !

Great ! Our polls index works, although it doesn't return anything yet, we'll chnage that in part 2!

That's is for part 1, let me know if you found it useful ! In part 2, we'll see how to set up an actual database to store our polls !

Once suspended, jbrocher will not be able to comment or publish posts until their suspension is removed.

Once unsuspended, jbrocher will be able to comment and publish posts again.

Once unpublished, all posts by jbrocher will become hidden and only accessible to themselves.

If jbrocher is not suspended, they can still re-publish their posts from their dashboard.

Once unpublished, this post will become invisible to the public and only accessible to JB .

Thanks for keeping DEV Community 👩‍💻👨‍💻 safe. Here is what you can do to flag jbrocher:

Unflagging jbrocher will restore default visibility to their posts.