I think bots are neat. I really like the artwork on Pokémon trading cards. So I built a Twitter bot that tweets out two Pokémon cards every six hours in Pokémon in-game battle style.

You can check out the Twitter bot at @tinyversusbot and if you want to see the Pokémon team you'd start your adventure with, visit tinyversusbot.

Here's an overview of how I created this bot using Python and AWS Lambda.

3. Connect to your Twitter Account via Tweepy
I used the tweepy library for this bot - you'll need to have it installed.

Import tweepy and set up the authorization.

Note: You can't tweet images directly from their web URLS. You'll have to store the image locally before you can use it.

Check out their documentation for other tweepy abilities.

Part 2: Setting Up Your Bot on AWS Lambda

In your Lambda Function, you can either place your code in lambda_function.py or create your own file within the AWS code editor. Don't delete the lambda_handler function that is needed to return a status code for Lambda to run.

Above the return in the lambda_handler function, make a call to your tweet function. 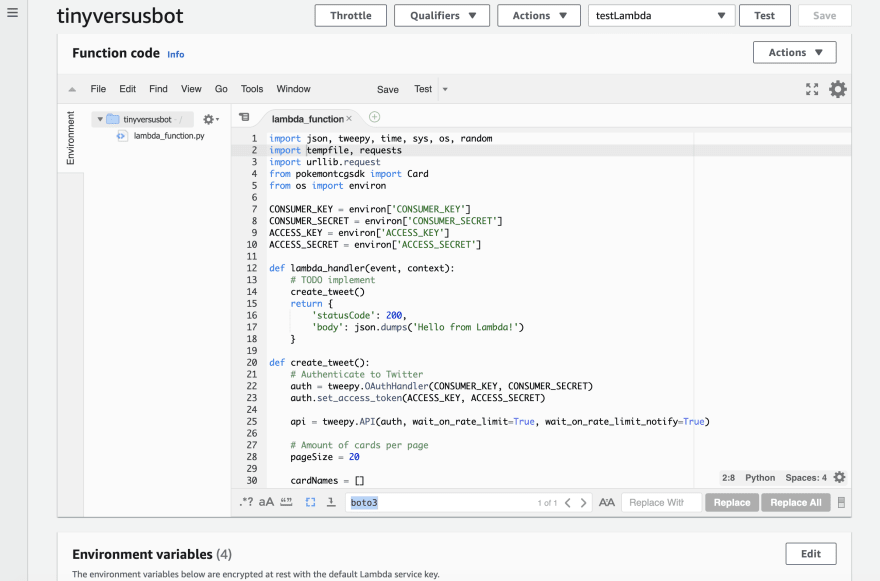 2.5. Add Environment Variables
I originally had this code committed to GitHub and deployed to Heroku, so I set up environment variables - this was so that I can connect to the Twitter API without committing my secrets.

When I moved the tweet code to AWS Lambda, I still created the environment variables to keep any credentials out of the code.

Add your authorization key and secrets as environment variables and update your code.

Here's an example where I declare my consumer key as an environment variable:

3. Add Layer
I imported some Python packages that aren't installed natively on Lambda. Layers store dependencies and can be used by other functions, so if you happen to be creating a whole lot of Twitter bots that use the same libraries, you won't need to repackage them for every new function.

Your Python libraries need to be imported as a zipped folder within a python subdirectory. My zipped folder structure looks like this:

On the Lambda dashboard, create a new layer and upload the .zip file. Go back to your Lambda function and add the new layer. To test and confirm that everything's working as expected, click the "Test" button above your Designer panel.

4. Add CloudWatch Trigger
Now we need to add a trigger that automatically runs at certain intervals so that your bot tweets on its own. My bot doesn't have any specific requirements, only that it needs to post every six hours, so I set it on a schedule with a fixed rate of 6 hours. 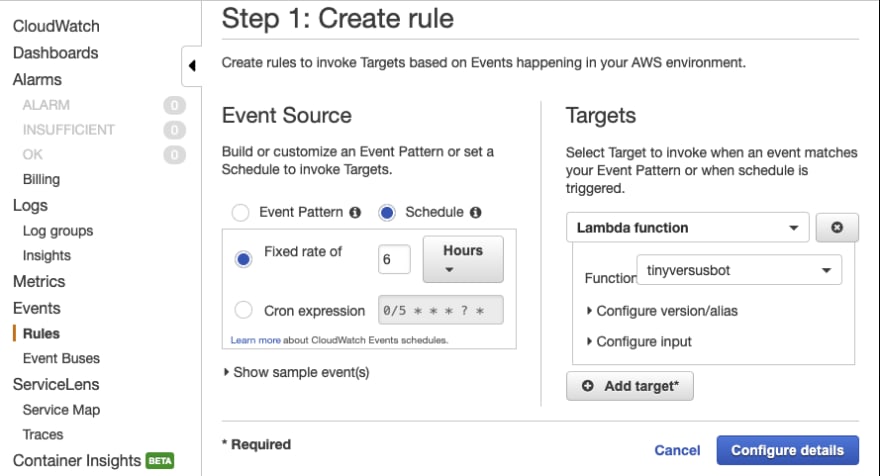 Go to your CloudWatch service and create a new rule (under the Events tab). Set a new target to your Lambda function and press "Configure details".

After doing all that, my Designer panel looks like this: 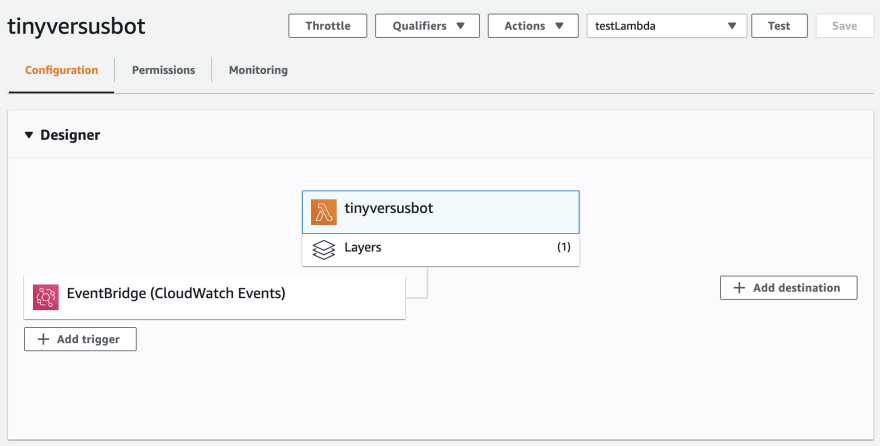 5. You're Done!
Your Twitter bot should be active and running on its own.

On the free tier of AWS Lambda, you get 1 million requests free each month. If you plan on going over the free tier limit, keep an eye on how much compute time you're consuming. CloudWatch metrics can be found on the "Monitoring" tab on your Lambda function.

Jeannie Nguyen
Writing about everything I learn on the web and sharing it so you can learn with me.
How to Check for Changes in Inline Styling
#beginners #tutorial #css #codenewbie
How to Install Java JDK and Maven on Mac OS
#tutorial #java #beginners #bash
insertAdjacentHTML vs innerHTML
#javascript #tutorial #html

Once suspended, jeannienguyen will not be able to comment or publish posts until their suspension is removed.

Once unsuspended, jeannienguyen will be able to comment and publish posts again.

Once unpublished, all posts by jeannienguyen will become hidden and only accessible to themselves.

If jeannienguyen is not suspended, they can still re-publish their posts from their dashboard.

Once unpublished, this post will become invisible to the public and only accessible to Jeannie Nguyen.

Thanks for keeping DEV Community 👩‍💻👨‍💻 safe. Here is what you can do to flag jeannienguyen:

Unflagging jeannienguyen will restore default visibility to their posts.