Let me know if this sounds familiar...

It starts off so innocently...

After reading the Elasticsearch tutorial, I quickly put together a block of code that sends a simple string and gets back a load of useful data. 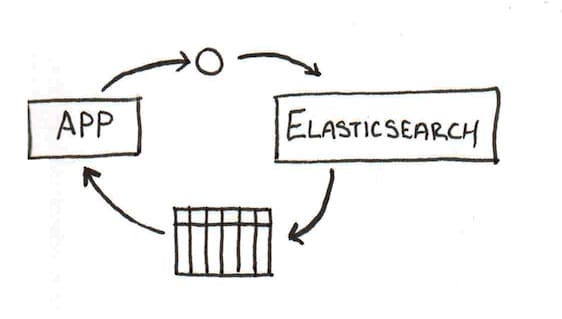 Deeper down the rabbit hole

Immediately I noticed the location of the "real" data. It's buried way down there in hits.hits._source. So I updated the block of code to extract the useful array from the noisy metadata.

As I continued to develop, subtle searching distinctions started appearing and needed to be handled:

And even if the correct search is identified, there are other features that should be part of a real application, like aggregations and highlighting, which lead to more concepts like post_filter and .raw fields. What was originally quite simple is starting to look more like a hairball. 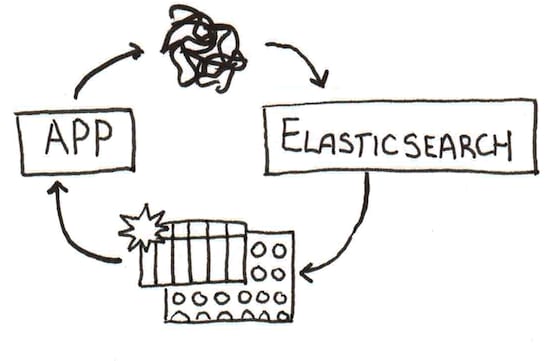 I know, I'll create a QueryBuilder

Eventually, I wanted to get back to the simplicity that existed at the beginning. The best course of action was to create a module that accepts a few parameters, build the big query and process the results for return. It's a good case for modular development and I can use tests to verify it works correctly. 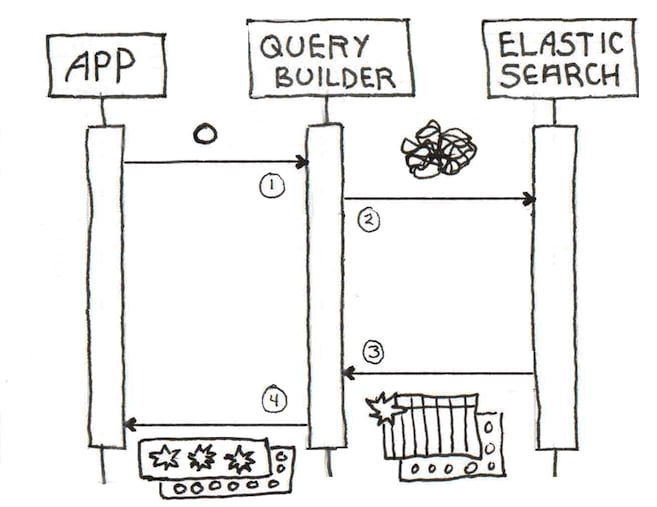 Now there are some tough questions to answer:

which is almost as bad as no test at all. And to be a little pedantic, these aren't even unit tests, these are systems integration tests. The scope is too big for practical development.

The second or third time I went through this process, I started to think about a better approach. The key is the CI server. I don't want Jenkins, Travis or CircleCI to hit a live instance. In the case of PII, it may not be allowed to access the data anyway. I want to have something that looks like Elasticsearch but is static and deterministic.

Putting on my functional programming hat, it looks like this: 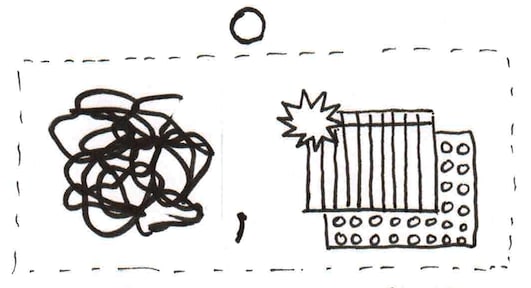 A set of params (the circle) produces a pair of shapes, the request and the response. By enumerating the parameters to be tested, I can produce the pair of shapes for each test. That's a good theory, but how to put into practice? I need to figure out how to:

That's a lot, so let's get started:

Enumerating the set of parameters

If time and money were in infinite supply, we could exhaustively test every combination of parameters to ensure all possibilities are covered. Since we don't live in that reality, code coverage metrics are the next best thing. The first step is to create tests that cover the percentage of code you feel comfortable with. Don't worry about good assertions at this point, we are just looking to make sure all code paths are hit.

Preparing to store the request/response pairs

I use the following directory hierarchy to guide where each request/response pair goes:

Create a Fake to encapsulate the behavior

With the directory structure defined, I'll create a class that hides some of the gory details. This should be located at the root of the project.

Next step is finding the code that calls Elasticsearch, and temporarily inserting a few lines that save off the request.

When the code that builds the query and calls Elasticsearch runs inside a browser, capturing the request gets a little more complex. Basically, there are a few options:

I let curl do the grunt work of hitting the Elasticsearch instance and capturing the response. The raw response contains some metadata that will be different between runs, like took, so it needs to be stripped out. I used jq, but awk or sed will work just as well.

Also, if you are a beginner with *nix like I am, the construct ${REQ%_req.*} looks like it does nothing, but it is shell string manipulation and very handy to know.

Load into the tests

Once the request and response pairs have been captured, they can be integrated into the unit tests using the test fake to stand in for Elasticsearch. 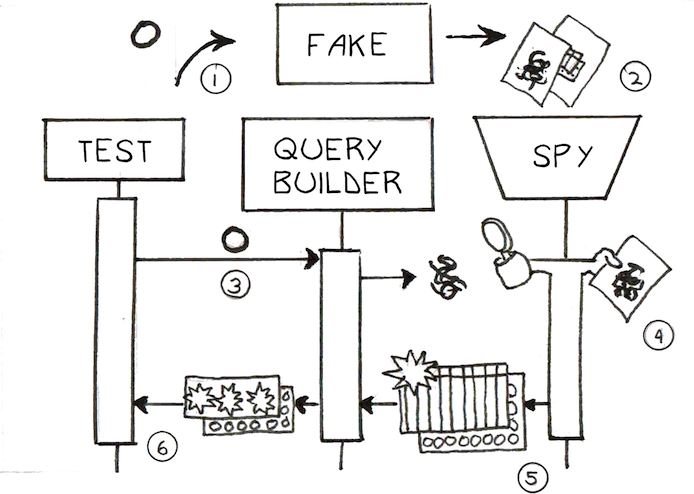 The final piece of the puzzle comes from Martin Fowler, a contract test. The idea is to test the saved responses against a live instance to make sure that the assumed responses are still accurate. If it fails, maybe it is time to regenerate the requests and fix your code! 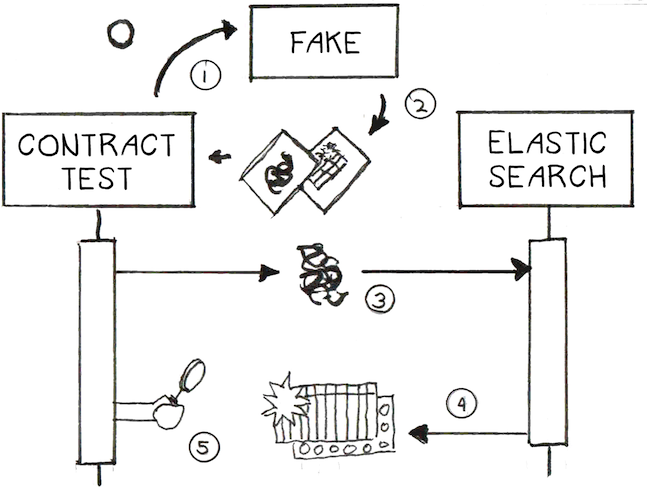 It should be noted that the above technique can be applied to any external API and not just Elasticsearch.

How to: Call a TeamCity build from OctopusDeploy

Trending on DEV
CSS in JS - have we done something wrong?
#javascript #css #discuss #typescript
Git Rebase Explained and (eventually) Illustrated
#git #beginners #tutorial #productivity
This is how I evaluate my potential employer (it works 99%)
#career #motivation #productivity
🤑🥳😎Going down the youtube tech guru hole or how you can spot scam artists
#beginners #javascript #webdev #career
Celebrating 10K+ Followers 🎉🙌 Thank you DEV and everyone! 👋
#webdev #tutorial #productivity #opensource
What are some (theoretical and pragmatic) cases where it is worth having your own servers instead of renting from a cloud vendor
#discuss
I had to build my own Markdown Editor because no tool was fast enough for me.
#productivity #opensource #showdev #javascript
How to Market a Blog?
#Blogging #computerscience #discuss