The blockchain is going to revolutionize the gaming industry.

When a game’s digital currency becomes an openly traded token, and game objects are fully owned by players as NFTs, a brave new world of game development becomes possible.

The opportunities afforded by this innovation are incredible. What follows is an exploration into how blockchain technology provides so much potential, and how you can start building a framework for integrating NFT’s into games.

A note before we begin: This is an idealized vision for blockchain technology. There are significant challenges still to be overcome- Scaling and regulatory pressures to name just two.

For the purposes of this article, we are assuming that these issues will be resolved over time- and use this time to understand the technology, its capabilities, and to start building a blockchain strategy for games.

We need to start now, so that when these issues are resolved, we can be ready for the inevitable wave- a wave as revolutionary as the free-to-play innovation that swept game development a decade ago. This will be the blockchain wave.

To be prepared for the Big One, we need to buy our surfboard, be in the water, and be ready to swim as the wave starts forming.

By the way, these are shark infested waters.

The problem with paradigm shifts is you have to start at the beginning. Legacy game studios took so long to transition to free-to-play models because it was diametrically opposed to the decades of knowledge built around AAA games.

With the blockchain, we once again start at the beginning. It’s the perennial curse of game development- you feel so damn old because everything’s new all over again.

You can read my primer on blockchain fundamentals to get an understanding of the underlying technology NFT’s are built atop of.

Then you can read my framework for Modern Game Design, providing context to the design and operation of highly successful free-to-play games.

While these aren’t requirements for this article, having a solid frame of reference will help in understanding the potential this technology provides.

Blockchain technology, and NFTs, create an order of magnitude more complexity for managing your games economy. It also provides an unprecedented opportunity for game developers.

The Power of Non Fungible Tokens

Any game object owned by a player- any item in their inventory, any character, any achievement, can be represented on-chain as a Non-Fungible Token (NFT).

NFTs are a type of smart contract. Smart contracts are pieces of code that live on a blockchain, and define the capabilities of a token.

Non-fungible is a fancy way of saying “not interchangeable.” A ten dollar bill can be replaced by another ten dollar bill, and no one cares- it’s still a representation of ten dollars- despite subtle differences in serial numbers, print date, and wear of the bill.

Non-fungible tokens are not interchangeable. The easiest way to think about them is to compare it to baseball cards.

You can have duplicates, but they are not interchangeable representations of a unit of account. Those unique attributes- serial numbers, print date, wear, are of much greater importance.

Every object put on-chain is persistent, and truly owned by the wallet owner. Within the game, these objects have utility- it is a game object after all. Instead of storing this object within your games database, the object is stored on a fully decentralized blockchain.

Out of the game, the NFT has value. Like baseball cards, these tokens can be traded for money or like kind- trading cards at the schoolyard. The utility in your game gives you a base level of value, but the maximum value can be much higher- its prices set on a secondary market.

This shift to true ownership of your games objects, coupled with the ability to hook these owned objects into a dynamic marketplace, is the root of why NFT’s are so revolutionary.

NFT’s are so revolutionary because they sit at the nexus of Community Driven Marketing, Engagement Campaigns, and Long-Tail Monetization. 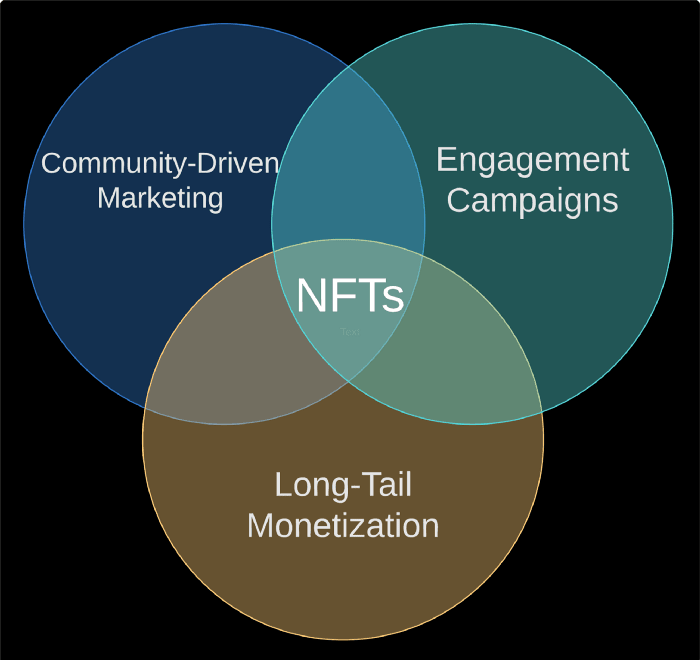 In my article on ARM Game Design Theory, I list community-driven marketing, re-engagement campaigns, and long-tail monetization as the three pillars of a successful free-to-play game business.

NFT’s are the holy grail of these three points. As opposed to game features that cause tension with each other (think the issues players have with “pay to win” game mechanics), NFT’s maximize and reinforce each pillar.

Growth of free-to-play games is largely gated by player acquisition cost. The vast majority of new users brought into a game are purchased by auction in a highly competitive marketplace- at absolutely insane prices.

New player acquisition is so important that developers calculate every players lifetime value. The profitability of your game requires an aggregate LTV greater than your acquisition cost.

As such, organic growth is one of the big focuses for a game studios marketing department. If you can acquire users without directly paying per install, you sidestep one of the single largest sources of a game’s operating cost.
NFT’s present the biggest organic growth opportunity in over a decade.

NFTs have real, transactable value, and are truly owned by the player. This creates strong incentives for the player to grow the value of their NFT’s.

A users NFT collection incentives them to become ambassadors and evangelists for your game.

A single user advertising your game might not have the same impact as a tracked million dollar ad campaign, but any new user acquired this way is essentially free (from a marketing perspective). At scale, this can drive a level of organic growth that is self-sustaining.

A savvy creator is going to create content campaigns for the NFT’s. Contests, engagement lotteries, VIP community rewards, etc. They put in the work of growing their brand, and your brand lies in the cut.

This outsources your marketing in a very cost effective manner- As long as you are judiciously managing your NFT economy (a subject for a future article), you have a very attractive ROI for this marketing strategy.

For marketing, NFT’s creates passive incentives for your users. Incentive structures like these, at scale, creates FOMO for your game. And most powerfully, NFTs allows marketers to engineer FOMO events through engagement campaigns.

The secret to a long lived game lies in the Live Operations of that game. New content, continually released, aimed at specific player segments to keep the show going. A strong Live Operations team can have a free-to-play game reach all-time highs for revenue and player count years after initial release.

The key to a successful Live Operations team is how that new content is released. The manner in which you release new narratives, game assets, and features; is hugely important to the successful operation of a live game.

When you have an NFT that is owned by the player, and you attach a scheduled in-game reward to that NFT, you have an incredibly powerful retention mechanic.

Imagine a scenario where every 24 hours a users NFT can be “activated” in-game, for an in-game reward.

Things really get going when you change the state of the NFT on enough in-game activations- If a player activates their NFT every 24 hours for a month, the NFT gets upgraded and starts granting better rewards per 24 hours.

Tell me about your D30 retention when all your players have this type of NFT. Even if some users are only logging into the game to farm upgraded NFTs for resale on the secondary market, you get 30 chances to hook those users into the other features of your game- not to mention the revenue from their sale.

And this says nothing about getting early access to content based on a player’s owned NFT, or exclusive content. As you go up the rarity curve, these NFT’s can be tied to things like governance- the ability to provide design and feedback, or even development access- granting read rights to the codebase.

NFT’s are capable of all of this. They provide a unified mechanism to define your players’ relationship to your game. And every time an NFT changes hands, you get paid.

NFT’s exist on-chain, and as such, can be traded for digital currency. Smart contracts, which form the basis of your NFT, allows you to write very specific rules on what happens when a trade is executed. This enables you to get a percentage for all trades on the secondary market.

For the entire lifetime of the NFT, you get paid per transaction. Consider again the marketing strategy of gifting 100 limited edition NFT’s to a content creator:

As those NFT’s are traded on the secondary market, you get a portion of the proceeds per sale. How many marketing campaigns can you think of that provides a direct source of revenue?

How many can you think of that generates revenue over the long-term? Because you get paid for every transaction of an NFT, for the lifetime of that NFT- developers can plan for a much longer term than ever before. This means your engagement campaigns, and marketing strategy, can also be designed for the long term.

And that’s just where the monetization opportunities start. This is a hugely unexplored area. Consider the following:

The monetization opportunities are incredible, and will warrant their own articles in the future.

This is why NFTs, if properly harnessed by developers, are such a powerful tool. They create feedback loops that captures, retains, and rewards players.

The Revolution Will be Tokenized

Non fungible tokens, and digital currencies, allows for nothing short of a revolution within the games industry. The capabilities of this technology allows you to create community-driven marketing strategies, that tie directly into your content engagement campaigns, that are monetizable over the long term.

In the coming articles we’ll further explore the deeper implications of NFT’s- how they change a game studios staffing and management. We’ll investigate some of the anti-patterns and risks in managing your NFT economy. We’ll also look into digital currencies themselves- the implications of turning your in-game currencies to real world, tradable currencies.

The good news is time is on our side. The blockchain industry still needs to mature to allow the technology to stabilize, and allow transaction costs to race to zero. Once the stage is set, savvy developers will be able to capitalize on the amazing opportunities the blockchain affords.

Those savvy developers are starting now. They’re experimenting with these systems, gaining an understanding of the technology, and developing an integration strategy.
When the inevitable wave arrives, they’ll be in the water and ready to surf the Big One.

Will you be among them?

Help Build the Future of the XRPL with Bounties

Once suspended, jerkytreats will not be able to comment or publish posts until their suspension is removed.

Once unsuspended, jerkytreats will be able to comment and publish posts again.

Once unpublished, all posts by jerkytreats will become hidden and only accessible to themselves.

If jerkytreats is not suspended, they can still re-publish their posts from their dashboard.

Once unpublished, this post will become invisible to the public and only accessible to Justin Nearing.

Thanks for keeping DEV Community 👩‍💻👨‍💻 safe. Here is what you can do to flag jerkytreats:

Unflagging jerkytreats will restore default visibility to their posts.