In this series, I am reviewing the C++ basics, primarily for those who already understand a coding language and are curious about what makes C++ different.

Here is part one.
Create a C++ program. Run in Visual Studio Code.

Key concepts I am going to review in this blog:

Open your C++ folder in Visual Studio Code and create a spock.cpp.

Then create a skeleton for the program.

#include <iostream>:
<iostream> is our pre-processor directive providing input and output functionality, <cstdlib> defines several general-purpose functions, including a random number generator, which we will need.

C++, like most coding languages, works from top to bottom, so if we were to create handThrown() under the main() function, then an error would occur.

When declaring functions, we also need to state what data type we expect returned. In the case of our showHand() function, we do not expect it to return a value; instead, we want it to perform a task, then have control return back to the caller. The void keyword specifies that the function does not return a value.

The C++ standard requires main() to return int. Even if we leave the return statement out, it will return zero, indicating to the operating system that the program ran successfully.

Create a user variable and ask the user to input a number.

C++ is a strongly-typed language. It enforces strict restrictions on intermixing values with different data types. On the other hand, Javascript (created in C++) resembles C++ closely in syntax but is a weakly typed language, meaning its variables still have a type but have looser type rules.

The user variable is considered locally scoped. It can be used only by statements inside the main() functions block of code. user is not accessible within our showHand() function. Global variables are declared outside of all the functions and will hold their value throughout your program's lifetime.

Generate a random number between 1 and 5 and assign it to the computer variable.

srand(x) is used to set the seed of the random number generator algorithm used by the function rand(). In combination with (time(NULL), we can use our computers 'continually changing' internal clock to set the seed to a different value on each run.

To produce a random integer within a given range, we can use the following formula:
int number = a + rand( ) % n;
a = the first number in your range
n = the number of terms in your range

C++ supports the usual logical conditions from mathematics and the if-else and switch constructs you also see in C, Java, JavaScript and Visual Basic .

Javascript was written in C++, and the similarities in syntax show in the switch and if-else statements.

Fill your showHand() function with the following switch statement.

When writing, functions are an excellent way to reduce code length if a piece of logic is required multiple times. In our program's case, we can use showHand() for both the user's and computer's choice.

Here is the logic behind Rock, Paper, Scissors, Lizard, Spock:


With that logic in mind, we can write conditionals for all winning factors or a tie. For the sake of brevity, I did not include them all here.

Here is my repo with the full code:
github.com/JerryMcDonald/spock.cpp

In your bash terminal, compile and run the program. 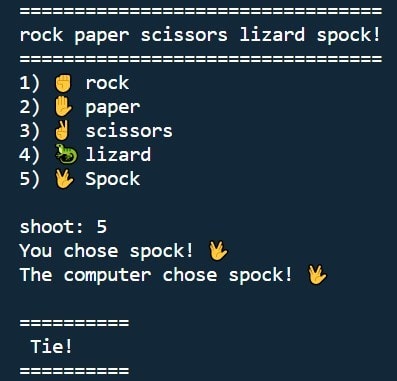 Thanks for reading. If you want to connect, here is my Linked-In

I got my first Pull Request merged!

Once suspended, jerrymcdonald will not be able to comment or publish posts until their suspension is removed.

Once unsuspended, jerrymcdonald will be able to comment and publish posts again.

Once unpublished, all posts by jerrymcdonald will become hidden and only accessible to themselves.

If jerrymcdonald is not suspended, they can still re-publish their posts from their dashboard.

Once unpublished, this post will become invisible to the public and only accessible to JerryMcDonald.

Thanks for keeping DEV Community safe. Here is what you can do to flag jerrymcdonald:

Unflagging jerrymcdonald will restore default visibility to their posts.