Recently I've been shopping around for a framework to replace KnockoutJS in an existing application. While KO has served it's purpose well, over the years it hasn't been maintained very actively and has largely failed to keep up with the newer JS frameworks in terms of features and community adoption.

After doing some research to find it's replacement, I settled on VueJS. It seemed to be most aligned with Knockout's MVVM pattern while at the same time being modular and extensible enough to serve as a complete MVC framework if needed using its official state management & routing libs. Above all, it seems to have a flourishing community which is important when it comes to considering a framework.

So as a KnockoutJS developer, let's go through some of the most familiar aspects of the framework and see how it translates to VueJS.

In KO, the VM is can be as simple as a object literal or or a function. Here's a simple example:

VueJS has a very similar concept although the VM is always an object literal passed into a Vue instance. It also provides much more structure and richer event model. Here's a VM stub in VueJS:

I didn't list all the event hooks in that example for brevity. I recommend checking out the this lifecycle diagram to get the full picture.

VueJS also offers an interesting way to organize and share common code across VMs using something called Mixins. There are certain pros and cons of using a Mixin vs just a plan old JS library but it's worth looking into.

Something to note about the syntax above, it is entirely optional. You can also set the value of the el attribute in your VM to #element_id and skip explicitly calling the mount function.

The concept of bindings is something KO developers are very familiar with. I'm sure throughout the course of working with KO, we've all created or used a lot of custom bindings. Here's what the custom binding stub looks like in KO:

VueJS has something similar but it's called a "directive". Here's the VueJS directive stub:

As you can see VueJS offers a couple of additional life-cycle hooks, but on the most part, its very similar to KnockoutJS. So transferring old bindings into new directives isn't too difficult.

In most cases you should be able to move everything in your init function into the inserted function. As far as the update function goes, it will largely remain the same but you can now compare the vnode and oldVnode to avoid necessary updates. And lastly, if your custom binding used the KO's disposal callback i.e ko.utils.domNodeDisposal.addDisposeCallback you can move that logic into the unbind function.

Another thing you'll notice is that the usage syntax is a bit different, instead of using the data-bind attribute everywhere, VueJS uses different attributes prefixed with v- for various things such as v-bind for binding attributes, v-on for binding events, v-if/for for conditionals/loops, etc.

To add to that, there is also a shorthand syntax for those which might make things confusing initially and it's probably the biggest gotchas for devs transitioning from Knockout to Vue. So I recommend taking some time to go through the template syntax documentation.

Another tool in KO that we are very familiar with is the concept of extender which are useful for augmenting observables. Here's a simple stub for an extender:

Closest thing to extenders in VueJS is the concept of "filters", which can be used to achieve a similar objective. Here's what a filter stub would look like:

VueJS also has the ability to create components. They are a much more feature rich and have better lifecycle hooks compared to KO. They also feel more much "native" to the framework. Here's a simple component stub in Vue:

This just scratches the surface of what's possible with components in Vue. They are definitely worth diving more into. Maybe I'll cover them more in another post.

Mapping - One of the commonly used plugin the KnockoutJS ecosystem has been ko.mapping plugin which helps transforming a JavaScript object into appropriate observables. With VueJS, that is not needed since Vue takes care of that under the hood by walking through all the properties of a VM and converting them to getter/setters using Object.defineProperty. This lets Vue perform dependency-tracking and change-notification when properties are accessed or modified while keeping that invisible to the user.

Validation - In addition to mapping, Knockout-Validation library is another mainstay of the ecosystem. With VueJS, vee-validate is it's popular counterpart and provides similar features out of the box.

Debugging - It's important to have a good debugging tool for development. KnockoutJS has Knockoutjs context debugger, while VueJS offers something similar with Vue.js devtools

VueJS is an incredibly feature rich framework with various options for customization and code organization. It is one of the fastest growing frameworks with adoption from some big names projects such as Laravel, GitLab, and PageKit to name a few. Hopefully that will make it a good bet for the future!

I'll leave you with this chart which pretty much sums up the story of these two frameworks: 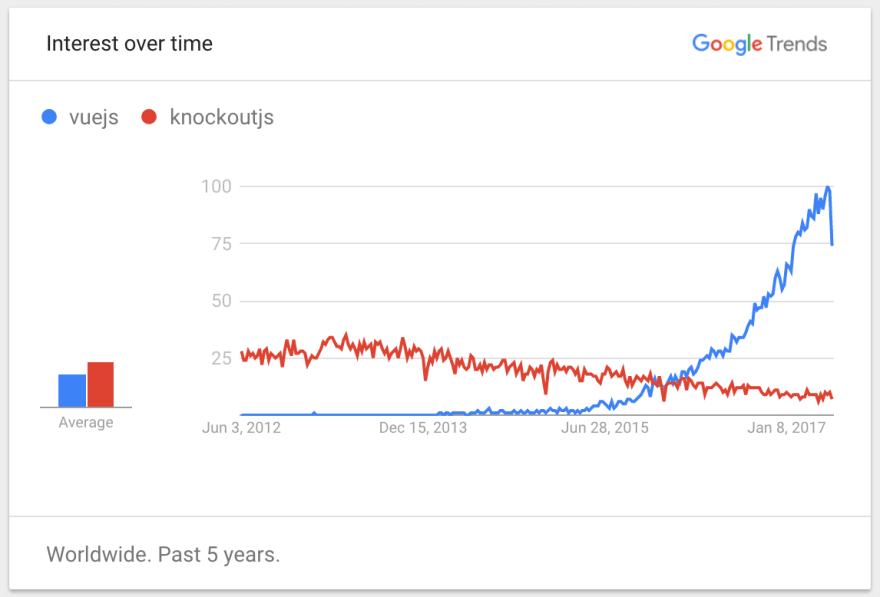