Several organizations that are looking forward to adopting complete DevOps, need a one-stop solution for their CI/CD processes. With the newest addition of JFrog Pipelines, the JFrog platform provides end-to-end automation of your DevOps workflow.

As Continuous integrations with JFrog Pipelines is a major amendment for many organizations - modifying the build processes can be a slow and gradual process. However, the Continuous delivery process can be automated easily with the one-stop solution of the JFrog Platform using Distribution and Pipelines.

In this blog, we will be focusing on the step-by-step configuration of the JFrog Pipeline to automate the Distribution flow to various Edge nodes.

(Please note; the inputResources here are defined as build info resources in this Pipeline)

Once the bundle is created, we can view it in JFrog Distribution as below; 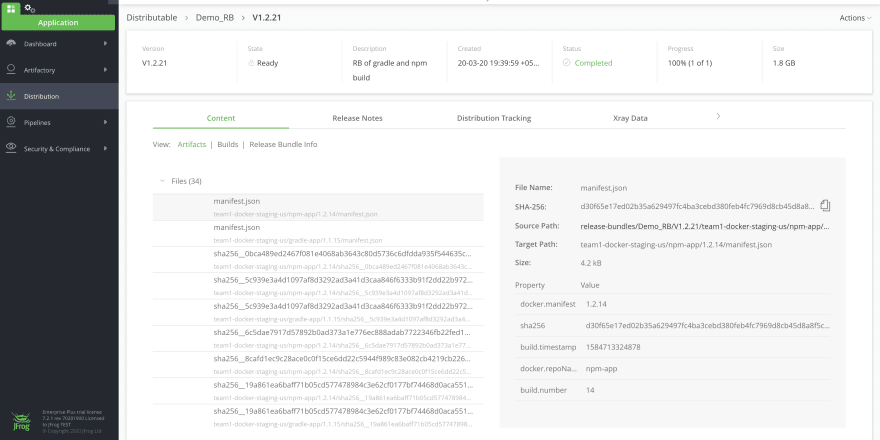 Step2:
Sign the release bundle (Can be done with the above step by adding the sign parameter as ‘true’)

Step3:
Creating the Distribution rule resource to define the Edge nodes where we want to distribute our releases

Step4:
Distributing the release bundle by using the input resources - Release bundle + Distribution rule created in the above steps

After the Distribution is complete - we can view the release bundle completion in JFrog UI of both Source and Destination Edge nodes as below:

In Edge node - Available packages that were Distributed

Thus, in some simple steps - we can automate the whole process of distribution using JFrog Pipelines.

In other words, our continuous delivery processes can be streamlined along with our Continuous integration processes and we are able to have an end-to-end CI/CD implementation.

Wishing you fast and healthy software deliveries!
The JFrog Platform

How to manage your Flutter monorepos

Once unpublished, this post will become invisible to the public and only accessible to Disha Meswania.