TL;DR The code is 👉 here 👈. The rest of this post gives information and context about it.

One of the biggest challenges today when delivering software is to move fast. Moving fast and keeping a high quality and confidence in your code is not an easy task. Having a tight feedback loop is our number one priority at Clovis.

Services like Vercel, Netlify, Render, Qovery or Railway are all working toward that goal, making our lives way easier. All these platforms allow us to quickly iterate, delivering value by focusing only on our code and forgetting about the nightmare that devops can be. I'm grateful for each of them.

But what if devops could be good old regular code? So accessible that you could actually spin up your entire infrastructure in few lines of code. By directly using a cloud provider you have no more limits, at a lower cost!

As an example, I'm going to show you how to setup preview environments in your Pull Requests on Github, using AWS CDK and Github Actions. Preview environments are a terrific tool to share your work before it goes to production or to run end-to-end tests. It gives a lot of confidence to have a mirror of your production infrastructure to play with.

At the end of this tutorial, we should be able to :

The architecture is composed of CloudFront (CDN) in front of a private S3 Bucket (file storage). CloudFront serves the sources stored in the bucket to the outside world.

The AWS Cloud Development Kit is an open source software development framework to define your cloud application resources using familiar programming languages such as TypeScript in the context of this post.

TypeScript gives us autocompletion and type safety on every part of our infrastructure, no more back and forth with the documentation, everything is available with a few keystrokes.

You can forget the hundreds of lines of CloudFormation yaml files or the confusing AWS Console UI. As an infrastructure as code framework, CDK is an abstraction over these low level constructs with sensible defaults.

A typical CDK project is composed of :

Let's see what is inside each of these files.

The app key is used to tell cdk how to start our app.

The context key can contain feature flags like the one used here. In a future release of the AWS CDK, "new style" stack synthesis will become the default, but for now we need to opt in using the feature flag.

The stack's name is an important concept. This is what we will be referring to when deploying with the cdk CLI. You can note that in our case, this name depends on a STAGE environment variable. This allow us to dynamically deploy a whole new stack by Pull Request as the STAGE variable is derived from the Pull Request number and the branch name (more on this later)!

The stack class is the unit where we declare all the resources that will be created during the deployment. To create a stack you need to extend the cdk.Stack class.

The removalPolicy is often available on stateful resources such as S3 bucket or RDS databases. The default is to keep you from making a mistake so data are kept after destroying an environment. In our case we want to clean-up everything so we have to tell AWS to explicitly DESTROY our bucket.

At the beginning of this post I talked about CDK providing sensible defaults. The general rule is that every resource you create is private by default. It means that if you want to expose them you have to do it explicitly. Security wise this is a very good point. The objects in our bucket here are not publicly accessible, only CloudFront can read them.

cdk.CfnOutput is a construct that allow you to export arbitrary values at the end of the deployment. It will be very useful to pass the deployed URL to Github Deployment API.

This is it, this is our infrastructure, in 30 lines of actual code. Not bad!

Now that the infrastructure is sorted out, let's see how we interact with the CDK CLI. I defined 3 main commands as scripts in the package.json file.

Deploying AWS CDK apps into an AWS environment (a combination of an AWS account and region) may require that you provision resources the AWS CDK needs to perform the deployment. These resources include an Amazon S3 bucket for storing files and IAM roles that grant permissions needed to perform deployments. The process of provisioning these initial resources is called bootstrapping. More infos here.

Basically you need to call this command manually only once per account/region you want to deploy to.

This command reads from the cdk.json config file and triggers the deployment of the resources. Here I specified that I don't want it to be interactive (I accept all the resources/roles creation). Also I save all the values exported with cdk.CfnOutput to a json file.

If you run the command multiple times, CloudFormation will diff your changes automatically and only update the resources accordingly!

You can notice that in order to run this command, I expect to have the STAGE environment variable set. Also, I'm only targeting a single stack but cdk deploy also accepts globs if you have multiple stacks to deploy.

Here is the destruction of the stack on AWS, the --force option is used to be non interactive as we'll call these commands inside our Github Actions.

This concludes the infrastructure part of this post, I hope you're still there for the automation!

Github has dedicated UIs and status integration when deploying code in a repository. It's pretty deep in their REST API and I didn't notice a lot of adoption for this feature.

I see a lot of benefits using it :

Github as the concept of environment to group deployments together in a sequential way. In our case we will create one environment per Pull Request.

GitHub Actions makes it easy to automate all your software workflows, now with world-class CI/CD. Build, test, and deploy your code right from GitHub.

One of the big strength of Github Actions is its ecosystem and marketplace. As someone using a lot of OSS packages on npm I feel like home, there is always a package to achieve what I want!

To achieve our automation target, we will need 2 actions. One for the deployment of the stack during the lifecycle of the Pull Request, and one for cleaning everything up when the Pull Request is closed.

This first action is triggered in two cases :

The first deployment will create all the resources for the environment and is often the slowest. Subsequent deployments will be way faster as CloudFormation diff the changes and only update the required resources.

In order to have one isolated environment per Pull Request we need to derive the STAGE environment variable from the Pull Request number and the branch name so the resulting stack name is unique to our Pull Request on AWS. I made a special step for this purpose.

There is a last npm script that I didn't mention earlier that eases the passage of the deployment's url from the step deploy the stack on AWS to the step update the github deployment status, the postdeploy script :

It reads the DeploymentUrl exported by the cdk.CfnOutput in the cdk.out.json after the deployment is over. Then it set the value as a step's output in order to be accessible by the next steps.
The postdeploy script is automatically called after the deploy script thanks to the pre and post scripts convention.

Notable actions from the community which were very convenient in this workflow :

The clean-up action is triggered in two cases :

This actions ensures that your preview environment is destroyed on AWS as soon as you don't need it anymore. It also delete the associated Github deployments so you don't see them in the UI anymore.

Notable action from the community which was very convenient in this workflow : 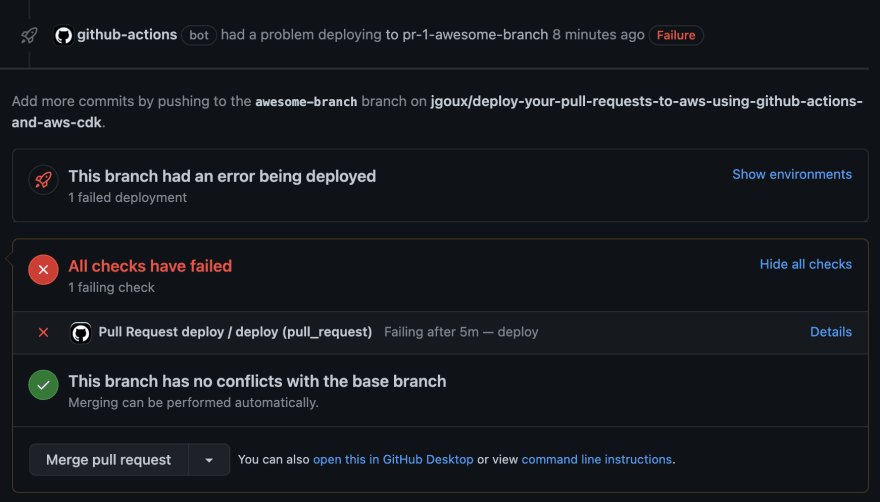 New push, here we go again, the previous deployment is marked as Destroyed

Clicking on the View deployment link led me here, interesting

You now have all the building blocks to make your own workflow, how cool is that?! The cloud is the limit now!

Here are some ideas (and maybe future posts) :

I want to use this post to thanks all the people that took the time to answer my numerous questions across Twitter, Github issues, Discord, Zoom, Slack and more recently the AWS CDK Slack community.

I can't list everyone, I ask too many questions 😂, but I want to give a special thanks to Thorsten Hoeger and Kenneth Winner for proofreading this post. I'm very grateful to be in communities of such talented, open-minded and nice people.

This is my first post ever, over the years I greatly benefited from OSS and I want to give back to the community. ❤️

Don't hesitate to ping me on Twitter 🐦 if you want to chat about anything, my DMs are always open!

Julien Goux
My Current GitHub Profile
#github #showdev #career #discuss
Nobody talks about this in the IT world
#beginners #productivity #programming #discuss
What is your favourite ES6 feature?
#javascript #discuss #career #interview

Once suspended, jgoux will not be able to comment or publish posts until their suspension is removed.

Once unsuspended, jgoux will be able to comment and publish posts again.

Once unpublished, all posts by jgoux will become hidden and only accessible to themselves.

If jgoux is not suspended, they can still re-publish their posts from their dashboard.