When I heard Mac OS has made zsh the default shell, then I began to wonder 🤔 ...there must be something someone isn't telling me.

And amma find out today!

The first problem I encountered was deciding what to call it
(zssssh or z-shell🤷). After thinking a bit, I was like "fuck it!, let's get down to business".

The Z shell is a Unix shell that can be used as an interactive login shell and as a command interpreter for shell scripting. Zsh is an extended Bourne shell with many improvements, including some features of Bash, ksh, and tcsh.

I installed zsh with this command:

Then made zsh the default shell ..with this command on the terminal:

And after that, you will be prompted to enter your pc password.

You may need to restart your computer for this to take effect.

Enter zsh on the terminal and hit enter ↵:

...and you will see this message. 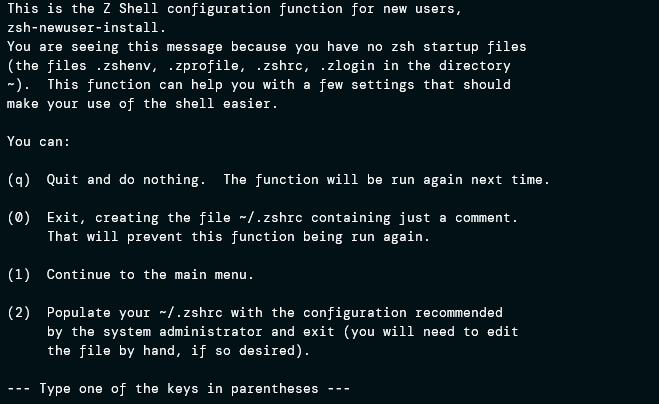 Enter 2 to get the default configuration

Now the zsh is up and running. Over to "Oh My Zsh".

Oh My Zsh is an open source, community-driven framework for managing your zsh configuration. Sounds boring. Let's try again. Oh My Zsh will not make you a 10x developer...but you may feel like one.

you should see an output similar to this, while it installs: 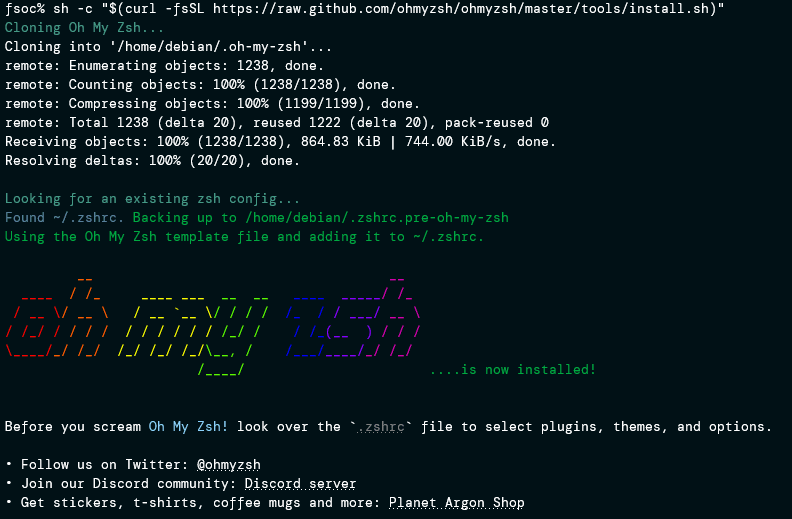 Oh My Zsh is now installed, and we will use the .zshrc file for customizing the terminal

With the .zshrc file you can add plugins and change the theme of your terminal.
The .zshrc file is located at the home directory ~/.zshrc

Open the .zshrc file and find this line:

save the .zshrc file and return to the terminal.

to reload the terminal.

the exec zsh for reloading the terminal is one of the "zsh goodies".

With the web-search plugin you added, you can now google for stuff from the terminal.
Like this:

Open the .zshrc file and find this line:

save the .zshrc file and return to the terminal
Restart the shell or enter this command exec zsh to reload terminal.

And Voila, you have a pretty looking terminal. 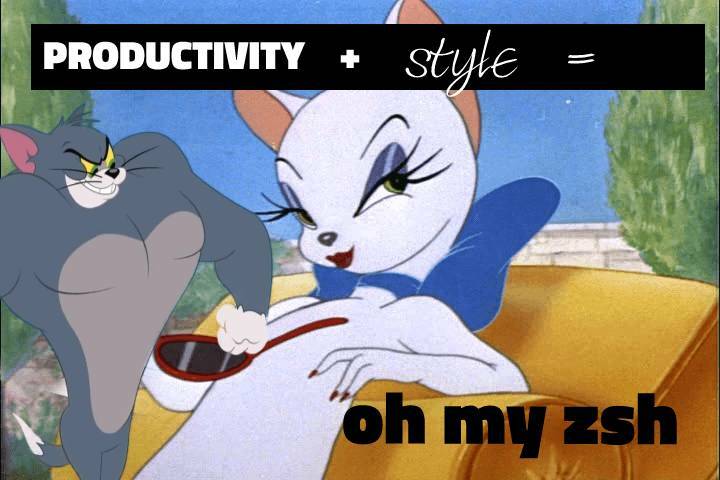 By default, the terminal will display something like this:

Here is how you get rid of the yourmachinename part:

Then go to the terminal and enter exec zsh to reload:

That was how Zsh became my default shell and bash was ...bashed 💥.

If you open up your vscode terminal and it looks like this:

Don't be scared, there is nothing to worry about, it's just some font issue.

Save the file and restart vscode.

And we are all good 🥂

Everything you should know as a Cloud Guru for Storage

John Johnson Okah
There is an ALGORITHM for everything under heaven.
3 Lessons I Learnt from being a Lazy Programmer
#productivity #programming #python #opensource

Once suspended, jjokah will not be able to comment or publish posts until their suspension is removed.

Once unsuspended, jjokah will be able to comment and publish posts again.

Once unpublished, all posts by jjokah will become hidden and only accessible to themselves.

If jjokah is not suspended, they can still re-publish their posts from their dashboard.

Once unpublished, this post will become invisible to the public and only accessible to John Johnson .

Thanks for keeping DEV Community 👩‍💻👨‍💻 safe. Here is what you can do to flag jjokah:

Unflagging jjokah will restore default visibility to their posts.