So, in the previous two parts of this post (if they can be considered so instead of two posts), I was playing around with FreeBSD in a virtual machine in order to determine how different it is from using Ubuntu or some other Debian-based Linux distributions. For the moment, I've been using that as a server (more or less), accessing it via SSH and installing a FAMP, or Apache along with PHP and MySQL under FreeBSD. But I'm not done yet, as I also want to check how hard it will be to install a desktop environment and test it like that.

So, first of all, I should try using pkg in order to try to find some packages related. I'll try searching popular Linux desktops, such as GNOME, KDE, etc. 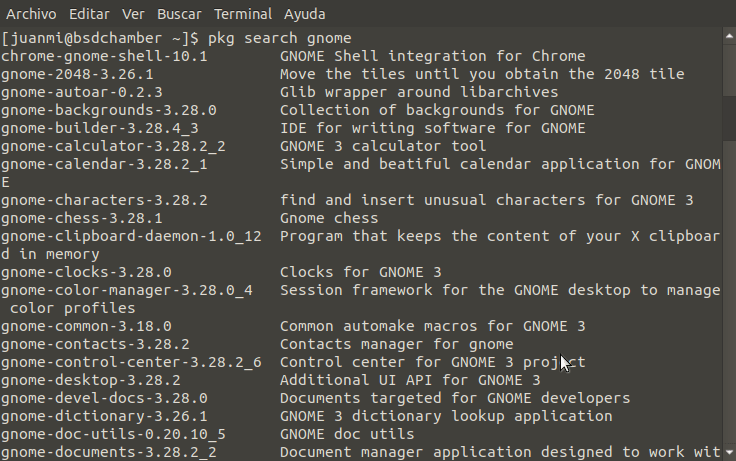 I don't know whether I should be surprised by having found actual results related to GNOME, but it's pretty good news, regardless, as this tells us FreeBSD may have really similar desktop experiences to what Linux users have. Now, I'm not sure which is the correct package to install GNOME 3. It seems like "gnome3-3.28_2" is the good one, but I still want to search what's available for KDE. 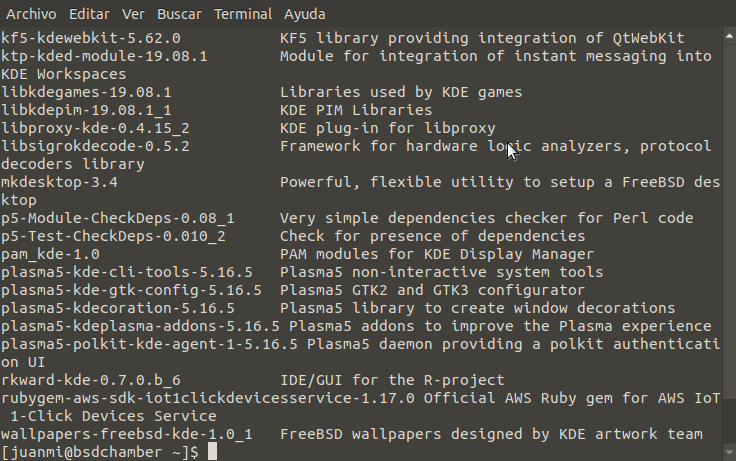 And it looks like Plasma is here, too! After looking around in the results, I see that "kde5-5.16.5.19.08.1" looks like the most likely package to install KDE Plasma as a whole. Regardless, I'm going to proceed with GNOME, and maybe I'll try Plasma next, just to see whether the default configuration can handle two desktops installed at the same time or additional steps are required. 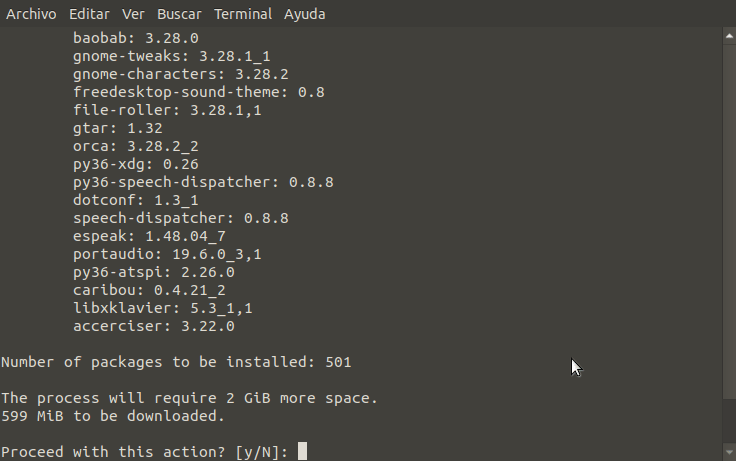 And this, ladies and gentlemen, is the fattest part of any desktop Linux installation: the desktop itself. Oh well, I'll go ahead and check the VM's screen while the installation goes on, just to see whether something funny happens. 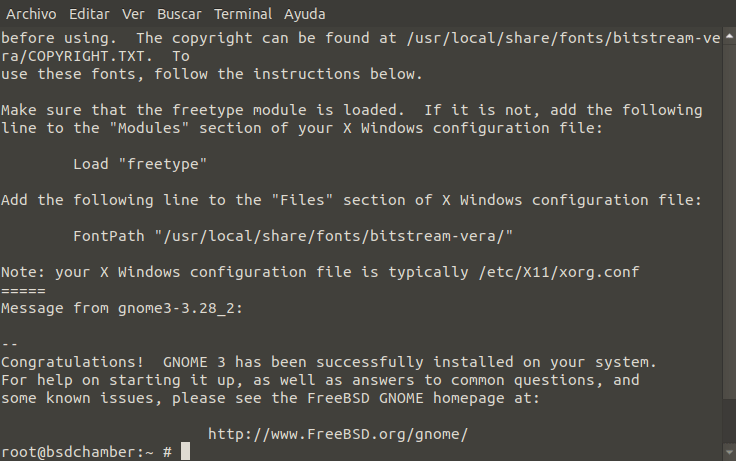 Around 10-15 minutes later, the scrolling stops and I get what follows. Well, this is just the end of it, as there's a bunch of messages from the other packages that have been installed along with GNOME. I'll just restart the machine and see if any magic happens, hoping that the installation has taken care of everything. 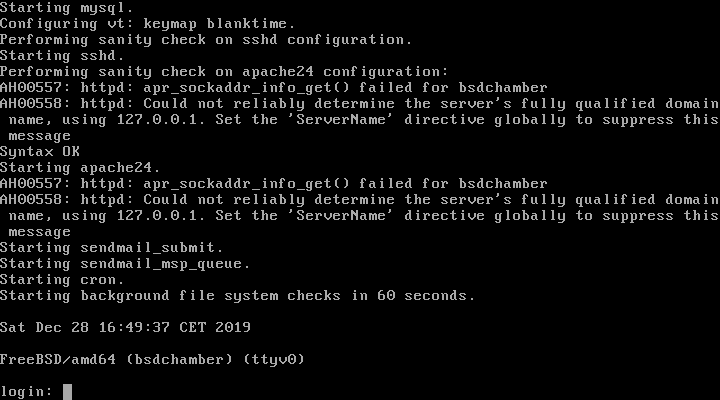 Unlucky me, I guess it doesn't start it right away by default, not even after I log in as any of the users. I guess I'll have to check GNOME's page on FreeBSD's website. Apparently, the final step that was required for GNOME to load after rebooting is right here, which is just another line in /etc/rc.conf: 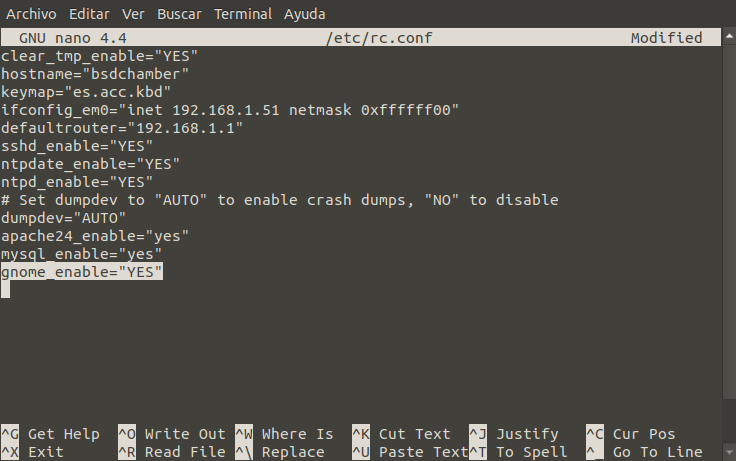 After doing that, I reboot the machine yet again and... Nothing, I'm still getting just the text mode. I check the manual page again... And I see the "startx" command, which I'm apparently missing since there's no manual page for that, and the command isn't recognized, either. I prefer to check "X11" in pkg, as I think that's the environment related to that command. 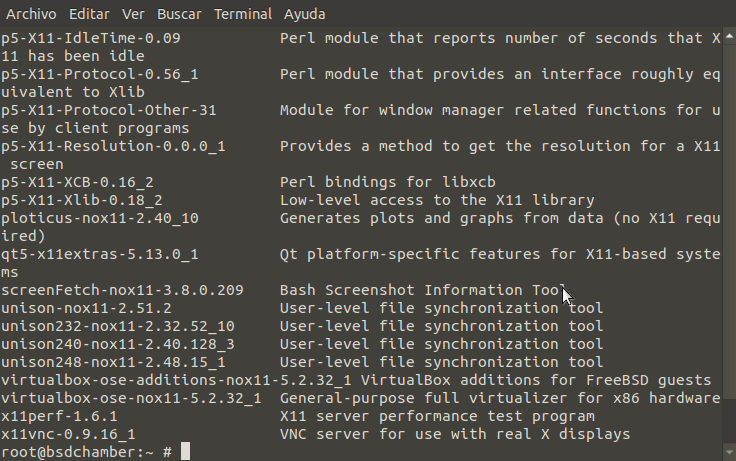 Interesting, there are some packages for virtual machines. I guess I'll have to try some of those. 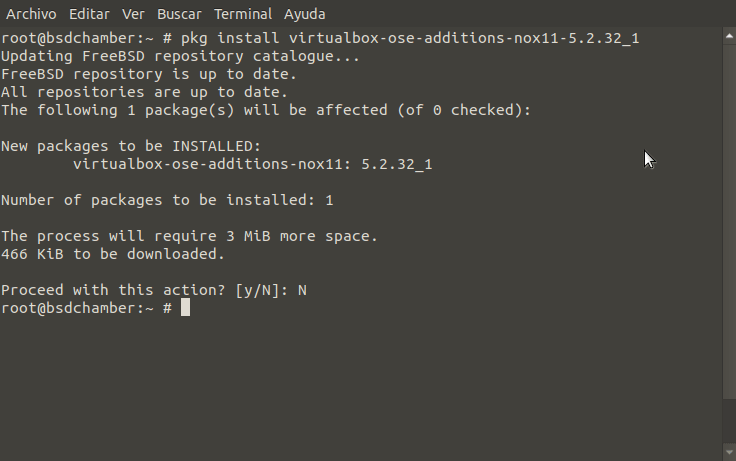 Well, it doesn't seem to be what I need, so I'll just cancel that and try that test program instead, just to see whether things change in there. 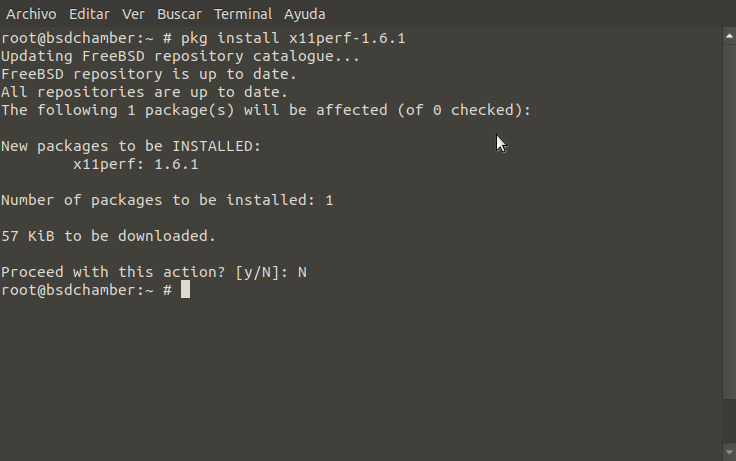 Nothing, it looks like whatever that I thought I'm missing is already installed, and I can't find something related to X11 in the manual, either, so I try listing the statuses for the services the manual page lists for starting GNOME without requiring a system restart, and this is what I get: 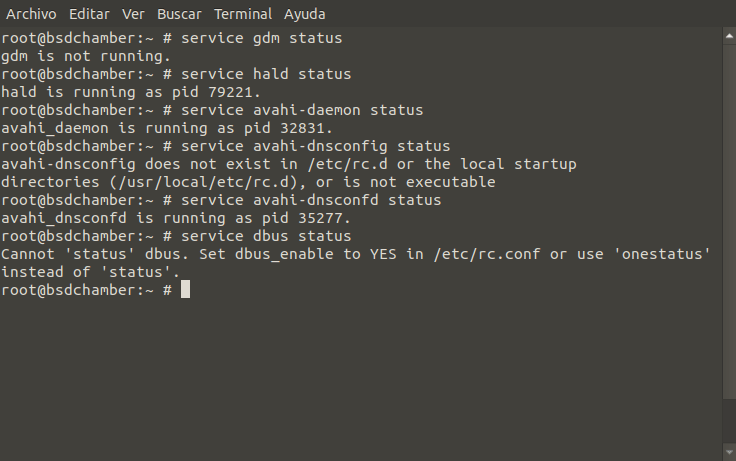 So "gdm" is not running and "dbus" needs to be added to the rc.conf file. I'm pretty sure that's the piece of the puzzle I'm missing, so I'll add that and try again. One reboot later... Nothing, still out of luck, so I'll try checking GNOME's service itself. 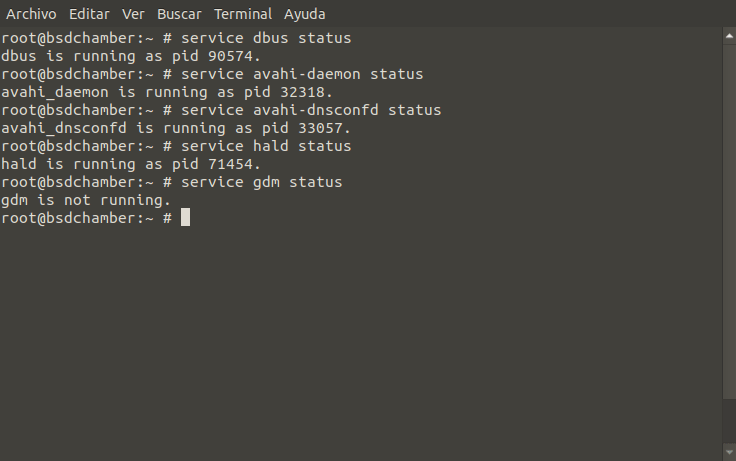 It looks like GDM is still not running. I try starting it manually, and the only response I get is "Starting gdm". However, while trying to log in to see whether something changes, I see there's "service -e", which will list all services that will start on boot, I try it and... 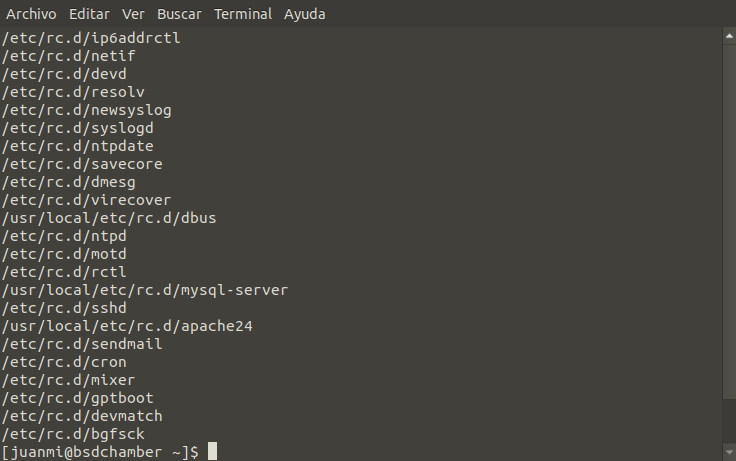 Sure enough, there's no GNOME to be seen anywhere. I guess I should look for "gnome" in /usr/local/etc/, just to see if there's something that I'm missing. 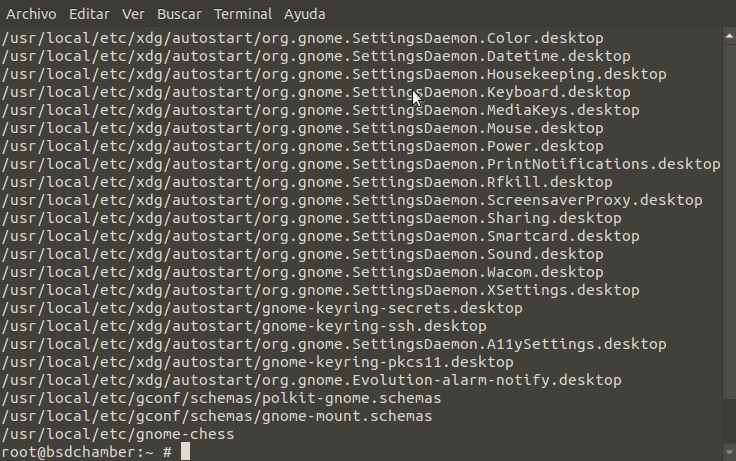 There is, indeed, something, but probably not what I need to start GNOME up. Just as a final attempt, I'll try to install X.Org, since I think that's the server lots of desktops use as their basis. 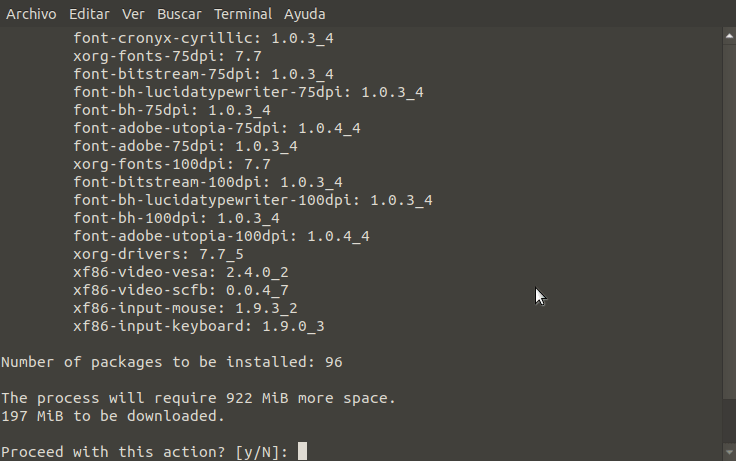 It seems that the package was missing, so I'll go ahead and install it. As long as I don't have to deal with the older desktop environments... 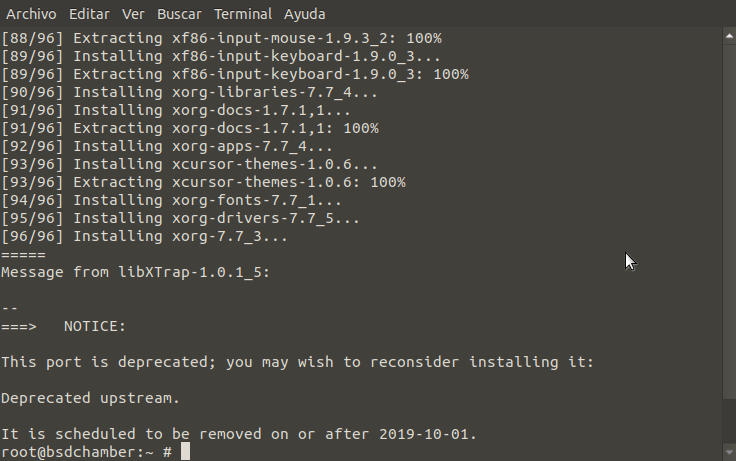 Well, that's done, even though that package doesn't seem too happy about having been installed. Oh well, I'll just reboot and see if, this time, the magic does happen. 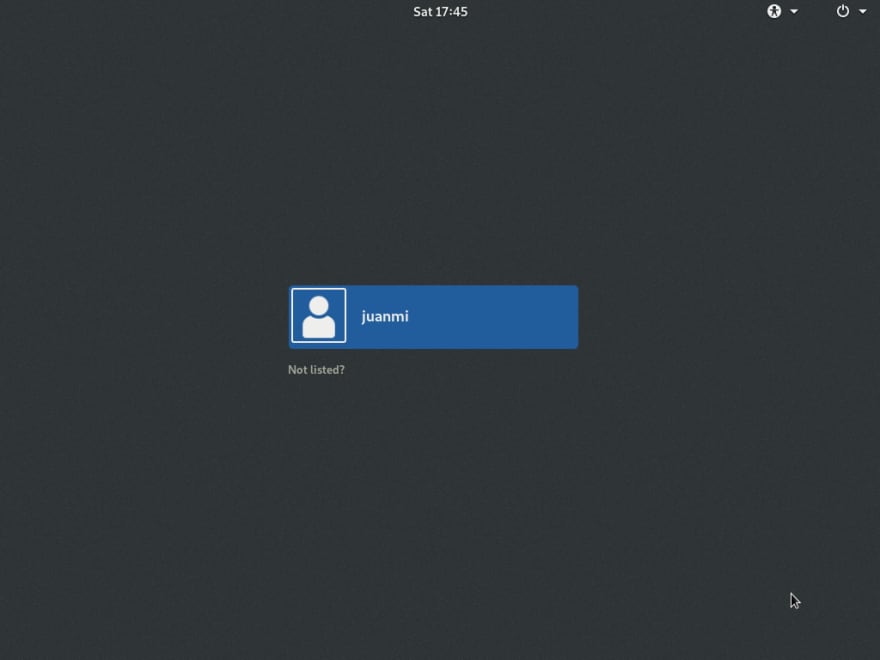 And it does! Finally, I can use a more graphical environment to use this UNIX computer. Luckily, I can log in to my user just as if I were using a Linux machine. 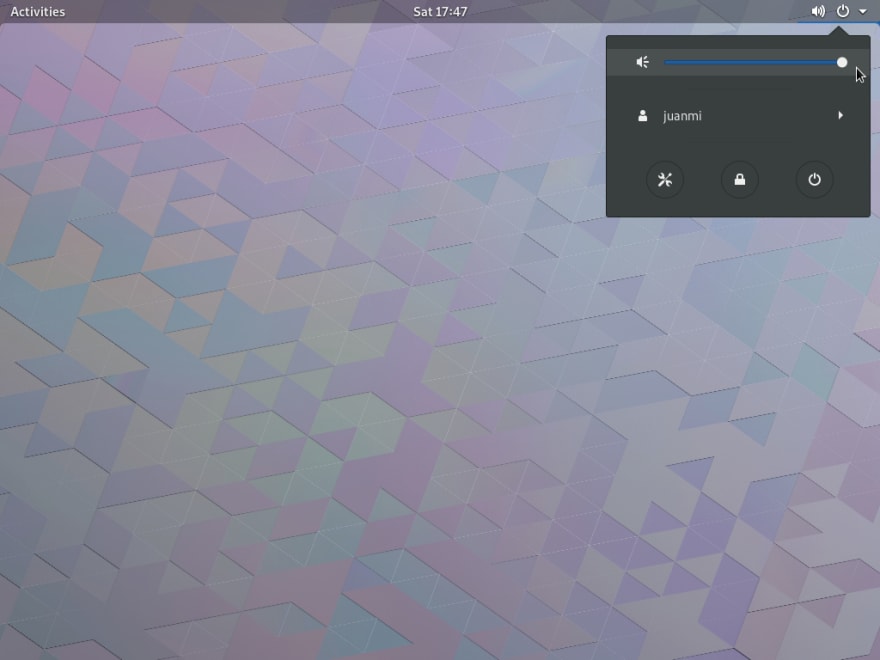 The first thing I try is playing around with the volume control, and sure enough, I can hear some sound, so probably the web browser can load regular pages as well. 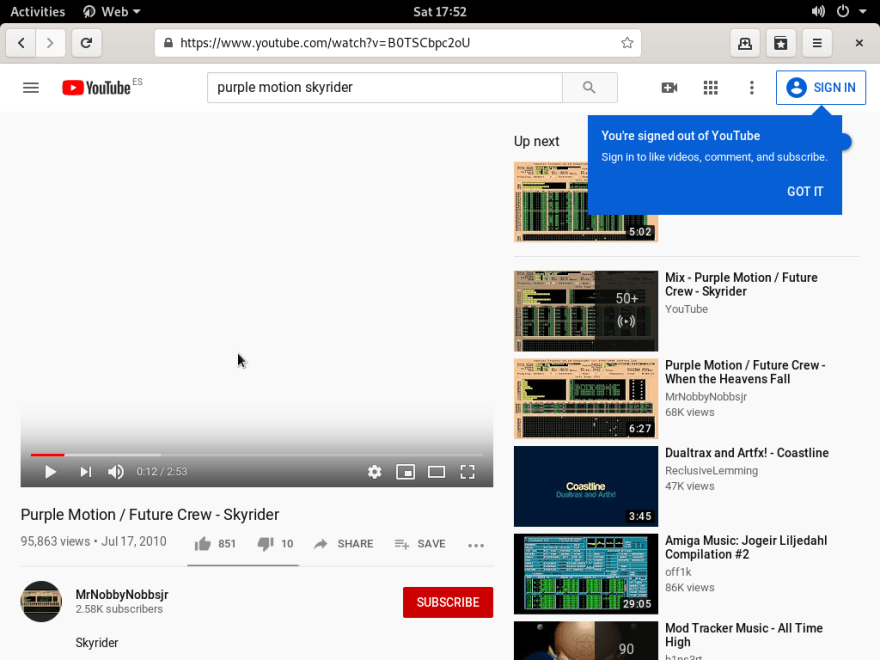 Well, I can enter YouTube and sort of watch videos, even though the pre-installed web browser (which isn't Firefox, by the way) isn't capable of handling it properly. I also notice that the environment itself, just upon opening a few windows, gets very laggy, most likely due to the little amount of VRAM that VirtualBox assigns to a FreeBSD's machine by default. So I increase it to the maximum to see whether that gets better or not and that works... even though the web browser still glitches a lot while trying to play the video, so I guess it's just not working properly.

Also worthy of mention is the fact that logging in with GNOME won't automatically create the folder system Linux desktops are known for, such as Documents, Images, Desktop, etc. And of course, there's no app store to be found, so this is far from ideal for the average person to use who isn't willing to learn how to use pkg to search and install any software. Oh, and did I mention there's no option to add icons or files to the desktop? That's likely due to the fact the "Desktop" folder is missing, but that's probably annoying as well.

So now that GNOME is more or less usable, I'll try installing KDE directly from the desktop's terminal, just so that you can see how it looks by default. 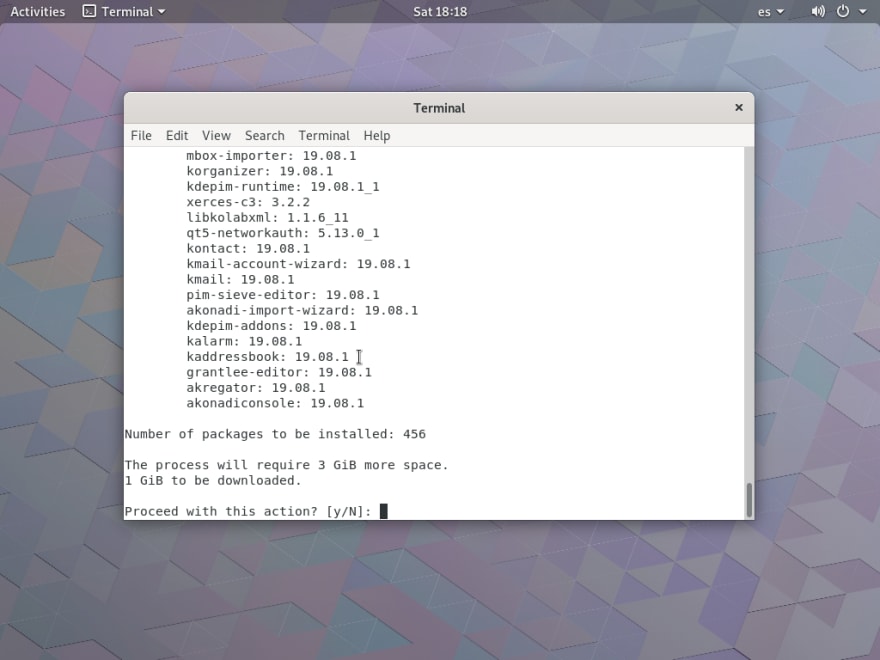 Yeah, it's not pretty, but I do guess it could be worse than that. It's pretty much just the same GNOME terminal you'd find in your default Ubuntu installation, even though the color scheme is a lot uglier and simpler. In fact, csh behaves just as badly with that terminal as the one I'm using, 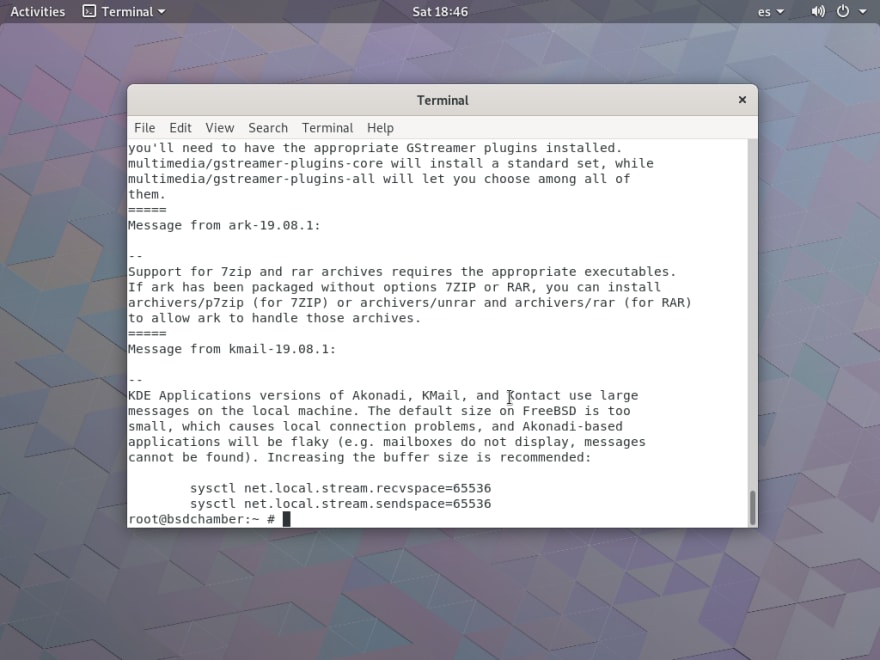 So this one obviously takes longer to install, around 20-25 minutes, but it's already done, so I'll try rebooting in order to see whether something is different or, even better, KDE is also listed when logging in. 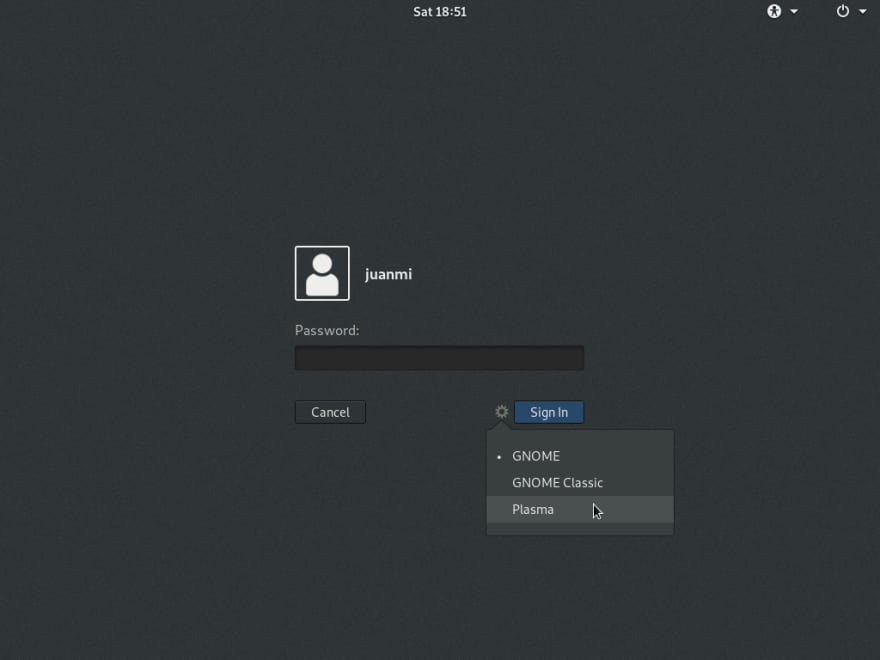 Well, it looks like this one is going to be a lot simpler than installing GNOME, probably because I already did the hardest work before. So I try entering my password while having selected "Plasma" and... 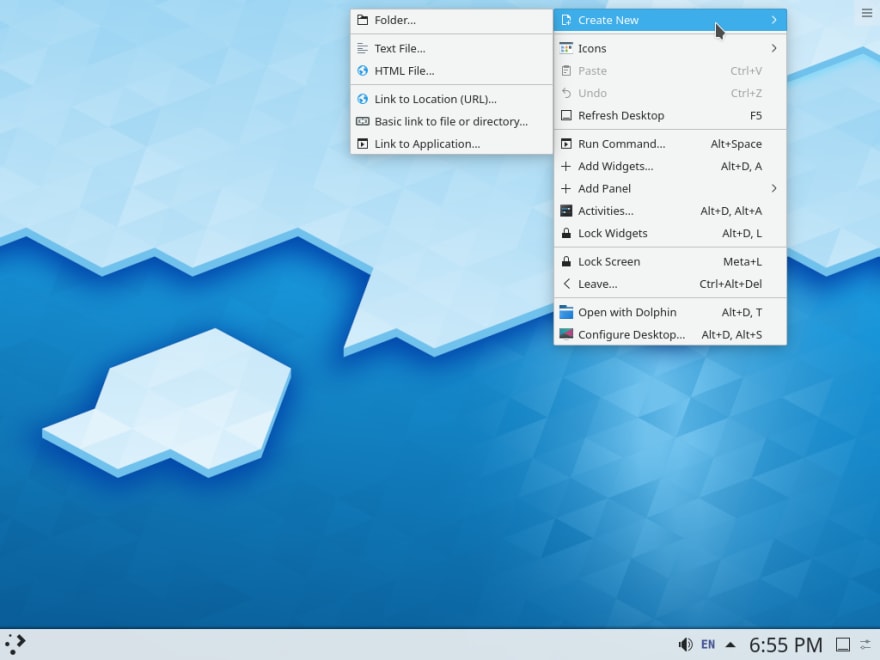 This looks pretty similar to what I would have found after installing Kubuntu or any KDE-based distro. Oddly enough, it seems like Plasma has created the Desktop folder in order to place icons and whatnot inside. Also, there's also Discover, KDE's app store, but it doesn't seem to work at all. Again, not ideal for someone who isn't very experienced with computers. 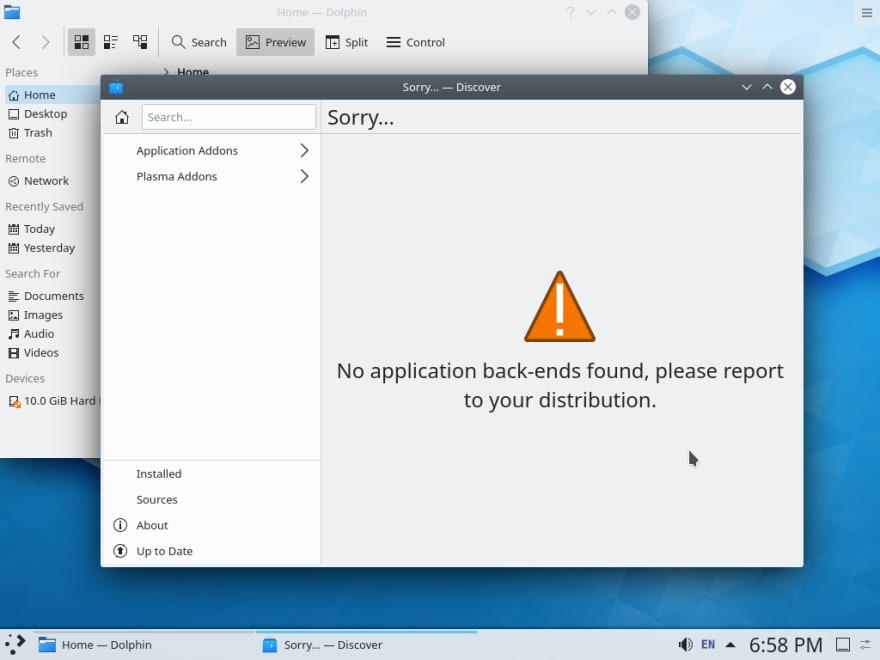 Since I don't hear any sound when playing around with the volume control, I navigate through KDE's configuration and manage to find an audio test, which does seem to work, even though it sounds a bit choppy at times.

Once again, I test the pre-installed web browser by making it play a YouTube video and... 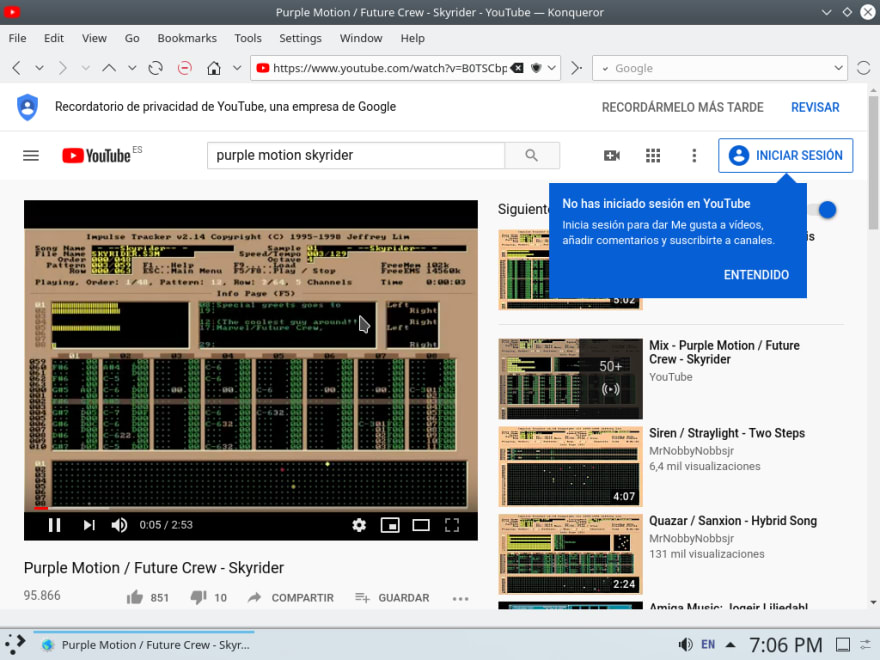 Well, it seems to work a lot better than GNOME's browser, but this one can't really play the video at full speed, probably because of the fact that either it doesn't have proper drivers to handle the VM's graphics card, or the VM itself can't really do a lot in terms of performance as KDE isn't likely that well optimized for FreeBSD.

Overall, by just taking a quick look at both KDE and GNOME, I'd say KDE would manage to give a better experience to the user without having to touch a lot of things, especially when it comes to the configuration panel since KDE itself looks a bit more polished and less bare than GNOME by default. Maybe I'm a bit biased, as I prefer KDE over GNOME, but both are usable while not ideal when compared to Linux desktop distributions or even desktops by themselves.

My thoughts on FreeBSD

Well, after spending almost three posts doing some basic things with FreeBSD, I think I can point out some thoughts about actually using it, both from the terminal and from a desktop. I'm aware of the fact I might be wrong since, just in case someone didn't notice, I'm a lot closer to having a first impression about it than having actual experience with it and being able to speak with authority on the subject.

In conclusion, FreeBSD is a quite interesting operating system, even though I wouldn't recommend it in general except for a few rare scenarios. One would be on a desktop, where you could try some of the lighter environments such as MATE or Xfce, in order to check whether they run any better than in Ubuntu or Debian, provided that you're lucky enough to have support for your hardware. I could advise to give it try a lot more confidently on an older server since it is a bit lighter by default than most Linux distributions. Obviously, I wouldn't recommend it by any means to anyone that doesn't have a lot of experience moving around the terminal or even with computers, as things are harder to achieve in FreeBSD than in Linux.

What is a Makefile and how do I use them

How to Create and Execute Shell Scripts Automatically with WayScript

Once suspended, jmmedina00 will not be able to comment or publish posts until their suspension is removed.

Once unsuspended, jmmedina00 will be able to comment and publish posts again.

Once unpublished, all posts by jmmedina00 will become hidden and only accessible to themselves.

If jmmedina00 is not suspended, they can still re-publish their posts from their dashboard.

Once unpublished, this post will become invisible to the public and only accessible to Juan Miguel Medina Prieto.

Thanks for keeping DEV Community 👩‍💻👨‍💻 safe. Here is what you can do to flag jmmedina00:

Unflagging jmmedina00 will restore default visibility to their posts.