tmux is a terminal multiplexer: it enables a number of terminals (or windows), each running a separate program, to be created, accessed, and controlled from a single screen.

tmux may be detached from a screen and continue running in the background, then later reattached.

It allows you to easily manage separate terminal sessions inside a single terminal window.

tmux can connect to a server, and multiple clients can be connected to the same session, simultaneously exchanging their input and display. 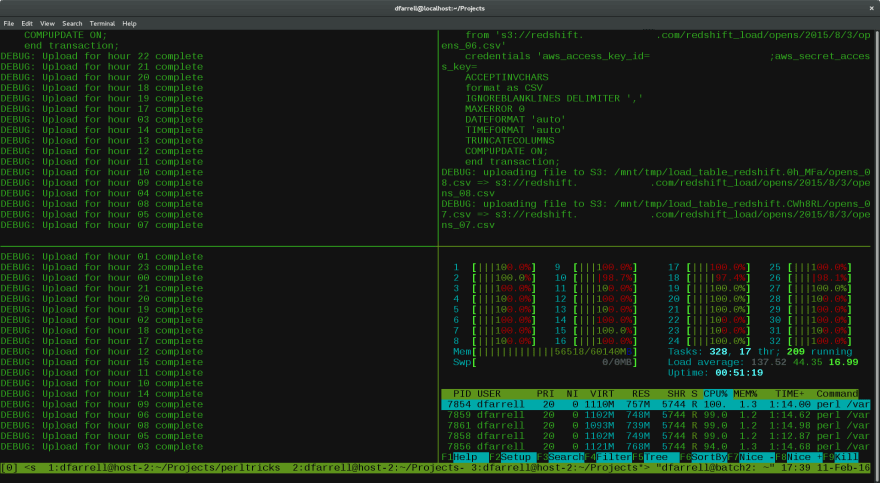 You can use these commands and shortcuts to work with tmux in Linux. From the command line:

I've used tmux for years, and it has become an essential part of my work flow. I couldn't imagine editing code without it. If you want to practice Linux commands, you can use these exercises

tmux is a terminal multiplexer: it enables a number of terminals to be created, accessed, and controlled from a single screen.

• Splitting a terminal window into horizontal or vertical panes.
• The ability for windows to be re-ordered by the user, and to be assigned names.
• Executing shell commands in any pane, and running custom commands in response to window changes.
• Detaching and reattaching a session (allowing the user to leave terminals behind, and then return to them).
• A powerful configuration language.

tmux is very useful for people who commonly work on remote machines via ssh.

Why did I pick tmux over screen and a terminal multiplexer? Three reasons.

How to Install Laravel on Ubuntu 20.04 LTS

[Solved]Unable to write to wp-config.php file on linux ubuntu

How to install Metasploit in termux No Error 2022

Once unpublished, this post will become invisible to the public and only accessible to jones268.

Thanks for keeping DEV Community safe. Here is what you can do to flag jones268:

Unflagging jones268 will restore default visibility to their posts.