This is a post about using Windows Task Scheduler to automate the execution of NodeJS scripts, and other NPM / Yarn based tasks. If you don't use Windows, this post is probably not for you (but feel free to read anyways 🤷‍♀️)

Tons of reasons! Maybe you are trying to emulate a production environment that has NodeJS scripts as scheduled CRON tasks. Or, for your own productivity or fun you want to script things to happen based on Window events.

For example, you could write a NodeJS script that talks to your project tracker of choice via API and stops any running timers when you lock your computer to take a break.

Why not just use crontab under WSL?

Good question! If you have WSL (Windows Subsystem for Linux) installed, and you only want to trigger actions based on time, then you should totally give crontab under WSL a shot!

Although there used to be issues with it (in past versions, WSL used to kill background tasks when you closed the console), I just gave it a shot, and had success. If there is interest, I might make a separate post about how to setup crontab under WSL.

However, Task Scheduler still has value as a separate tool, since more than just time can be used as a trigger; you can execute tasks based on computer unlocks, power events, and more. You can't do that with crontab. 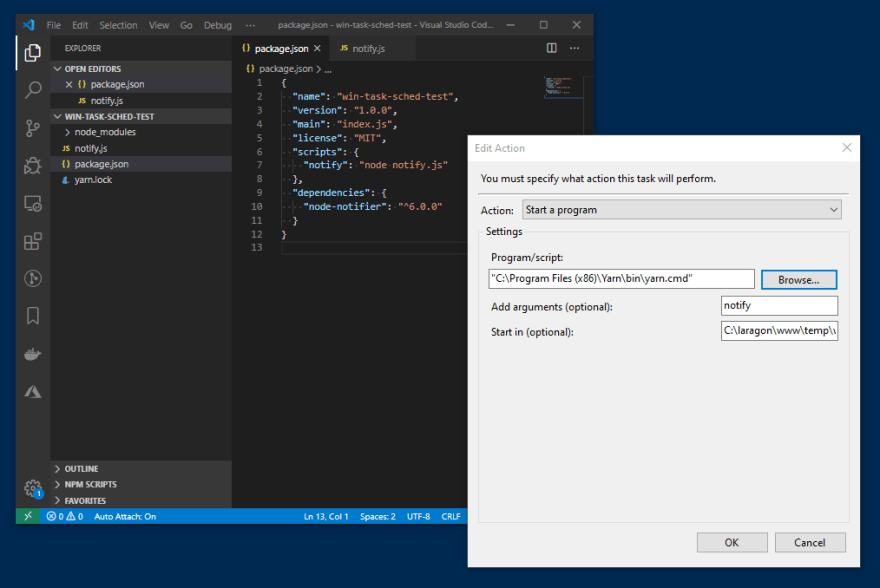 If you are concerned about keeping track of the results of what ran, you can also capture the result of anything spit out to the console by using >> task_log.txt or something like that.

👩‍🍳 - You can combine actions and triggers

One nice feature of task scheduler that I did not notice immediately is that it does not have to be a 1:1 mapping of task-trigger-action.

For example, you can group ten different actions under a single task with a shared trigger.

✨ - You can use Git Bash for more advanced scripting

Instead of targeting NPM, Yarn, or Windows CMD, if you have Git Bash (comes packaged with Git for Windows), you can it as the target "Program/Script", and then execute a more advanced command that uses some bash tools. For example, a sample task that performs some backups for a project might look like:

If you see this error, you have probably selected the wrong application as the Program/Script to execute. For example, using /yarn instead of yarn.cmd will result in this error.

⚙ - Stop the Cmd window from popping up

If the black windows Command prompt window keeps popping up whenever your task runs, you need to change one of the basic settings:

There is no harm in having it show up; but it might get annoying if your task is scheduled to run frequently.

⏰ - How to schedule more frequently than every 5 minutes

You might have already noticed that the smallest interval that shows up in the repeat task every duration picker, under trigger settings, is 5 minutes. Uh-oh!

Actually, this is an easy fix - you can actually type a custom interval in that box! So if you wanted an entry that was equivalent to a CRON of * * * * * (every minute), just type in the box 1 minute and set for a duration of to Indefinitely. 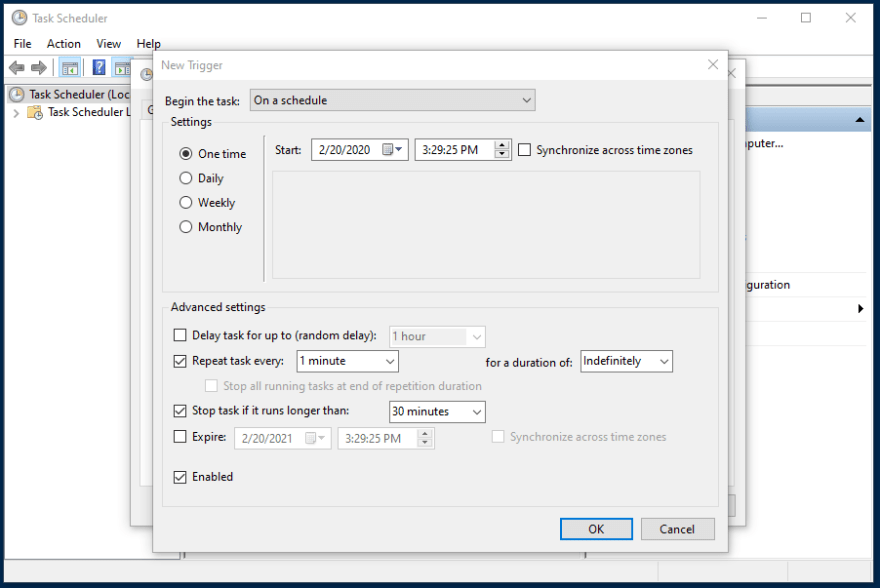 Since this is likely to come up in the comments (I can already hear the annoying response; ''why don't you use a real operating system? lol!") - yes, Task Scheduler is not a perfect replacement for CRON on windows. But it is not really meant to be, and this post is not advocating as such either.

Plus, you can use crontab under WSL now (see my note under "why?").

I hope this was helpful! This is a bit different from what I normally write about, but felt compelled to publish it as I had trouble finding existing resources on the topic. 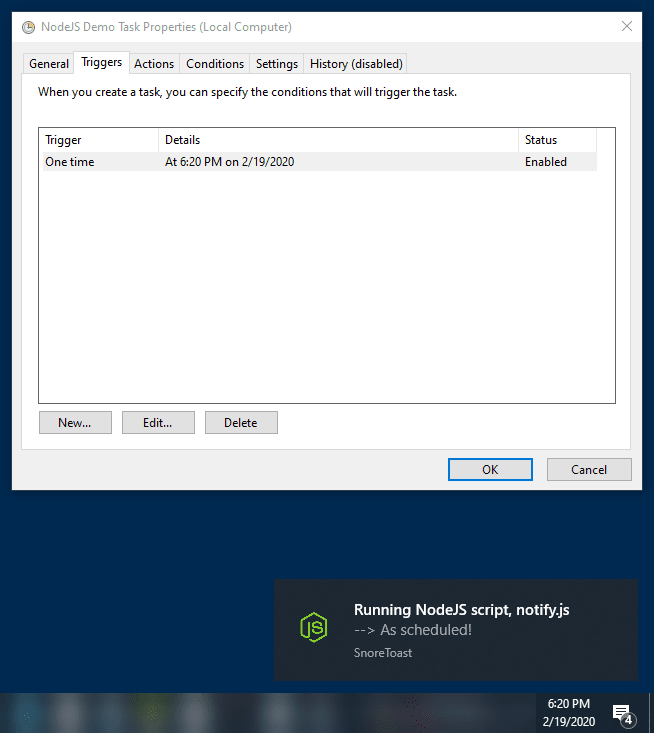 How to Create a Glassmorphism Effect with Pure CSS

Passwordless Login For Your PHP Project

Once suspended, joshuatz will not be able to comment or publish posts until their suspension is removed.

Once unsuspended, joshuatz will be able to comment and publish posts again.

Once unpublished, all posts by joshuatz will become hidden and only accessible to themselves.

If joshuatz is not suspended, they can still re-publish their posts from their dashboard.

Once unpublished, this post will become invisible to the public and only accessible to Joshua Tzucker.

Thanks for keeping DEV Community 👩‍💻👨‍💻 safe. Here is what you can do to flag joshuatz:

Unflagging joshuatz will restore default visibility to their posts.