JavaScript was designed as an embedded scripting language. JavaScript programs do not run as stand-alone applications, but as scripts in the context of a larger application. The flagship example is, of course, the web browser. A browser can have many windows and tabs running multiple web applications, each responding to various inputs and stimuli: user actions via keyboard, mouse, or touch, the arrival of data from the network, or timed alarms. These
events can occur at any point—even simultaneously—during the lifetime of a web application. And for each kind of event, the application may wish to be notified of information and respond with custom
behavior.
JavaScript’s approach to writing programs that respond to multiple concurrent events is remarkably user-friendly and powerful, using a
combination of a simple execution model, sometimes known as event-
queue or event-loop concurrency, with what are known as asynchronous APIs. Thanks to the effectiveness of this approach, as well as the
fact that JavaScript is standardized independently of web browsers, JavaScript is used as the programming language for a variety of other
applications, from desktop applications to server-side frameworks such as Node.js.
Curiously, the ECMAScript standard has, to date, never said a word
about concurrency. Consequently, this chapter deals with “de facto” characteristics of JavaScript rather than the official standard. Nevertheless, most JavaScript environments share the same approach to concurrency, and future versions of the standard may standardize on
this widely implemented execution model. Regardless of the standard,
working with events and asynchronous APIs is a fundamental part of
programming in JavaScript.

JavaScript programs are structured around events: inputs that may
come in simultaneously from a variety of external sources, such as interactions from a user (clicking a mouse button, pressing a key, or touching a screen), incoming network data, or scheduled alarms. In
some languages, it’s customary to write code that waits for a particular input:

The console.log API is a common utility in JavaScript platforms for
printing out debugging information to a developer console.

Functions such as downloadSync are known as synchronous, or blocking:
The program stops doing any work while it waits for its input in this case, the result of downloading a file over the internet. Since the computer could be doing other useful work while it waits for the download to complete, such languages typically provide the programmer with a way to create multiple threads: subcomputations that are executed
concurrently, allowing one portion of the program to stop and wait for (“block on”) a slow input while another portion of the program can carry on usefully doing independent work.

In JavaScript, most I/O operations are provided through asynchronous, or nonblocking APIs. Instead of blocking a thread on a result, the programmer provides a callback (see Item 19) for the system to invoke once the input arrives:

Rather than blocking on the network, this API initiates the download process and then immediately returns after storing the callback in an internal registry. At some point later, when the download ha s completed, the system calls the registered callback, passing it the text of the downloaded file as its argument.
Now, the system does not just jump right in and call the callback the instant the download completes. JavaScript is sometimes described as providing a run-to-completion guarantee: Any user code that is currently running in a shared context, such as a single web page in a browser, or a single running instance of a web server, is allowed to finish executing before the next event handler is invoked. In effect, the system maintains an internal queue of events as they occur, and invokes any registered callbacks one at a time.

The image below shows an illustration of example event queues in client-side and server-side applications. As events occur, they are added to the end of the application’s event queue (at the top of the diagram). The JavaScript system executes the application with an internal event loop, which plucks events off of the bottom of the queue—that is, in the order in which they were received—and calls any registered Java Script event handlers (callbacks like the one passed to downloadAsync above) one at a time, passing the event data as arguments to the handlers. 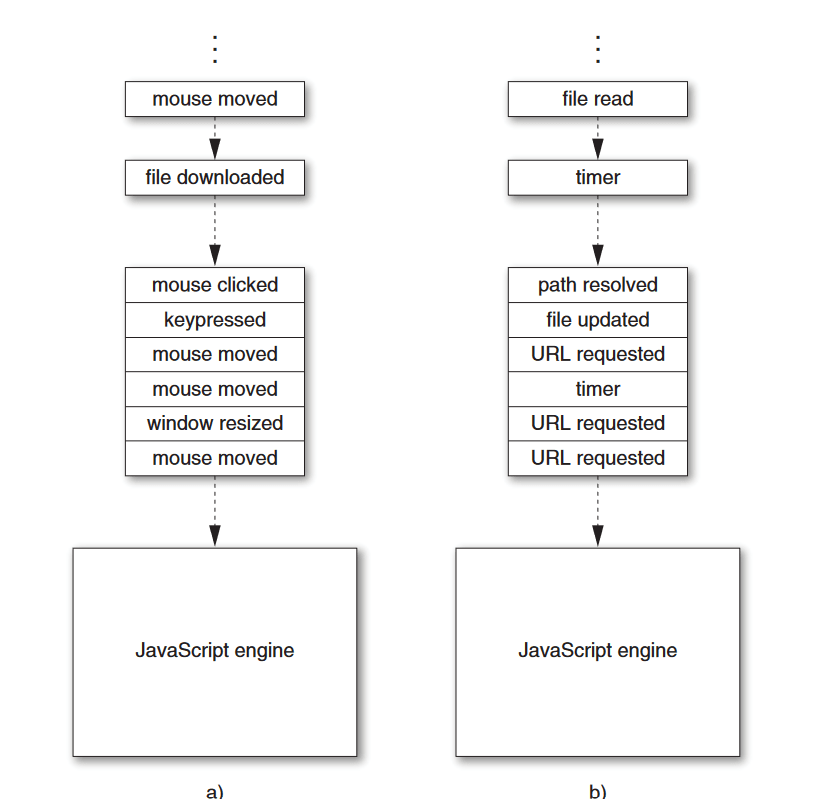 Example event queues in a) a web client application and
b) a web server.

The benefit of the run-to-completion guarantee is that when your code runs, you know that you have complete control over the application state: You never have to worry that some variable or object property will change out from under you due to concurrently executing code. This has the pleasant result that concurrent programming in Java-Script tends to be much easier than working with threads and locks in languages such as C++, Java, or C#.

Conversely, the drawback of run-to-completion is that any and all code you write effectively holds up the rest of the application from proceeding. In interactive applications like the browser, a blocked event handler prevents any other user input from being handled and can even prevent the rendering of a page, leading to an unresponsive user experience. In a server setting, a blocked handler can prevent other network requests from being handled, leading to an unresponsive server.

The single most important rule of concurrent JavaScript is never to use any blocking I/O APIs in the middle of an application’s event queue. In the browser, hardly any blocking APIs are even available, although a few have sadly leaked into the platform over the years. The XMLHttpRequest library, which provides network I/O similar to the downloadAsync function above, has a synchronous version that is considered bad form. Synchronous I/O has disastrous consequences for the interactivity of a web application, preventing the user from interacting with a page until the I/O operation completes.

By contrast, asynchronous APIs are safe for use in an event-based setting, because they force your application logic to continue processing in a separate “turn” of the event loop. In the examples above, imagine that it takes a couple of seconds to download the URL. In that time, an enormous number of other events may occur. In the synchronous implementation, those events would pile up in the event queue, but the event loop would be stuck waiting for the JavaScript code to finish executing, preventing the processing of any other events. But in the asynchronous version, the JavaScript code registers an event handler and returns immediately, allowing other event handlers to process intervening events before the download completes

In settings where the main application’s event queue is unaffected, blocking operations are less problematic. For example, the web platform provides the Worker API, which makes it possible to spawn concurrent computations. Unlike conventional threads, workers are executed in a completely isolated state, with no access to the global scope or web page contents of the application’s main thread, so they cannot interfere with the execution of code running in from the main event queue. In a worker, using the synchronous variant of XMLHttpRequest is less problematic; blocking on a download does prevent the Worker from continuing, but it does not prevent the page from rendering or the event queue from responding to events. In a server setting, blocking APIs are unproblematic during startup, that is, before the server begins responding to incoming requests. But when
servicing requests, blocking APIs are every bit as catastrophic as in the event queue of the browser.

Once suspended, jrmatanda will not be able to comment or publish posts until their suspension is removed.

Once unsuspended, jrmatanda will be able to comment and publish posts again.

Once unpublished, all posts by jrmatanda will become hidden and only accessible to themselves.

If jrmatanda is not suspended, they can still re-publish their posts from their dashboard.

Once unpublished, this post will become invisible to the public and only accessible to Ben Matt, Jr..

Thanks for keeping DEV Community 👩‍💻👨‍💻 safe. Here is what you can do to flag jrmatanda:

Unflagging jrmatanda will restore default visibility to their posts.