Looking into designing platform and new architectures in the cloud can be quite intimidating especially when it’s your first time. Today I want to speak about the NAT Gateways, what is it? How it works? When to use it, etc…

What does NAT even mean?

So first things first, what is actually a NAT?? If we listen to papy wikipedia:

Network address translation (NAT) is a method of remapping one IP address space into another by modifying network address information in the IP header of packets while they are in transit across a traffic routing device.[1] The technique was originally used as a shortcut to avoid the need to readdress every host when a network was moved. It has become a popular and essential tool in conserving global address space in the face of IPv4 address exhaustion. One Internet-routable IP address of a NAT gateway can be used for an entire private network. Sources: Wikipedia

That’s it! As Grandpa said, it’s pretty common to see an infrastructure using NAT Gateways, especially these days with the Cloud (because of the IPv4 exhaustion). In the cloud, there’s one rule. Keep everything private (at least as much as possible).

Commonly when you start playing with the ☁️, you’ll create one instance, two, etc… but to access directly to these instances, you will setup those with a Public IP, it’s easier. Then your infra gets a bit more mature (and you as well) and you realize that using Public IPs might turn against you if you get a bit too permissive with firewall rules (or security groups). So you decide to move everything into a private subnet (only accessible inside your virtual private cloud) and use the protagonist of this article. THE NAT GATEWAY 🎉.

We are quite lucky, cloud providers sells specific instances or services to take care of this for us. Too handy. But at the end, how is this actually working? Let’s say you followed the instruction of your cloud providers to have a NAT. 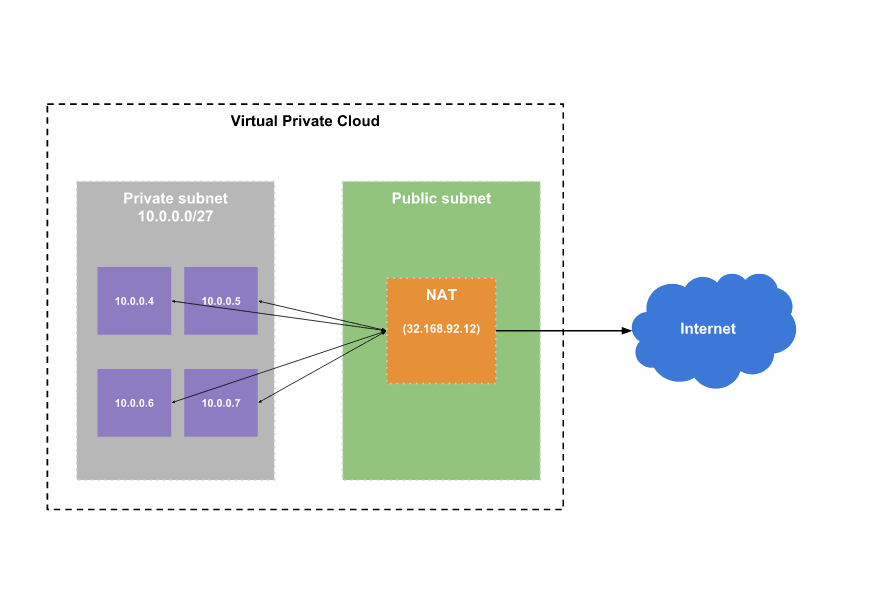 As you can see in the diagram, every outbound connection goes through the NAT Gateway and goes back to the specific instance. My question is how? The instance has no public IP, so the server on the internet when he does receive a packet, sees only the NAT instance’s IP. So how does a NAT gateway works?

How does a NAT gateway work?

So as grandpa said, the NAT Gateway inject its own address inside each packet so the external server knows where to send back the packet ( Spoiler: To the NAT Gateway).

But how does the NAT knows where to send the packet back?

Normally you should see here an amazing SVG animation but dev.to does not look like to support it...

So what happen is:

You can imagine there could be some clash if the red and the blue instance queries the exact same endpoint, the NAT will not know where to redirect the response.

So I was thinking to change the source port for a random one so we would know to which host redirect this request! I read a bit more on the internet that’s actually what’s happening (so pretty proud of myself there 😄)

Using NATs allows us to keep our instances “private” and still give us external traffic. But there must be some limitation to it. Of course there is. During the second step of the translation (aka registration of the packet in the NAT table), the NAT Gateway will allocate a random port for the response of the server. The problem is, let’s say you have 20 servers running 20 services that sends 10 requests per second to external services. Sadly those external services gets unreachable, the connection will wait for a timeout of… let’s say 15 seconds. In less than 10 seconds, the NAT gateway will report unhealthy or at least unable to process any more requests.

You used all the ephemeral ports available on the NAT. 💥

Let’s do some math. We create 20 * 20 * 10 requests per seconds aka 4000requests/s. So each requests open an ephemeral port in the NAT. 4000 ports opened. Second second 4000 others, third second you have already 12000 ephemeral ports opened. It will vary of your operating system but according to Wikipedia:

Many Linux kernels use the port range 32768 to 61000. (The effective range is accessible via the /proc file system at node /proc/sys/net/ipv4/ip_local_port_range)

So roughly 28232 ports I would say (just guessing). That’s our maximum of ephemeral ports that can be opened. Well congratulations, we exploded the limit and we’ll have a lots of problems after that. Glad, it was just a role play and not an actual outage 😅.

Et voila! We saw how a NAT Gateway behave and its limitation. They are one of the core components of an infrastructure in the ☁️ so it’s pretty important to have at least a basic knowledge of what they are used for. Sur ce, codez bien!

Once suspended, juan__wolf will not be able to comment or publish posts until their suspension is removed.

Once unsuspended, juan__wolf will be able to comment and publish posts again.

Once unpublished, all posts by juan__wolf will become hidden and only accessible to themselves.

If juan__wolf is not suspended, they can still re-publish their posts from their dashboard.

Once unpublished, this post will become invisible to the public and only accessible to Jean-Loup Adde.

Thanks for keeping DEV Community 👩‍💻👨‍💻 safe. Here is what you can do to flag juan__wolf:

Unflagging juan__wolf will restore default visibility to their posts.