On my free time I love to create game prototypes using C# in Unity. One of these prototypes is a turn-based game where I need to have multiple game states and a fine control over them.

I started working on a typical finite state machine (FSM) for controlling the game scenario and player input in different game modes, such as battle and exploration.

Immediately I started to stress about how bloated the single state machine would become as the codebase grows in size. This is when I divided it in two state machines:

After dividing the state machine in two, I wanted to have the ability to bundle related state machines together and allow their states to change the active state machine based on what happens in the game world. For example if player encounters an enemy in StateExplorationMoving - that state can call ChangeStateMachine(BattleStateMachine);

After having this structure in place, I created a StateMachineController class that holds a list of parent state machines and runs their update methods. 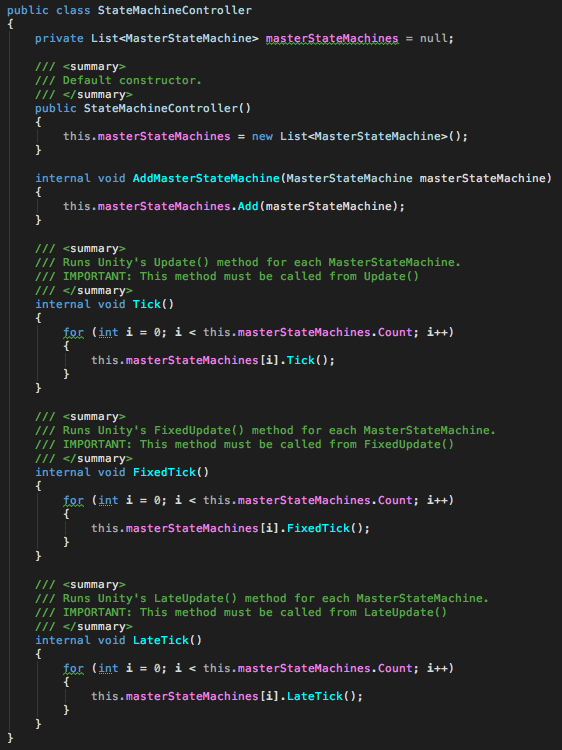 I extracted the code from my prototype and started editing it to be more generic. You are free to use it for your own Unity projects if you want - and feel free to create a pull request if you have ideas to make it better. The project can be found from GitHub.

Forecast Your Weather With Python Script

Jussi Tuomi
How tough is Freelancing?
#discuss #webdev #help #freelance
What are your Favorite Authors, on Which Topics, and Why?
#discuss #writing #watercooler #gratitude
What was your win this week?
#discuss #weeklyretro

Once suspended, jushii will not be able to comment or publish posts until their suspension is removed.

Once unsuspended, jushii will be able to comment and publish posts again.

Once unpublished, all posts by jushii will become hidden and only accessible to themselves.

If jushii is not suspended, they can still re-publish their posts from their dashboard.

Once unpublished, this post will become invisible to the public and only accessible to Jussi Tuomi.

Thanks for keeping DEV Community 👩‍💻👨‍💻 safe. Here is what you can do to flag jushii:

Unflagging jushii will restore default visibility to their posts.