You can find a collection of k6 scripts and build specification for CodeBuild in this tutorial here.

In this tutorial, we will look into how to integrate performance testing in your development process with AWS CodeBuild and k6.

k6 is an open-source load testing tool for testing the performance of APIs, microservices, and websites. Developers use k6 to test a system's performance under a particular load to catch performance regressions or errors.

Documentation for AWS CodeBuild is tightly bound with other AWS services which makes it difficult to understand AWS CodeBuild as a standalone product. To put it simply, AWS has multiple products in it's CI/CD offering which includes:

You can read this blog post to understand how all these services are integrated to form a complete CI/CD pipeline. Fortunately for us, we only need to concern ourselves with AWS CodeBuild and Amazon EventBridge in order to automate k6 load testing. We recommend having a look at the following links:

In order to learn how to write a performance test, we'll work in small steps and improving the existing script as our knowledge develops. The test will be made up of the following:

The test script we will write first will simulate a virtual user accessing a specified website. To ensure we don't overload the system under test, we'll put the virtual user to sleep for one second before continuing.

In this step, we'll look at how we can define parameters. For this example, we'll have 50 virtual users accessing the specified website for the duration of one minute. Due to the sleep we specified earlier, the script will generate 50 interactions per second, resulting in a total of about 2900 iterations.

If you have installed k6 in your local machine, you can run your test locally in your terminal using the command: k6 run test.js.

Next, we need to define our Service Level Objectives, also known as SLOs. This is basically a measurement that specifies the desired performance levels at a given load. With k6, this is done using Thresholds where you can define SLOs as Pass/Fail criteria.

If any of the thresholds you define fail your test, k6 will halt and return a non-zero exit code, communicating to the CI tool that the step has failed. Let's see how we can add a Threshold to our previous script. We'll ensure that the 95th percentile response time remains below 500ms.

Thresholds are powerful features that allow us to define different types of Pass/Fail criteria in the same test run. For example:

Take a look at our Thresholds documentation for additional details on the API and its usage.

Setting up the CodeBuild workflow

In order to automate the build process, we'll need to create a buildspec.yml file with the following configuration:

At the time of writing AWS CodeBuild supports repositories hosted on GitHub, BitBucket, Amazon S3 and AWS CodeCommit. For reference, we'll use GitHub for this tutorial. Once you've prepared a project containing the above files, you'll need to commit and push the changes to your remote repository.

Once your remote repository is ready, you can start working on your AWS Console. Using the Services menu, locate AWS CodeBuild and open the page:

Click the Create project button and populate the form as follows:

Leave all other settings in the default state. Ensure CloudWatch logs is enabled. Click the Create build project button.

The next step is to run the project which you can do using the Start build project. Once it's complete, you should expect the following results: 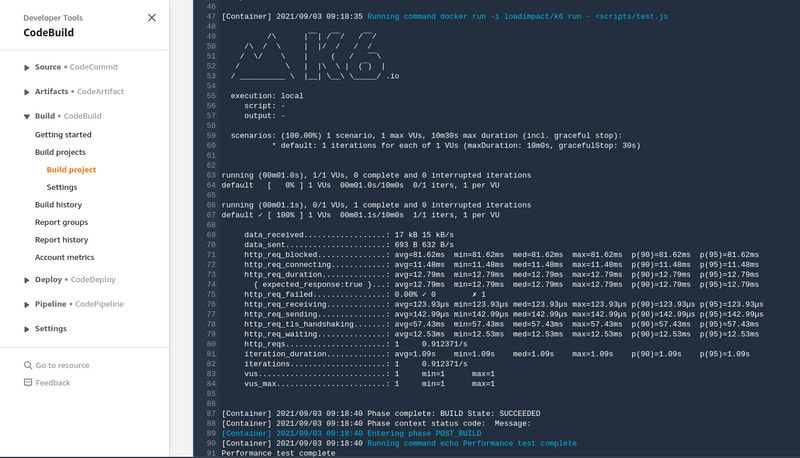 There are two common execution modes to run k6 tests as part of the CI process.

You might want to use cloud tests in these common cases:

If any of those reasons fit your needs, then running k6 cloud tests is the way to go for you.

Before we start with the configuration, it is good to familiarize ourselves with how cloud execution works, and we recommend you to test how to trigger a cloud test from your machine.

Now, we will show how to trigger cloud tests using AWS CodeBuild. If you do not have an account with k6 Cloud already, you should go here and start your free trial. After that, get your account token from the cloud app and save it somewhere temporarily.

Next, let's create a modified version of the testing script and call it cloud-test.js:

The ext property enables passing of the script filename which is required for cloud execution. The next step is to update buildspec.yml as follows:

You'll need to commit and push the new changes to your remote repository. Next, we need to modify the current build and specify the K6_CLOUD_TOKEN as an environment variable:

After making these changes, run the build. In about a minute or so, you should expect the following output: 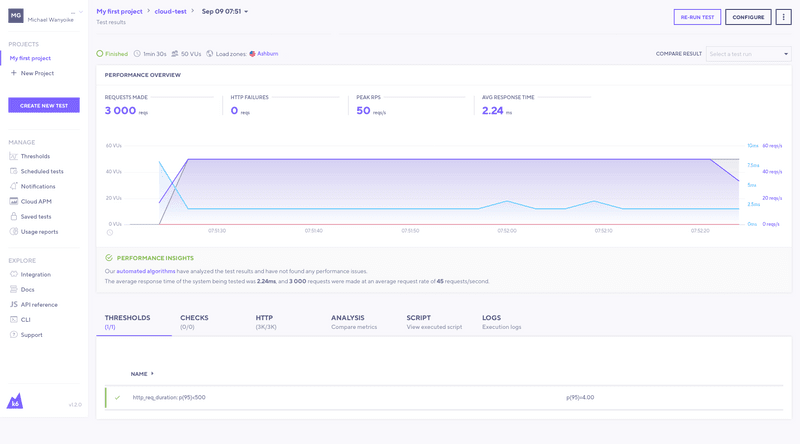 It is highly recommended to perform load testing at a time when most users aren't accessing your system. This is because performance testing often places significant stresses on your infrastructure which may cause user experience issues.

To configure scheduled nightly build that runs at a given time of a given day or night, head over to Amazon EventBridge.

Head over to the Amazon EventBridge console and click the Create rule button. Fill in the form as follows:

For the Project ARN, simply replace the values in italics with values from your account i.e.

Your fully constructed project ARN should look similar to this:

AWS doesn't fully recognize the standard CRON format. Hence you'll need to use the format specified in their cron guide. 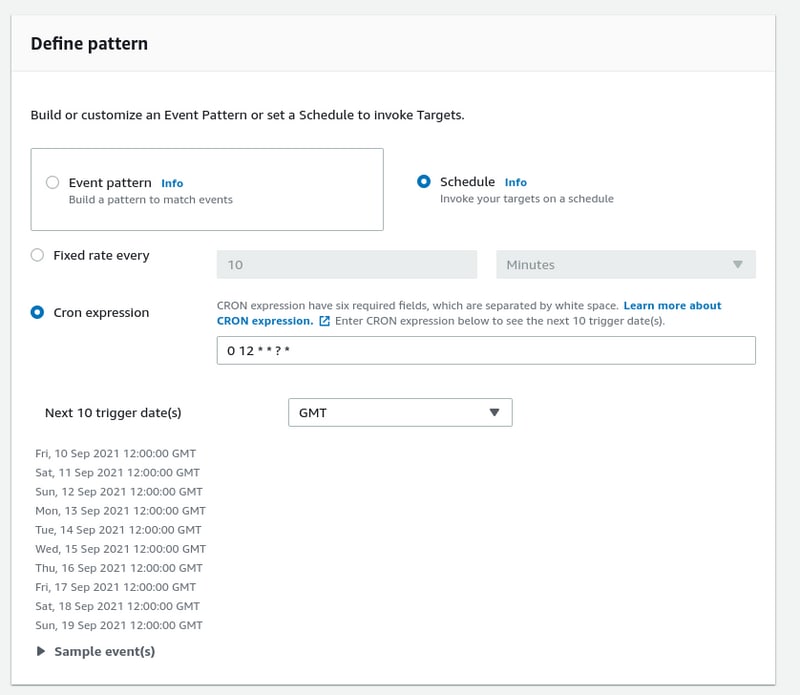 After filling the form, click the 'Create' button to save the changes. The Load-Test-Example CodeBuild project will run at the specified time.

Building your CI/CD pipeline on AWS platform can be overwhelming at first. Hopefully, this guide should help alleviate the pain by showing you exactly what you need you to configure in order to setup an automated load testing pipeline on AWS.

As demonstrated in this article, you can execute an AWS build that runs k6 either locally or on the cloud. Automating performance testing in your CI/CD pipeline will help you identify issues early before they affect your customers.

Once suspended, k6 will not be able to comment or publish posts until their suspension is removed.

Once unsuspended, k6 will be able to comment and publish posts again.

Once unpublished, all posts by k6 will become hidden and only accessible to themselves.

If k6 is not suspended, they can still re-publish their posts from their dashboard.

Once unpublished, this post will become invisible to the public and only accessible to Michael Wanyoike.

Thanks for keeping DEV Community 👩‍💻👨‍💻 safe. Here is what you can do to flag k6:

Unflagging k6 will restore default visibility to their posts.