Originally posted on my blog at kamranicus.com

When migrating from JavaScript to TypeScript, you will often run into scenarios that seem difficult to statically type related to destructuring objects.

This pattern is showcased using the following code snippet, which reflects the semantics of some code we reviewed recently:

This function essentially takes a payload, transforms it, and returns the modified payload object.

Specifically, notice in the function arguments the expressions = {} which in JavaScript will set a default value of {} for the parameter if it is undefined. This is done because on the next 2 lines, we attempt to destructure and pull out some key props of the objects. If payload or queryParams is undefined then the destructuring would blow up and we don't want this code to blow up. That is pretty reasonable!

If we want to migrate this function to TypeScript, it would make sense to add a type annotation for each parameter like this:

We are trying to annotate our types properly by telling TypeScript what types we expect these parameters to be. We've declared our API type ResponsePayload with a results property.

But alas, TypeScript will throw an error immediately:

While this might seem wrong at first on the surface, TypeScript is actually pointing out a code smell in this function.

The reason that TypeScript doesn't allow this is because the ResponsePayload type has a results property that is required (cannot be undefined). We know this because we typed it that way, presumably because the API doesn't return undefined. If it did, we could change results to be optional.

When converting destructuring code to TypeScript, you will be encouraged to consider the code more critically than before, otherwise you will run into type errors.

Here's what I ask in this situation:

These questions are dependent on the specific case but in the majority of cases, you can usually remove the need to destructure by asking these questions.

For example, let's take it step-by-step.

Can the function be simplified to pass a specific primitive value for the parameter?

A quick look will tell us that the answer is No for payload but Yes for queryParams.

Only results in payload is used but payload is also being mutated, so the function needs the object passed, let's set that aside.

For queryParams, only searchTerm is actually referenced, so let's simplify this function to pass only that:

Great! The rest of the code remains the same and we eliminated one unnecessary destructuring.

Approaches to Refactoring for Destructuring

If I need to pass an object, can I refactor the function to avoid it?

Right now the function requires payload to be provided directly. There are two approaches we could now take:

If we intend to keep the logic in the function intact, we need to provide a value for all required properties of ResponsePayload.

We can do this inline within the function which works well for a small list of parameters:.

All fixed; since we provide a default value for results which isn't undefined TypeScript is happy.

We could also choose to provide a default object for more complex situations:

This works just as well but introduces a dangling object that might not add a ton of value. Can we remove the need for providing payload in the first place?

The fact that the function mutates the original incoming object is a smell itself. There are cases where that makes sense but in this case, we are transforming results--we should just return the newly mapped results and push the concern of mutating payload to a higher-level.

Nearly there. We will now receive an error because isSearchPayload was testing the payload itself. We have two options:

We could certainly do option 1 but I like option 2 better. It will end up simplifying the results typing even more because we can know the results are search results! This also makes the function name much more accurate:

There we go; we've totally removed the need for destructuring with this function by simplifying the requirements and avoiding mutation of objects.

Where did the complexity go?

By refactoring the function we pushed two concerns higher in the call stack:

That logic still has to exist somewhere but now it can be lifted higher. There is a principle at work here called the Command-Query Separation principle, which says:

"every method should either be a command that performs an action, or a query that returns data to the caller, but not both. In other words, Asking a question should not change the answer."

Before we refactored this function, it violated this principle because it both returned new results (a query) and had a side effect by mutating the object (a command). Now we've refactored it into a "query" function only.

If we had inspected the previous way this function was called, you would have seen this:

This should raise a yellow flag since it is returning the object again which implies it may be mutating it (in other words, "it smells").

Now that we've refactored the function above, some responsibilities have been pushed higher, which may result in a change like this:

We avoid mutating the payload directly instead opting to merge the new property in. We now have options to extract this logic, refactor it, etc. which you can decide!

If we're able to remove the need to destructure by simplifying functions that is a win but what if we really need to safely destructure and more specifically, in a nested way?

This is slightly more complicated and subsequently harder to type and it should be. One thing I have come to appreciate about TypeScript is that it makes you feel the pain a little more which in turn encourages you to take a step back and question why the code is structured the way it is.

In this example, we can ask the same question we originally asked: Do we really need data or can we be more specific?

Let's say we must keep data as a parameter. If meta and all the field* properties can truly be undefined and are marked as so, this code will work.

As soon as one of them is non-optional, TypeScript will throw an error since we haven't provided defaults.

For example, let's say data is typed as:

meta is not optional, it must be provided so the code above will throw an error as no default meta value is provided and neither are the field* defaults. Yikes!

The best approach is to do a refactoring like we did above to simplify the parameters, if possible.

The next best thing is to remove the default:

This matches how we've described the types -- that no property can be undefined so there's no reason to use a default parameter anymore. If this matches what you expect, there's nothing additional to do.

What if in practice, things could potentially be undefined but we still want to ensure the types remain "pure"?

Then we should push the "guarding" of potentially undefined values higher up the stack:

In general, you should guard as close to the source as possible. This keeps downstream functions simpler and with TypeScript, you can ensure they get passed values that don't need defaults to be provided.

Let's assume that meta fields can be partially available, we can simplify and statically type the function like this:

Now we've explicitly declared that meta can be partially defined. This does two things:

Static types are documentation and now we've called out to expect that meta can have partial fields. It also allows us to safely set the default object to {} to avoid errors while destructuring.

There is a hammer we can use as a last resort. If we can't effectively refactor out destructuring or if we really need to force this pattern to avoid changing code, we can use type assertions:

This will force TS to treat the empty object as the types we want--but this introduces potential for bugs as now we are opting out of the type safety. We are putting the responsibility of checking for undefined on the developer writing the function vs. the TypeScript compiler.

If you do this with ESLint rules enabled, you'll be greeted with an error:

Again this is because it's best to avoid this in the first place. In order to get this to compile, you'll need to disable the error:

At least now, you can later search for these disabled errors as an indication to revisit and refactor later.

When migrating to TypeScript, you will run into a lot of issues like this that on the surface feel like you're battling the type system but what I hoped to get across is that TypeScript is forcing you to think more explicitly about how your code is structured and what your intent is. It will force you to look beyond the scope of a single function and think more holistically about usage and context.

When you find yourself trying to disable rules or workaround TypeScript errors through type assertions, you need to take a step back and ask:

Is this the best way to structure this code or is TypeScript hinting that I may need to refactor it?

This type of mindset is a shift in thinking when working with TypeScript, especially when you've come from JavaScript. It may be painful at first but ultimately it will lead to better, hopefully simpler code.

If you're interested in furthering your understanding of principles like Command-Query Separation and refactoring code, I highly recommend the Encapsulation and SOLID course by Mark Seeman from Pluralsight.

You can also check out my collection of React and TypeScript content! 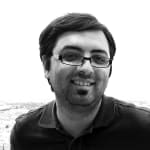 How to Get Started Using React with Typescript

Once suspended, kamranayub will not be able to comment or publish posts until their suspension is removed.

Once unsuspended, kamranayub will be able to comment and publish posts again.

Once unpublished, all posts by kamranayub will become hidden and only accessible to themselves.

If kamranayub is not suspended, they can still re-publish their posts from their dashboard.

Once unpublished, this post will become invisible to the public and only accessible to Kamran Ayub.

Thanks for keeping DEV Community safe. Here is what you can do to flag kamranayub:

Unflagging kamranayub will restore default visibility to their posts.