We made some considerable improvements to the tech stack at The Graide Network during my years at the company, but one of the things I’m most proud of is our automated testing system. In this post, I’ll outline our strategy for testing microservices using layers of unit, integration, acceptance, and end-to-end tests.

We used tests to deploy our microservices faster and with very few defects. Along the way, I’ll offer some other resources that we found helpful as we designed a robust testing system for our microservices.

The Importance of Software Testing

First, why do we care about testing our software anyway? 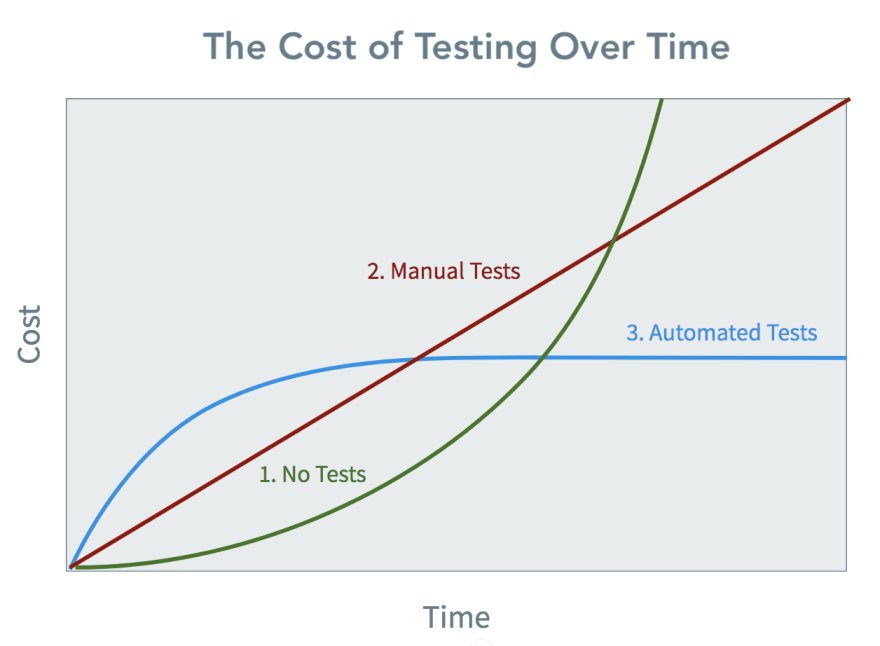 While testing adds time to the software development life cycle, it pays dividends in the long run. I’m not going to harp on this topic here, but in my experience, automated tests:

When using microservices, these factors are all important, but as you’ll see, the distributed nature of this pattern adds an extra challenge.

Our Architecture and Testing Strategy

When I joined The Graide Network in the fall of 2016, there were no tests; no way to tell if something was wrong on the site; no way to catch bugs before they went into production. Needless to say, we couldn’t ship much code in the first few weeks.

So, we started to invest in a test suite by writing some Behat tests in Mink. Our application wasn’t written to be tested, so unit tests were initially next to impossible, but behavior-driven tests gave us at least a little confidence to start refactoring to microservices.

Over the next few months, we’ve built out six microservices on the backend, an Angular frontend application, and made some major improvements to slim down the legacy application. At a high level, our architecture looks something like this: 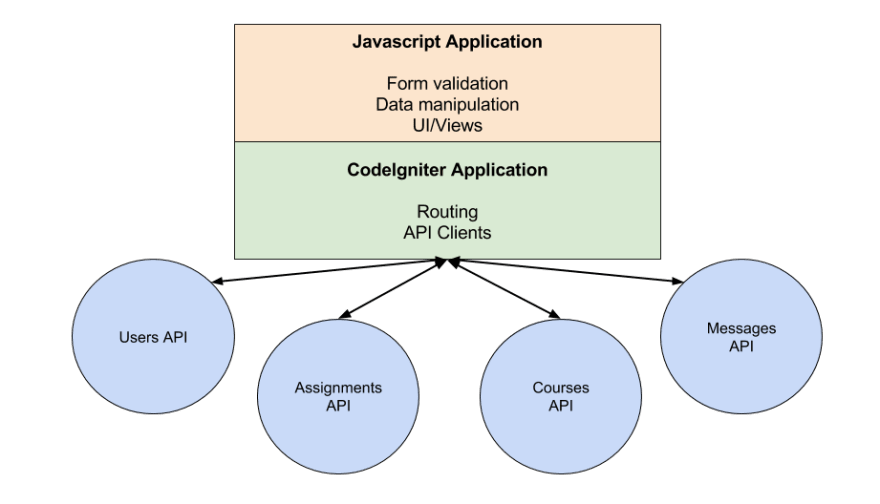 One of our biggest challenges in managing a microservice architecture is testing.

This seems to be a common problem for architects who choose microservices; we’re far from the first company to encounter and solve this problem. One of the most helpful resources I’ve found is Martin Fowler’s Testing Strategies in a Microservice Architecture, which I would strongly recommend.

I’d also recommend picking up Microservices in Action by Morgan Bruce and Paulo Pareira. While they don’t talk about testing specifically much, they do offer some tips for monitoring, tracing, and continuous delivery of your microservices.

Finally, take a look at Susan Fowler’s Production-Ready Microservices. I liked her perspective based on Uber’s massive microservice architecture as they deal with a level of scale and fault tolerance I can only imagine.

While all of the resources above offer great general advice, I will focus on the details of our microservices testing strategy in the remainder of this post. I hope this gives you a better handle on what this might look like in practice.

Each of our microservices and each frontend application lives in its own repository and on its own server, so everything is highly decoupled. The great thing about this is that we can switch components out and upgrade individual APIs without taking the whole system down. The challenge with this architecture is figuring out how to test each service without standing up all the services it depends on.

Our testing strategy is broken down into several layers within each application and integration layers around multiple components of the application. These layers are based on the well-known testing pyramid concept. 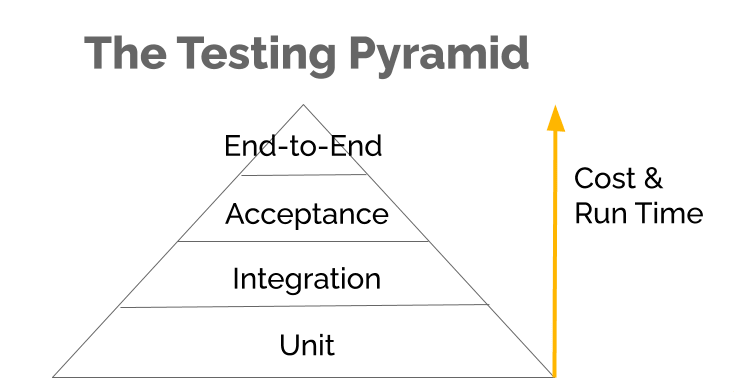 Each API (or microservice) is written in Laravel, and communicates with internal APIs, external APIs, and a database over an HTTP or TCP connection. These are pretty typical PHP applications, but they return JSON responses instead of serving up user views.

As for testing, we use a mix of unit, integration, and acceptance tests as seen here: 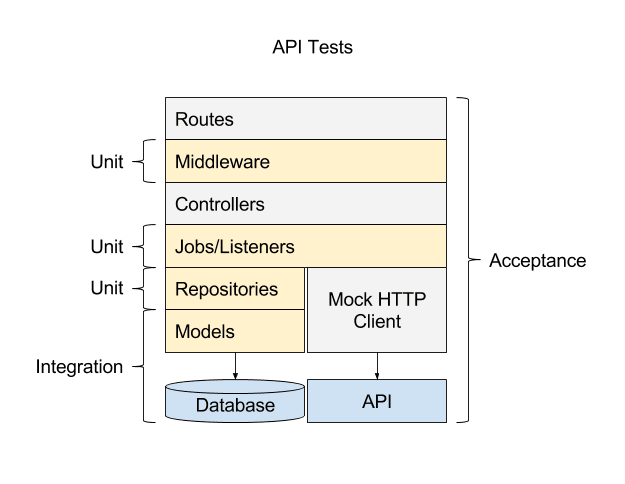 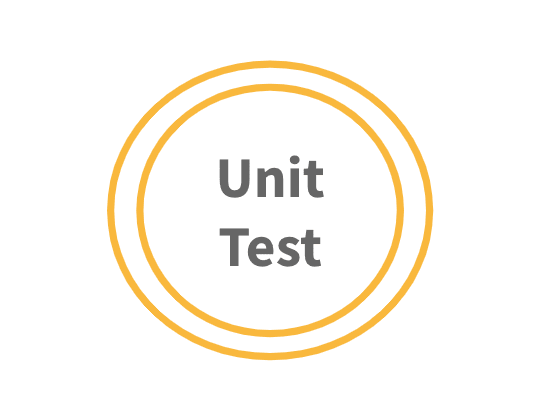 Since we rely on a well-tested framework, we choose not to test some components which are already adequately tested in Laravel. While a lot of developers put application logic in their controllers, we keep our controllers slim and instead pass off most of the business logic to Jobs, Repositories, and Models, but pretty much every custom layer in the application is unit tested. 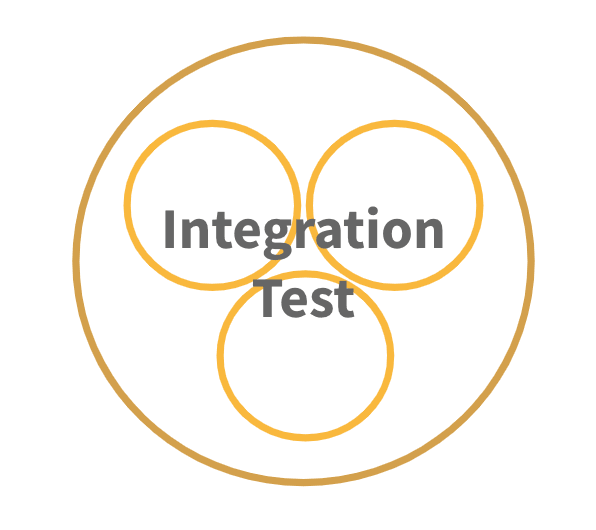 Some pieces of the application lend themselves especially well to integration tests. For example, the Eloquent Models we write are so tightly bound to the database that it’s convenient - and more productive - to integration test them with a real database connection rather than try to mock it.

We keep our models slim, so our integration tests just verify that they retrieve data from the data as we would expect. For example, here’s a typical model in our Assignments API:

Our integration tests for this model just need to check two things:

We try to test the unhappy cases as well (eg: if we query without the with('assignment') argument, it should not retrieve the parent assignment). 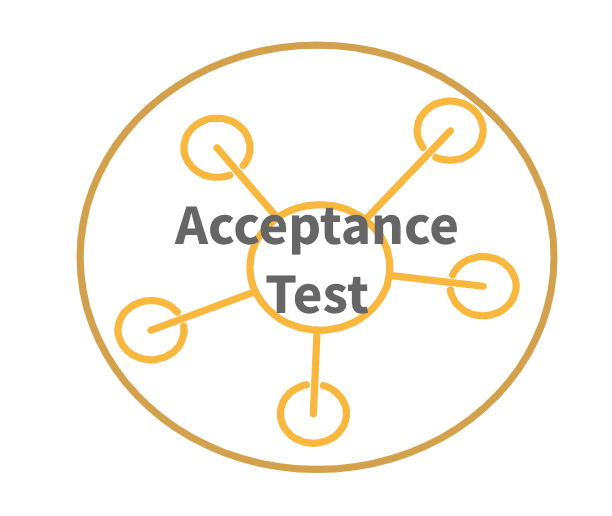 In order to run an acceptance test on an API, we test each microservice and its database connection without testing the other APIs in our system. We do this by mocking the HTTP Client at runtime and binding the mocked version of the client to Laravel’s application service provider. When we write each acceptance test, we just need to let the test know which mocked API calls will be made and what they will return. This effectively decouples our microservices for testing purposes.

We don’t test our internal API clients within each microservice because they are used in multiple places. So, we released a Composer Package for our microservice HTTP clients and wrote unit and integration tests there.

The unit tests within our HTTP client package are pretty simple since our internal HTTP clients are just wrappers around Guzzle. They ensure that parameters are passed in, transformed, and sent Guzzle and that the expected response is passed back to the caller.

Our HTTP client integration tests actually make calls to the microservices. These are still a work in progress, but the idea here is that these integration tests (in addition to each API’s internal acceptance tests) will help ensure that the APIs are responding as we expect.

We have two frontend systems: our legacy application, which sits in front of all the microservices, and our Angular frontend app, which will eventually replace the legacy application. Since we’re moving away from the legacy frontend, I’ll omit it, although we do currently unit and end-to-end test that application as well.

As for the Angular frontend application, the testing layers look like this: 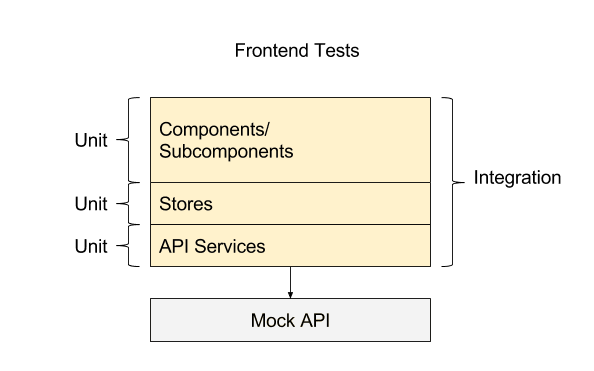 Just like with our backend code, we unit test each sub-layer within the Angular application by mocking any dependencies (Angular’s dependency injection makes this easy) and using Angular CLI to wrap the Karma tests. As with any testable code, the key is to keep components lean, but I’m admittedly still learning a lot about the best way to structure an Angular app.

We don’t run end-to-end tests directly within our Angular app, but we do run integration tests with mocked API responses. This ensures that the entire Angular application is transforming and presenting data as we would expect, but it allows us to avoid requiring all of our backend microservices to be running just to run the test suite. 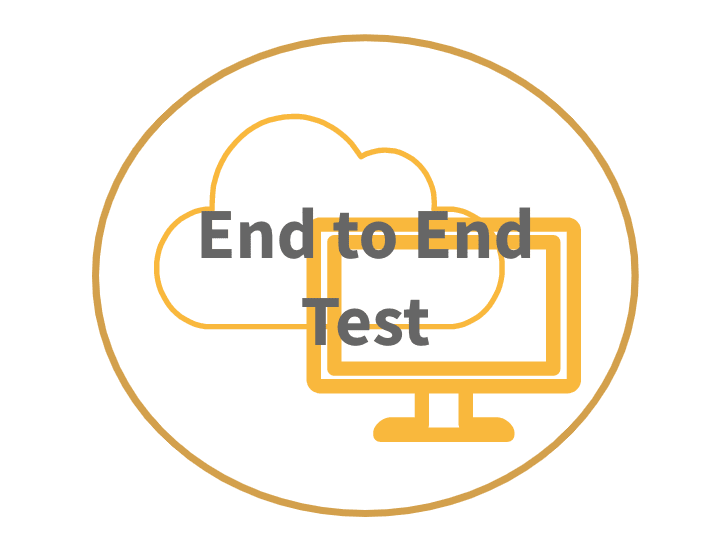 While some developers eschew comprehensive end-to-end test suites, I do find that they hold some value, especially in preventing regression when your company is small and does not have dedicated testing resources (eg: our team at the Graide Network). But, I also realize that end-to-end tests are probably the least helpful in a microservice architecture as they don’t tell you on their own where something went wrong, just that it did.

So rather than build an end-to-end testing suite in our code (which application would it even “live” in?), we decided to use a third-party service called Ghost Inspector, which automatically runs our end-to-end test suite twice per day on our dev server. Ghost inspector lets you record tests by simply clicking around your web app, so an intern or even a product manager can create tests in a pinch. Once recorded, Ghost will run the tests automatically at a specific time (or when triggered by your CI server) and report back to you if something goes wrong.

Our dev environment resets itself between the Ghost Inspector runs so that next time the end-to-end suite goes, the application will have the data it expects. 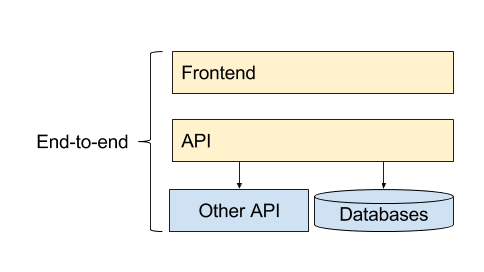 Unlike the other testing layers we use, the end-to-end tests actually run the whole network of services. There’s no mocking of clients or API calls, so the kinds of tests we can do are somewhat limited. For example, it’s not possible to determine if an email or Slack notification was sent when testing with Ghost Inspector. But, that’s why we have multiple layers of tests.

On its own, no single testing layer is a good indicator of our application’s health, but in concert, these testing layers help us ensure that our code is working every time we deploy it.

Mountebank: Another Approach to Testing Microservices

Another tool that has come out since we devised the above testing strategy is Mountebank. Mountebank is an open-source service virtualization framework that essentially mocks microservices across HTTP. This allows you to run tests on a single microservice as if all its supporting services were really there.

There’s a well-received book on using Montebank called, aptly enough, Testing Microservices with Mountebank. Published in 2019, this book starts with the theory behind microservice testing and works its way into Montebank-specific tactics to stand up and impersonate your distributed systems.

Note: This post was originally published in 2017, but was updated with new information in November 2020.

Why don't you start writing tests?

LifeCycle Of A Testing Bug

Once unpublished, this post will become invisible to the public and only accessible to Karl L. Hughes.

Thanks for keeping DEV Community 👩‍💻👨‍💻 safe. Here is what you can do to flag karllhughes:

Unflagging karllhughes will restore default visibility to their posts.