If you’ve made an ice cream sundae before, then you can understand CSS positioning.

Your divs are zooming around the screen like Roman candles.

They’re diving deep into their container, then coming back up to the surface like a whale.

They’re pushing the other elements out of the way, then leaving the container entirely like an impatient businessman.

And somehow, this happens in a new and exciting way every time you change that one nasty line of CSS: the position property.

Every single person who has learned CSS has been there. CSS positioning seems to be nonsensical until hours of trial and error finally give you a vague understanding.

This post will end the confusion, once and for all.The position property doesn’t seem to have an obvious relation to any real-world concept… until you consider the humble ice cream sundae.

And, for the sake of clarity, an ice cream sundae will consist of 4 major components:

The Ice Cream Sundae as HTML

If you had to explain the structure of an ice cream sundae with HTML, it would probably look like this.

Or, in picture form: 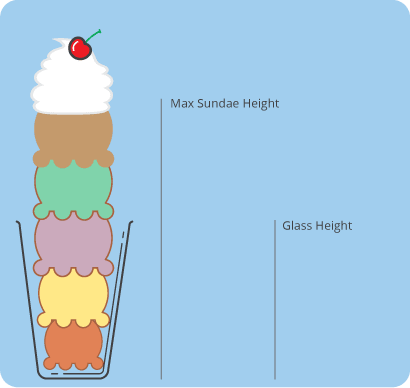 Before we dive into CSS, we can make a couple observations:

Position Relative/Static: The Glass and Scoops

As shown in the first picture, our leaning tower of ice cream can only hold 5 scoops before toppling over. Let’s say that these 5 scoops have a total height of 500 pixels, and each scoop sits directly on top of one another. Our fullSundae div, in that case, would have a height of 500px to indicate that it
can only handle those 5 scoops, and no more. This is an example of the default position, **static**.We use this to show that the height is unrelated to any container div.

The simple thing to do next would be to just give each iceCreamScoop a height of 100px, which would match the height of the fullSundae div. That would be no fun, because the glass div would be 300px by default. Let’s look at it another way.

You can go even further. If you set each iceCreamScoop within the glass div to position relative, each scoop will calculate its height based on the height of the glass div. The glass can fit three scoops, so each scoop should have a height of 33.3%. Here is all of that in code.

Position fixed should be the easiest one. A position fixed element will be stuck in place no matter how far the body extends. In ice cream terms, this is the whipped cream on top. No matter how many ice cream scoops that you try and stack, the whipped cream will still be on top, with the exact same relationship to the scoops. It is positioned relative to the body, not to the containing div. 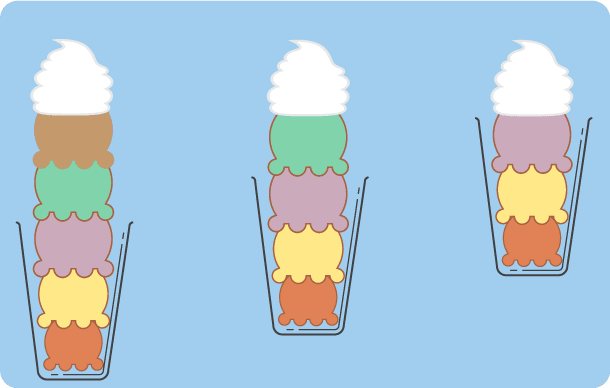 The whipped cream is independent of the series of ice cream scoops. The amount of whipped cream does not affect the maximum number of scoops that you can have in the full sundae. It stays in a consistent spot on the page.

You commonly see position fixed in headers and footers. These are the elements that stick in position,even when you scroll the page or div.

There’s a reason I saved Position Absolute for last: it can lead to unmaintainable code if you use it too frequently. You have been warned. But, it works perfectly for the cherries in this example.

You can put cherries almost anywhere in this ice cream sundae. You can put a bunch on top, and it will not topple over. You can wedge them in the glass itself, and you will still be able to fit the same amount of ice cream. They do not obey the same rules as the position static and position relative elements.
Furthermore, you can remove them without disturbing any other elements.

Check out this cherry-filled sundae. There are cherries added in a bunch of places, and they do not disturb the flow of the other elements. But, keep in mind that you cannot stack the cherries like you stack ice cream scoops. Cherries do not stack. You must place each explicitly.