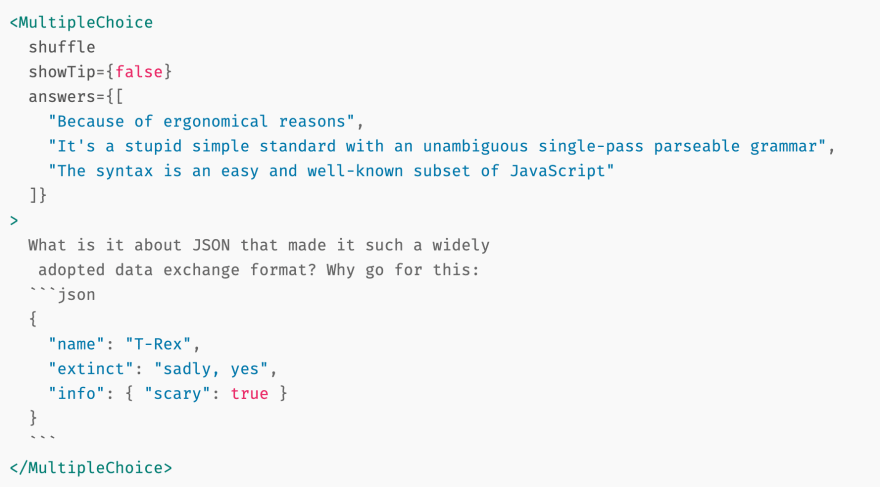 But that's just JSX!—you might say. And you're right, it is indeed JSX (spec / React docs), which I didn't invent. Rather, I decided to specifically subset the JSX syntax—which is itself an extension of the JavaScript expression—to its sensible and simple data-structural part, in a manner akin to what JSON is to the JavaScript expression. In a diagram:

The arrows signify syntax extensions, or their reverse: syntax subsets.

Let's take a step back for a moment, and I'll lead you to the same "invention" of Literal JSX as I had.

JSX was invented alongside, and popularized in the context of Facebook's React, the library that prioritized declarative components as the main building block for building comple UIs (and the rest is history). The main technological invention that fuelled this component-based approach was the idea of Virtual DOM as a functional and reactive API to wrap the stateful DOM API. But JSX doesn't really have anything to do with the latter. In order to write components declaratively using virtual DOM, we could have kept to just writing javascript that might look like this (and sometimes we still do):

Thesis: JSX is about ergonomics and intent

I can imagine two reasons we prefer the former over the latter:

Se let me annotate the diagram above with these insights:

Thesis: JSON was an important invention as a standard

By subsetting the JavaScript syntax to the bare minimum of data structures (and imposing some formatting contraints), Douglas Crockford created a stupid simple, obvious data exchange format. You could say it "won" the battle with XML as a lightweight data exchange format for the web. So what does JSON have that made it popular?

Final thesis: Literal JSX can be a sensible standard for exchanging data with nominal UI-structure

It's a rage to author content in Markdown (and other related lightweight markup formats). Due to the principle of "less structure makes for easier interopability" (also related to the idea of "garbage in, garbage out"), and together with its visual simplicity, Markdown seems a near-perfect compromise between content authoring and a markup format. However, frequently we want to break out of the simplicity of Markdown, to add domain-specific extra's.

For example, dev.to itself has a whole slew of "additional components" you can place in your article (with Liguid tags), such as integrations with Codesandbox, Glitch, GitHub, and some dev.to specific addons, etc. Many alternatives exist out there to add such additional components to Markdown text, but they're all based on what I call "grammar hacks": just a cleverly chosen grammatical "escaping identifier" such as {% ... %} or [[ ... ]] or $$ ... $$ or %% ... or ..., but no rigorous additional grammatical specification, rendering it too specific and inflexible.

At Codaisseur (where I teach full-stack dev), we too author our course materials in Markdown, version control them, etc. We have small exercises strewn through our course materials, as well as some interactive code editing integrations. But we're aiming for a more general solution of adding more types of interactivity and exercises to our contents, without sacrificing the ease and flexibility of Markdown authoring, keeping our contents version controlled, etc. In short, Literal JSX gives us the possibility to write Markdown-based materials like the following:

But MDX already exists, why do we need Literal JSX for this?—you might ask. And you're right, this is almost exactly the problem MDX is solving. But with one crucial difference: MDX is an implementation, where Literal JSX hopes to be a standard. Concretely though, this means that it is infeasible to render our contents in MDX, because it would either require having the bundler (say Webpack or Parcel) read all of our course materials (a lot) at build-time, or else we'd have to have the MDX runtime (which includes a full-fledged JavaScript expression parser and transpiler) in the application. And it wouldn't make sense either: because content is data, not code.

Because this would make more flexible, the traditional split between (on the one hand) the application, which needs to understand how to visually structure data; and (on the other hand) the content, which then needs to follow the structure defined beforehand by what is presentable in the application.

So there we have it then. Literal JSX, to my mind, is a general, but more importantly, obvious solution to the problem of exchanging UI content. JSX already is the most widely adopted and recognizable face for authoring "UI components". All we did is to strip it from the full JavaScript language spec, and subset it to just include well-founded data structures, and with an easy single-pass parseable grammar.

In lovely railroad grammar diagrams, this is what it looks like. First, the simple grammar for a trimmed-down JSON-like version of JSX:

And, then, we extend the syntax of JSON to include the "Element" non-terminal:

Once suspended, kelleyvanevert will not be able to comment or publish posts until their suspension is removed.

Once unsuspended, kelleyvanevert will be able to comment and publish posts again.

Once unpublished, all posts by kelleyvanevert will become hidden and only accessible to themselves.

If kelleyvanevert is not suspended, they can still re-publish their posts from their dashboard.

Once unpublished, this post will become invisible to the public and only accessible to Kelley van Evert.

Thanks for keeping DEV Community 👩‍💻👨‍💻 safe. Here is what you can do to flag kelleyvanevert:

Unflagging kelleyvanevert will restore default visibility to their posts.