I had an opportunity to work on React/Redux application with DevOps. I am C# developer for long time so I am familiar with DevOps process, but it was my first time to play with React/Redux, so I decided to leave note here what I learnt for last couple of weeks.

My current plan is:

In this article, I write a simple React/Redux application which I use for DevOps later.

React is a JavaScript library for building user interfaces which Facebook developed. I was a bit confused at first time as there is ReactJS which I can build node based web application and React Native which I can build mobile native application. In this series, I focus on ReactJS.

Create React App is a useful utility to create react application which brings several advantages compare to build from scratch, for especially newbie like me. I found the tool in the official React: Create a New React App page, so I trust this one :)

Redux is a predictable state container for JavaScript application which many people seems to use it. Even though this is not mandatory for React application, it seems to be quite popular choice when it comes to state management. My friend told me there are other technologies to manage state, such as React Context, but as my project uses Redux, I stick with it this time.

The create-react-app is the easiest way to build new app. This is my environment.

1. Run the following command to scaffold template. This takes 3-5 minutes. I used TypeScript template as I love strong type language.

2. Run the application from terminal in VSCode.

That's it to create new application and I am ready to develop my app.

There are handful of files generated, but I mainly work with following files.

Before start writing code, I just update the App.tsx to use class component rather than function component.

1. Replace the code in App.tsx.

3. Click [Increment] button and confirm you can live debug the application. 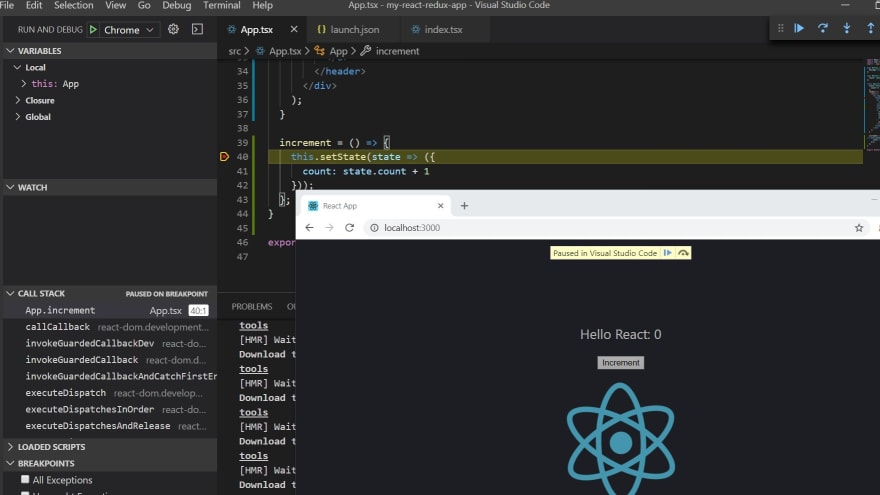 App.test.tsx contains test code from the template. There are many libraries to test react application. I start writing test by using following libraries.

I will add addional libraries later depends on my needs.

1. First test is to check if "Hello React: 0" is rendered as expected. I used getByText to query the DOM object. You can see more query here. Then I use toBeInTheDocument to assert the existence of the element, which comes from @testing-library/jest-dom. There are so many other matches for assertion.

2. Run npm test in console to see the test result. The test keeps running and auto update the result, so let it run for now.

3. The second test is to check if clicking increment button will update count state. There are several ways to test this but I take easy route this time. First, import fireEvent and waitForElement in addition to render from @testing-library/react.

4. Add second test. This is an async test as I use waitForElement function. See here for async test detail.

Think about what to test

I usually don't test the framework itself. Even though I tested increment function above, it's not pure function test, but I observe the updated UI, which is caused by setState.

There are two ways I can test in different way.

I can use enzyme to write these test but this time, I stick with what I got at the moment.

I have an application as a starting point now. In the next article, I will add redux to my app.

Building a Video Player in React

Creating data specifically for each user in React / Node.js

How to Create a QR-Code with React