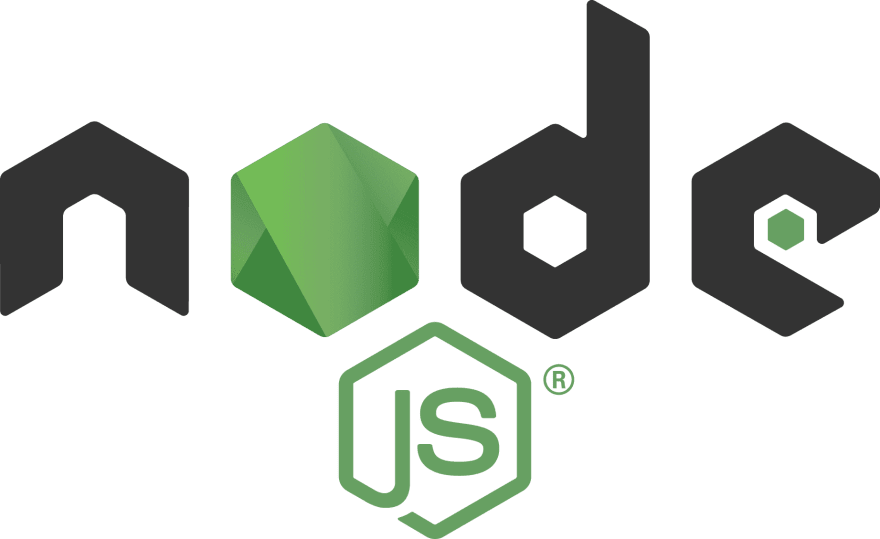 Driven by a recent need to create a local API server to provide me some data-serving end points to a React app, I ran into a few huge walls.

Although there are a lot of articles out there detailing how to create a Node API server locally, some don't cover enough ground (especially from examples of how to use) or are overly complex. What's more, I wanted to serve and edit real data from physical JSON files as a simple filestore database – this would save a lot of faff involving MongoDB or SQL Lite; both great, but overkill for this job.

For crying out loud, shouldn't it be easy to just make a Node API server that saves data to JSON files?!

After what felt like a decade of rummaging through complex documentation and hundreds of StackOverflow answers, I found a brilliant article by Nic Raboy from as long ago as 2015! I think the article misses out a few of the necessary 'real world' end points such as POST that actually interact with a real datastore - in this case, JSON files.

But enough preamble, let's do this thing! Strap in, it's gonna be a long one!!

First things first, you'll need to make sure you have Node.js installed on your machine and preferably an up to date version of NPM.

OK? Good. So, let's create a new folder and navigate into it:

Drop into the folder and run NPM's init script to set up the project with some default files, such as package.json.

Now, we need to install a few things to get going, namely:

Add a couple of folders and files so that your project structure looks something like this:

Open up your package.json file and check that the main entry is set to our server.js file (our main entry point) as well as adding a 'start' script that will launch our Nodemon reloading magic.

Setup's almost done, the last thing is to make sure that we've installed the packages and their dependencies so they're ready to rock. Run the following command:

Bosh - setup's all done and we're ready to start building the server. 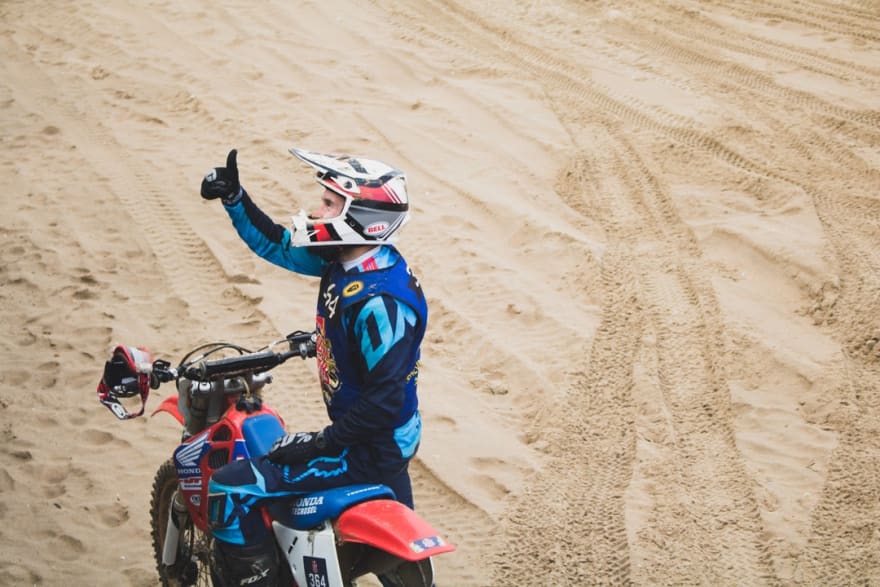 Our first file, an entry point of sorts, will be server.js. We'll build up the main body of the API-serving logic here. We'll deal with our routes and route handling later on.

Open up server.js and add in the following code:

There's a lot going on in there for a relatively small file. To unpack it a little, the top portion of the file essentially loads in our express and body-parser modules before creating instances of them and configuring some settings.

This achieves a couple of things:

Now, we can't quite run our server. Since there's nothing defined in our routing file, it's very likely you'll get a TypeError: require(...) is not a function error. Not very helpful, but all will be resolved once we add some routes.

So far, so good, but what good is an API server with no routes?! None, that's what. Let's remedy that and build out some route handling!

Open up /routes/routes.js and enter the empty module code as follows:

Save the file and let's give this puppy a whirl. Enter this command in your terminal:

You should see a glorious 'listening on port 3001' message. Splendid :)

Now, let's get some more meaningful API-age going by adding our first route.

I should point out that at this stage we're going to be adding complete dummy (if not real-world-ish) data and example routes. Feel free to add anything you like as we go along or make the data and routes more relevant to you and your needs.

First, we need to add in some JSON data. Navigate to the /data folder and create a new users.json file. Fill it with something along these lines:

Next, create a new file under /routes called users.js and fill it with the following:

Hurrah, our very first route is almost ready. Whilst not much to look at, notice that we're including our users.json data file path and then defining our first route /users which uses the GET request type. Now, when we run our server and run a GET request against the users path, we'll be served a list of our users in JSON format.

A couple of other points to mention here:

Hook up our first route to the main route handler

Although complete, our first route won't do anything unless the main routing file, routes.js knows about it. So, open up the file and add the following to complete the wiring up:

So, we've setup our project, created a simple Node API server, added some data in JSON files to be served by the API, and created a route handler to serve API requests.

Let's test our hard work out. Run the same command as before to start the server:

Once it's loading, you can visit http://localhost:3001/users in a browser, where you should be greeted by a list of users as defined in the JSON file. 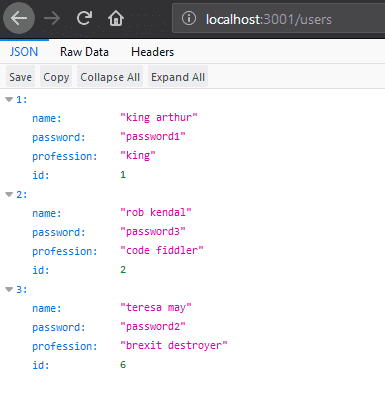 JSON results from our GET request at /users

I checked this in FireFox, but it's worth downloading a dedicated API testing app for jobs like this. I'd recommend Postman (I use it myself locally and in development), but there are loads out there. It'll become more important later down the line when we need to pass data through with the request for POST or PUT requests.

You can download Postman from their website for just about any environment and it's free for individual use.

Here's what our GET request looks like using Postman:

4a. Skip to the complete example

GET-ting results and listing them is fine, but in the real-world we usually need to complete the rest of the RESTful CRUD cycle, namely creating (POST), updating (PUT), and deleting (DELETE).

Before we get to the more complex examples, you can skip ahead and download the complete Node API server from the GitHub repository if you'd prefer.

5. Taking it further, completing the CRUD

Let's keep going while we're on a roll. In this section, we'll pad out our limited API server with some creating, updating and deleting methods to alter the JSON files stored on disk.

Refactoring what we've got

As a huge fan of the continuous refactoring technique, I'm always looking to improve code as I go. Looking at the file users.js now, we're going to start repeating a lot of code with the fs.readFile() and fs.writeFile() methods. Let's refactor them up to the top of the users.js file now:

With the exception of the Read part of CRUD, all the other operations are going to involve reading data from a JSON file, altering it (adding, editing, removing) and then writing it back to the file.

This is going to involve virtually the same process for the reading and the writing parts, only the alteration part (the bit in the middle) is going to differ between requests.

So it makes sense to pull out the future redundant reading and writing to file operations and put them into separate abstract helper methods. That's what we've done.

Our new, refactored read/write methods look very similar. Here's what they do:

You can read more about the various file system methods on the Node website.

We'll start with the create part of the CRUD, creating a new user. Add in the following code, just below our read method:

It's quite a simple operation here. Note that we've changed the app function call to app.post() as this is a POST request to the API server. The route remains as /users but will hit this method when the request type is a POST.

First, we call our new read method and pass a callback function in. When the file is read and we get a JSON object, data back, we need to create a new user object. For this, we'll grab the number of objects in the file at the moment using Object.keys(data) and increment it by one.

Next, we add the new user, JSON.parse(req.body.data) to the users object using the new user ID we created – notice that we need to wrap it in JSON.parse to coerce the incoming request body into a format we can read and add to our current data.

Finally, we call our refactored writeFile() method, stringifying our new user data and passing it in. Once the file has been sucessfully written, we tell the response object to go back to the API caller with this line, res.status(200).send('new user added') – we also add a nice message to the caller to let them know it succeeded.

Note, in a more realistic setting, it's likely that you would return the updated user list, but for now, keeping things simple is easier so a little 'new user added' message is preferable.

The update and delete methods should look very familiar, as they are resemble the create method.

The main differences here are the route we call and grabbing the parameters out of the request.

Note, we're not adding the extra complexity of validating the incoming data here. This is a necessary part of production API development , but for simplicities sake, we're trusting you to send the right data into the API request!

To round things off, here is our delete function:

Almost identical the the update route, the main difference here is that we use the JavaScript delete keyword to remove the matching user from the users list before saving back to the file.

So there you go. A fully functional API server for whatever you'd like to use it for. You can visit the GitHub repository for the starter API server and download, checkout or fork to your heart's content.

If there's anything I've missed or that you'd like to know more about, let me know in the comments or shoot me an email to me[at]robkendal.co.uk.

Start your SaaS for $0/month 🚀