This article is Lesson 12 of Andrew's book, Learn ClojureScript

ClojureScript is a functional programming language. The functional programming paradigm gives us superpowers, but - love it or hate it - it also makes certain demands on the way that we write code. We have already discussed some of the implications of functional code (immutable data, minimizing side effects, etc.), but up to this point we have not studied what a functions are - much less how to use them idiomatically. In this lesson, we define what functions are in ClojureScript, and we will study how to define and use them. Finally, we'll look at some best practices for when to break code into separate functions and how to use a special class of function that is encountered often in ClojureScript - the recursive function.

Think about the programs that you have written in the past. Maybe you primarily write enterprise software. Maybe you write games. Maybe you're a designer who creates amazing experiences on the web. There are so many different types of programs out there, but we can boil them all down to one common idea: a program is something that takes some sort of input as data and produces some sort of output. Enterprise software usually takes forms and generates database rows, or it takes database rows and generates some sort of user interface. Games take mouse movements, key presses, and data about a virtual environment and generate descriptions of pixels and sound waves. Interactive web pages also take user input and generate markup and styles. 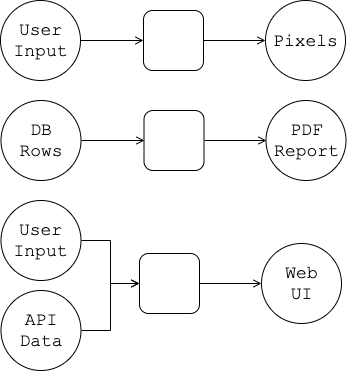 In each of these cases, a program transforms one or more pieces of data into some other piece of data. Functions are the building blocks that describe these data transformations. Functions can be composed out of other functions to build more useful, higher-level transformations.

We can think about functional programming as a description of data in motion. Unlike imperative code that makes us think about algorithms in terms of statements that assign and mutate data, we can think of our code as a description of how data flows through our program. Functions are the key to writing such declarative programs. Each function has zero or more input values (argument), and they always return some output value1. 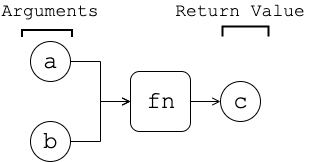 A direct translation2 of this code to ClojureScript is pleasantly straightforward:

Since JavaScript was designed with a lot of the features of Scheme - another Lisp - in mind, it should come as no surprise that functions work similarly across both languages. The primary differences are syntactical rather than semantic. So with that, let's take a look at the syntax for defining functions.

Functions may be defined with the fn special form. In its most basic version fn takes a vector of parameters and one or more expressions to evaluate. When the function is called, the arguments that it is called with will be bound to the names of the parameters, and the body of the function will be evaluated. The function will evaluate to the the value of the last expression in its body. As an example, let's take a function that checks whether one sequence contains every element in a second sequence:

This example illustrates the basic form of fn where there is a parameter vector and a body consisting of 2 expressions. Note that the first expression logs some debug information and does not evaluate to any meaningful value. The function itself takes on the value of the final expression where xs and test-elems are substituted with the actual values that the function is called with:

You may have noticed that while we have declared a useful function, we do not have any way to call it because it lacks a name. This is where defn comes in - it is a shorthand for declaring a function and binding it to a var at the same time:

As we can see, defn is a useful shorthand when we want to create a named function.

In order to keep our programs clean, we usually group related functions together into a namespace. When we bind a function to a var using either def or defn, the function becomes public and can be required from any other namespace. In ClojureScript, vars are exported by default unless explicitly made private3. Unlike object-oriented programming, which seeks to hide all but the highest-level implementation, Clojure is about visibility and composing small functions - often from different namespaces. We will look at namespaces and visibility in much greater detail in Lesson 25.

The basic form of defn that we just learned is by far the most common, but there are a couple of extra pieces of syntax that may be used.

First, a function can be declared with multiple arities - that is, its behaviour can vary depending on the number or arguments given. To declare multiple arities, each parameter list and function body is enclosed in a separate list following the function name.

Multiple arity functions are often used to supply default parameters. Consider the following function that can add an item to a shopping cart. The 3-ary version lets a quantity be specified along with the product-id, and the 2-ary version calls this 3-ary version with a default quantity of 1:

A function can also contain a docstring - a short description of the function that serves as inline documentation. When using a docstring, it should come immediately after the function name:

The advantage of using a docstring rather than simply putting a comment above the function is that the docstring is metadata that is preserved in the compiled code and can be accessed programmatically using the doc function that is built into the REPL:

ClojureScript draws some inspiration from the design by contract concept pioneered by the Eiffel programming language. When we define a function, we can specify a contract about what that function does in terms of pre-conditions and post-conditions. These are checks that are evaluated immediately before and after the function respectively. If one of these checks fails, a JavaScript Error is thrown.

Now that we have learned how to define functions mechanically, let's take a step back and think about what a function is. Think back to Lesson 4: Expressions and Evaluation where we developed a mental model of evaluation in ClojureScript. Recall how an interior s-expression is evaluated and its results substituted into its outer expression:

In Lesson 4, we took it for granted that an s-expression like (+ 5 3) evaluates to 8, but we did not consider how this happened. We need to expand that mental model of evaluation to account for what happens a function is called.

When we think about a function as a template for another expression, it fits nicely into our existing model of evaluation. Functions in ClojureScript are a simpler concept than in JavaScript because they do not have an implicit mutable context. In JavaScript, standard functions have a special this variable that can refer to some object that the function can read and mutate. Depending on how the function was defined, this may refer to different things, and even experienced developers sometimes get tripped up by this. ClojureScript functions - by contrast - are pure and do not carry around any additional state. It is this purity that makes them fit well into our model of expression evaluation.

Although ClojureScript functions do not have automatic access to some shared mutable state by default, there is one more detail that we have to account for when reasoning about how a function is evaluated. In ClojureScript, just like in JavaScript, functions have lexical scope, which means that they can reference any symbol that is visible at the site where the function is defined. When a function references a variable from its lexical scope, we say that it creates a closure. For example, we can reference any vars previously declared in the same namespace:

Since ClojureScript has the concept of higher-order functions, a function that is returned from another function can also reference variables from the parent function's scope:

In this example, the function returned from make-greeter creates a closure over greeting. If we were to call (make-greeter "Howdy"), the resulting function would always substitute "Howdy" for greeter whenever it was evaluated. Even though there was another value bound to the symbol greeting outside the make-greeter function, the inner function is not able to see it because there is another symbol with the same name closer to the function itself. We say that the namespace-level greeting is shadowed by the inner greeting. We will study closures in more detail in Lesson 20 and see how we need to modify our mental model of evaluation in order to accommodate them.

As we saw above, functions are ways to re-use expressions, but they are much more than that. They are the ClojureScript developer's primary means of abstraction. Functions hide the details of some transformation behind a name. Once we have abstracted an expression, we don't need to be concerned anymore with how it is implemented. As long as it meets our expectations, it should not matter to us anymore what happens under the hood. As a trivial example, lets look at several potential implementations for an add function.

The real power comes when we move from specific, granular function to higher levels of abstraction. In ClojureScript, we often find ourselves starting a new project by creating many small functions that describe small details and processes in the problem domain then using these functions to define slightly less granular details and processes. This practice of "bottom-up" programming gives us the ability to focus on only the level of abstraction that we are interested in without caring about either the lower-level functions that it is composed of or the higher-level functions in which it serves as an implementation detail.

This example should be unsurprising to readers with prior JavaScript experience. Recursion works essentially the same in ClojureScript as it does in JavaScript: each recursive call grows the stack, so we need to take care not to overflow the stack. However, if our function is tail recursive - that is, if it calls itself as the very last step in its evaluation - then we can use the recur special form just as we did with loop in the last lesson. The only difference is that if it is not within a loop, recur will recursively call its containing function. Knowing this, we can write a tail-recursive version of factorial that will not grow the stack:

ClojureScript is able to optimize this recursive function into a simple loop, just as it did with loop/recur in the last lesson.

In this lesson, we took a fairly detailed look at functions in ClojureScript. We learned the difference between fn and defn, and we studied the various forms that defn can take. We considered the model of evaluation for functions and presented them as a means of extracting common expressions. Finally, we looked at recursive functions and saw how to use recur to optimize tail-recursive functions. While JavaScript and ClojureScript look at functions in a similar way, we made sure to point out the areas of difference so as to avoid confusion moving forward.

Thanks for keeping DEV Community safe. Here is what you can do to flag kendru: