Databases as we know them have been around for over 40 years. When they first came about businesses would often keep data in separate systems and separate formats. There were a variety of reasons for these decisions. One of the side effects of these separate data stores is the need to combine together to be able to perform data analysis. This led to the long-standing practice of ETL, or Extract, Transform, Load.

ETL is a process to extract data from a starting data source, transform _the data in some fashion, then _load it into another data store. Sounds simple enough, but in fact, there is a lot of work going on under the covers and a lot of steps and decisions to navigate. These additional steps reduce the speed at which we can get meaningful insights from our data. Further, they rely on many assumptions about transforming data into what is assumed to be the correct format for later consumption – without knowing very much about the business questions to be asked of this data down the road.

From Data Warehouses to the Cloud 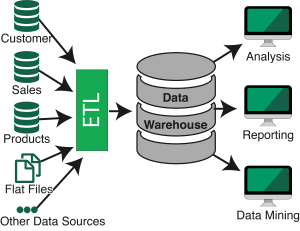 Creating a successful data warehouse can be a long, complicated, and expensive process. One of the technologies that have been created to help with the process is Apache Hadoop. Hadoop allows for the processing of massive amounts of data on commodity hardware with open source technologies. However, instead of simplification, the ETL and data warehousing landscape has only become more complex and cumbersome and the proliferation of tools combined with maturity and adoption issues have only increased the cost. Further, according to Gartner analyst Nick Heudecker, 85% of big data projects fail. Mostly due to the complexity of the process itself.

With the transition to the cloud many organizations are undertaking, ETL becomes even more complicated from a meaningful and timely data analytics standpoint. Moving data from one source to another takes time. Now there is hidden data transfer and compute costs and latencies to navigate. While some meaningful analytics can be performed on stale data, most modern analytics need to be as close to real-time as possible.

A few of the problems that we are faced with when setting up ETL processes are:

Use MongoDB Charts to Avoid the Headache of ETL

Companies today still have data in a variety of systems. In certain instances, ETL is the only option to be able to perform visualization and analysis of your data. Or, perhaps, you’ve explored ETL but haven’t taken the steps needed to get your data ready for analysis because it’s overwhelming.

If you’ve leveraged MongoDB as your database, the need for ETL procedures has been dramatically reduced with the introduction of MongoDB Charts, now in beta. MongoDB Charts natively understands the MongoDB Document Model allowing for the rapid creation of data visualizations over your data.

With MongoDB Charts you can connect to your MongoDB server, assign user authorization policies to your reports, and easily generate visualization dashboards. With over a dozen different chart variations to choose from, stunning visualizations are just a few clicks away.

MongoDB Charts allows for data to be visualized without performing ETL operations, saving valuable time and resources. You don’t need to write any code or rely on third-party tools. Further, you still get to leverage the richness of the Document Model.

For many roles in an organization, MongoDB Charts is a great tool for analyzing your data. There’s no need to go through the pain of the ETL process. It is the fastest way to build visualizations over your MongoDB Data, wherever it’s stored. On-premise or in the cloud hosted by MongoDB Atlas. Give it a try today!

This post was originally published on the MongoDB Blog.

The post Reducing the Need for ETL with MongoDB Charts appeared first on Blog of Ken W. Alger.

How I developed my first fullstack (MERN) project!