A cross-plattform Soundboard written in Go and Svelte

The "need" for this application arosed, when i wanted to have some fun and use a soundboard for some web conferences with friends and family. I am running on Linux and i couldn't find a software which worked like I wanted it to work. So I decided to write my own and practice my skills in my first real Go project.
It should just output some sound files with the push of a button. Then I could use the Jack Audio Connection Kit

JACK Audio Connection Kit (or JACK; a recursive acronym) is a professional sound server daemon that provides real-time, low-latency connections for both audio and MIDI data between applications that use its API.

to route that into my virtual input. Fortunately this was super easy because, when I was running it for the first time, it showed up as an own Jack client. So I just had to make the connection, like in the following example. The PulseAudio JACK Sink and the PulseAudio JACK Source are my virtual in- and output. They are set in my system as in- and output device as well. Then I can connect system (Microphone) and alsa-jack.jackP.122733.0 (my soundboard application) into the virtual input. It's also connected to my system output to hear the sounds myself. Then, in the meeting software i just have to select PulseAudio JACK Source as the microphone input and the participants will hear me as well as my awesome sounds! 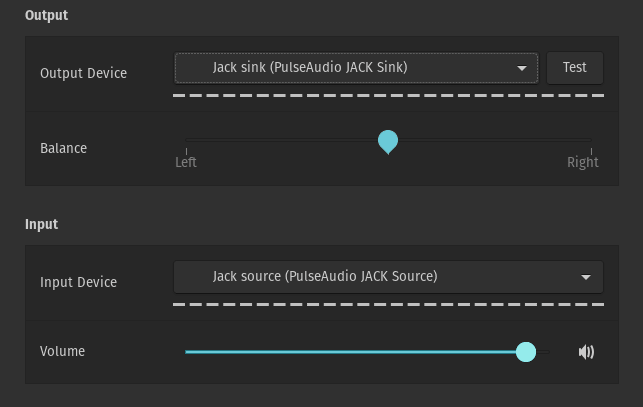 The server is written in Go. It's a simple HTTP-Server which serves the Web-UI and creates a websocket endpoint for the control messages. I used the package Beep to play the audio files in a folder and Gorilla Websocket for easy websocket handling.

When you start the application it searches for all the files in the specified folder. For that i created a package called audio and some structs to hold the necessary information.

Then a new Panel object is created like in this Beep example but slightly modified to also hold the newly created SoundDirectory and instead of a streamer i used the mixer to only resample one stream instead of every file stream. To learn more about the Beep package, look at the Wiki

In the main function I parse some command line flags, get all the audio files from the specified folder (code is not shown in this article), instantiate a new audio.Panel struct and pass this to the handleWebsocket function. After this, I start the server. There is some other code to serve the static files from the web interface, but I decided to keep that out of the scope of this article.

From there I can now send the SoundFile slice through the websocket connection with marshalling it into a Msg struct with some additional information.

As you can see, I defined my own message protocol. Every message has to have a type and with this information i know how to use this message. For example in a switch statement.

I read the JSON object from the connection with c.ReadJSON() and put the Type field in the switch statement. After this i can decide, what to do with the message.

For example, when the Msg is of Type: Play i use the function PlaySound() from my audio.Panel and give it the first file from the SoundFiles array (That's my solution to reuse the SoundFiles field multiple times. As an array of multiple files in the Load command or an array with only one item in the Play command).

If there is an error while trying to play SoundFile i create a new message with Type: Error and the error text itself in the message field. This is sent to my frontend and is handled with a notification for the user. But there are more possibilities like a message box with a kind of log of all the error messages.

Because, i have no idea how to build a Desktop UI i decided to build a web interface with my favorite JavaScript Framework Svelte. The Web-UI is served from my application and connects to the /websocket route to receive all the necessary data, which is also processed in a switch statement. In a simpler form it looks like this:

For each array object in sounds, Svelte will create a <SoundButton/> component. If the array changes, the buttons will dynamically change as well. Also, you notice that the comomponent has a custom event on:play. It will be fired when the button is clicked and send some data with the event. In Svelte you can just create an event dispatcher and name your custom event, so you can listen to it wherever you want to use the component. The SoundButton component looks something like this:

I know that this is a very basic explanation how everything works but i want to keep it short and basic. If there are any questions I'm happy to help and explain! Have a look at the full code at github:

A cross-plattform Soundboard written in Go and Svelte

Start the server application with these possible flags:

The go to localhost:8000 and you should see this:

This is my first post and public project i am showing to you. There is still so many things i could make better but I'm happy to hear your thoughts! I like to hear your suggestions or constructive critisicism about my code, the idea and the article itself! I'm working on building executables for every system, so it's easier to use for everyone and have fun with it!

Once suspended, kevinschweikert will not be able to comment or publish posts until their suspension is removed.

Once unsuspended, kevinschweikert will be able to comment and publish posts again.

Once unpublished, all posts by kevinschweikert will become hidden and only accessible to themselves.

If kevinschweikert is not suspended, they can still re-publish their posts from their dashboard.

Once unpublished, this post will become invisible to the public and only accessible to Kevin Schweikert.

Thanks for keeping DEV Community 👩‍💻👨‍💻 safe. Here is what you can do to flag kevinschweikert:

Unflagging kevinschweikert will restore default visibility to their posts.