Brace yourself, wall of text is coming. Microservices architecture is a never ending story. It took me a couple of years to collect so many resources about microservices. Now sharing the learning resources with you. Also available here: https://kgoralski.gitbook.io/wiki/microservices

The more I work with such architectures the more they feel that they are more about people and less about technologies. Actually "Microservices solve organizational problems and cause technical problems". For sure they are not a free lunch.

"What I see in large organisations is not a local phenomenon, but a pattern of how people interact. Therefore how systems interact. The boundary of human communication is the system boundary.

All credits go to authors from references.

"Conway's Law states that Organizations that design systems are constrained to produce copies of the communication structures of these organizations [...] the organization chart will initially reflect the first system design, which is almost surely not the right one [...] as one learns, he changes the design [...]. Management structures also need to be changed as the system changes..."

In defence of the monolith https://docs.google.com/spreadsheets/d/1vjnjAII_8TZBv2XhFHra7kEQzQpOHSZpFIWDjynYYf0/edit#gid=0

by "Designing and building a micro-services architecture. Stairway to heaven or a highway to hell?" - Sander Hoogendoorn

Patterns (check next section) that can help you do it: API Gateway, Backend for Frontend, Strangler, Anti-Corruption Layer, Sidecar, Ambassador

The fallacies of distributed computing are a set of assertions made by L Peter Deutsch and others at Sun Microsystems describing false assumptions that programmers new to distributed applications invariably make.

"Essentially everyone, when they first build a distributed application, makes the following eight assumptions. All prove to be false in the long run and all cause big trouble and painful learning experiences." by Peter Deutsch

The effects of the fallacies 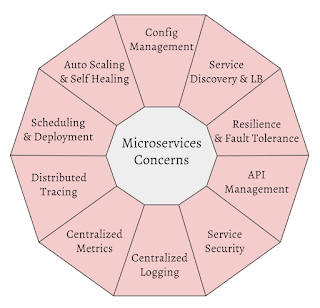 The 10 commandments of Microservices

(Again) "Conway's Law states that Organizations that design systems are constrained to produce copies of the communication structures of these organizations [...] the organization chart will initially reflect the first system design, which is almost surely not the right one [...] as one learns, he changes the design [...]. Management structures also need to be changed as the system changes..."

Microservices should be organized around Business Capabilities and Domain

"The driver is efficient resource utilization, or in other words, spending less money on servers and data centres. The promise of Reactive is that you can do more with less, specifically you can process higher loads with fewer threads. This is where the intersection of Reactive and non-blocking, asynchronous I/O comes to the foreground."

"The Reactive Essence of a Microservice. Asynchronous Communication, Isolation, Autonomicity, Single Responsibility, Exclusive State, and Mobility. These are the core traits of Microservices." by Jonas Boner

With bad decisions you can develop: "Distributed Monolithic Applications: a monolithic application disguised as a collection of microservices, stitched together using JSON, simultaneously writing to a single database" by Kelsey Hightower

Internal communication and REST vs messaging

"Communication between Microservices needs to be based on Asynchronous Message-Passing (while the logic inside each Microservice is performed in a synchronous fashion). As was mentioned earlier, an asynchronous boundary between services is necessary in order to decouple them, and their communication flow, in time—allowing concurrency—and in space—allowing distribution and mobility. Without this decoupling it is impossible to reach the level of compartmentalization and containment needed for isolation and resilience.

Asynchronous and non-blocking execution and IO is often more cost-efficient through more efficient use of resources. It helps minimizing contention (congestion) on shared resources in the system, which is one of the biggest hurdles to scalability, low latency, and high throughput."

Once suspended, kgoralski will not be able to comment or publish posts until their suspension is removed.

Once unsuspended, kgoralski will be able to comment and publish posts again.

Once unpublished, all posts by kgoralski will become hidden and only accessible to themselves.

If kgoralski is not suspended, they can still re-publish their posts from their dashboard.

Once unpublished, this post will become invisible to the public and only accessible to Krzysztof Góralski.

Thanks for keeping DEV Community 👩‍💻👨‍💻 safe. Here is what you can do to flag kgoralski:

Unflagging kgoralski will restore default visibility to their posts.