Have you ever failed to understand how the percentages work in CSS? Ever wondered why it's so messed up and has zero logic sometimes? Well, I do. That's why I'm writing this post to share my understanding through my researches and readings with you.

As a percentage, obviously there should be a target taken as a reference source. Most answers to this are the parent block of the element we assign the percentage. This is correct, but does not entirely cover all the cases. The most correct answer should be the containing block, meaning the block that contains our element and it doesn't have to be the direct parent.

Let's take a look at the below example:

In this example, I created 3 nested divs, which are 3 squares with the following characteristics:

Therefore, to identify which is the actual containing block of an element, it's entirely based on the position property of the element itself. You can read more on MDN.

However, for certain properties, the reference source for the percentage unit is neither the parent nor the containing block, instead, it is itself - self element.

For padding, either vertical (padding-top/padding-bottom) or horizontal (padding-left/padding-right) refers to the width of the containing block.

The result is that the child has a size equivalent to 1/2 width of the parent, which is a 3x3 square.

Similar to padding, the percentage of margin (both vertical and horizontal) refers to the width of the containing block.

The result is that the child is positioned 3 units away from the top and left margins of the parent (1/2 width of the parent).

For these properties (usually come with position), the vertical ones (top/bottom) refer to the height and the horizontal ones (left/right) refer to the width of the containing block.

An incredible property for animation/transition, it also supports percentage value. However, this one does not refer to its containing block, but instead refers to itself.

The background-size property brings the complexity of percentage unit to a new level 😄
The percentage value of this property now refers to the background positioning area, which I interpret as similar to the containing block, but with an addition of these 3 factors:

The 3 factors are given by the background-origin property. You can read more on MDN.

The result is that the background image has been stretched to have a size of 1.5x1, corresponding to 1/2 size of the child.

In this example, the same image and layout was used as the previous. As we changed the value of background-position, some observations we can see:

Note: background-position: 0 50% is equivalent to:

Apparently, there are some calculations behind the percentage of this property, instead of just the distance between the image's top and left edges to the child's. Through some researching and testing, it appears that the background-position property relies on the following calculation before yielding an actual value:

In this case, with

For font-size, the percentage value solely refers to its direct parent block.

In this example, I use the same layout as the very first example, with the font-size assigned as below:

While might not be as popular, I also mention this property as it also supports percentage. The percentage value of line-height relies on the font-size of itself.

The actual height of the whole block is ~329px,

I also tweeted a cheatsheet to summarize what is written so far, maybe it will come in handy to remember the meanings at first: 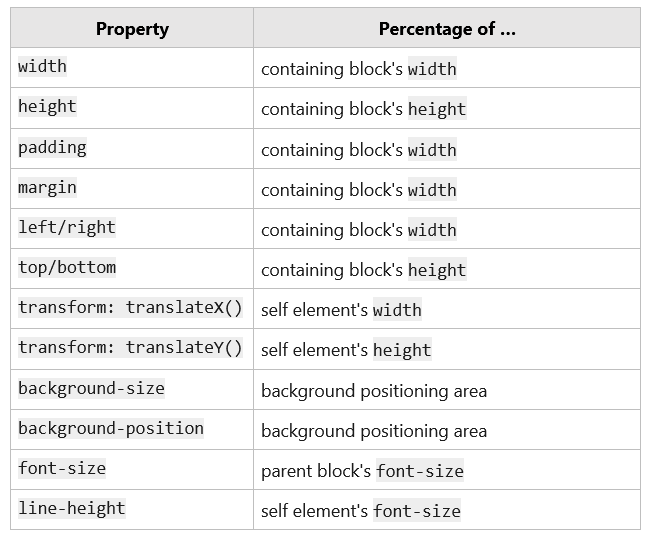 And this is a collection of all the examples in the article: https://codepen.io/collection/xKwgdW

Once suspended, khangnd will not be able to comment or publish posts until their suspension is removed.

Once unsuspended, khangnd will be able to comment and publish posts again.

Once unpublished, all posts by khangnd will become hidden and only accessible to themselves.

If khangnd is not suspended, they can still re-publish their posts from their dashboard.

Once unpublished, this post will become invisible to the public and only accessible to Khang.

Thanks for keeping DEV Community 👩‍💻👨‍💻 safe. Here is what you can do to flag khangnd:

Unflagging khangnd will restore default visibility to their posts.