There might be some confusion regarding using NODE_ENV variable in Node.js apps. A few things you need to be aware of:

(1) Do not set NODE_ENV to anything other than production, development or test.

When you deploy your app to let's say Google Cloud Functions, the NODE_ENV variable will always be set to production, you will not be able to override it.

Similarly, when you run unit tests, the NODE_ENV variable will always be set to test by the test runner (this is a good default value that you don't want to mess around with, too many tools depend on it).

When you run your app locally, NODE_ENV needs to be set to development. If you're using a tool such as Webpack, it's going to be handled for you.

(2) Use custom environment variables such as APP_ENV, APP_VERSION to tell the app in which (deployment) environment it is running. For example:

Most likely you want to use one of the following values for setting APP_ENV variable - production, staging, test (QA), development (shared development), or local (local development).

APP_VERSION can be set to latest or the OS username when you run/test the app locally. And once deployed it would be set to the actual version number by CI/CD pipeline. This will be particularly helpful when you need to notify users about the new version of the app that had been deployed:

(3) Ensure that the correct NODE_ENV (or, BABEL_ENV) variable is passed when you build the app with Babel for local testing vs production deployment.

P.S.: You will be surprised how many developers are struggling with this issue. Here is some random comment from GitHub: 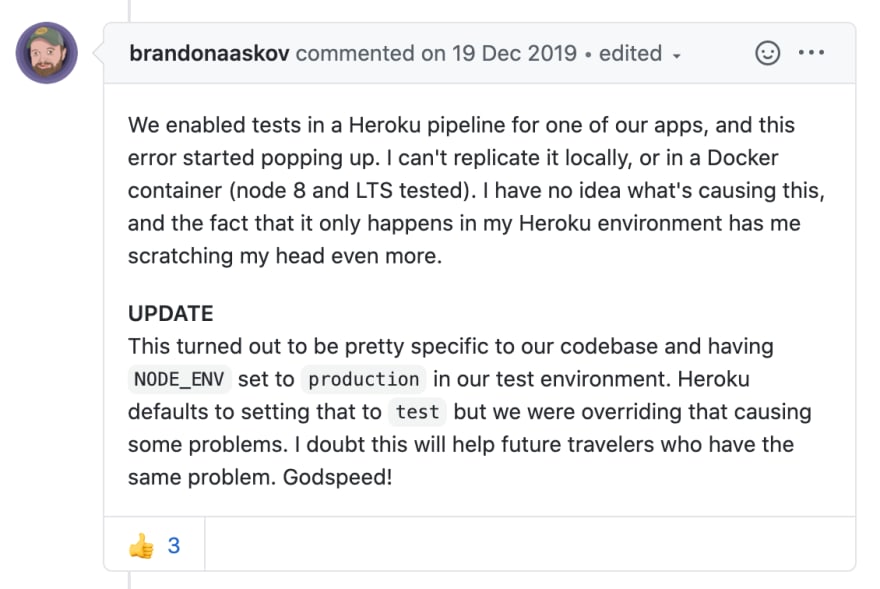 Find a complete example of a Node.js application setup here:

Once suspended, koistya will not be able to comment or publish posts until their suspension is removed.

Once unsuspended, koistya will be able to comment and publish posts again.

Once unpublished, all posts by koistya will become hidden and only accessible to themselves.

If koistya is not suspended, they can still re-publish their posts from their dashboard.

Once unpublished, this post will become invisible to the public and only accessible to Konstantin Tarkus.

Thanks for keeping DEV Community 👩‍💻👨‍💻 safe. Here is what you can do to flag koistya:

Unflagging koistya will restore default visibility to their posts.