Although rebase is not a complicated concept itself, many people have trouble understanding it.

I believe this is mostly because people new to git postpone or never get to learning the rebase command because they are overwhelmed by all the other stuff necessary to just survive with git. And the fact they keep hearing rebase is a dangerous command makes them keep postponing it's learning.

So if this applies to you too, stay with me to learn how git rebase works on a simple example.

Say you are on your project's master branch (we’ll display only the last 4 commits):

Now you want to develop some cool new feature on a different branch so you create one with git checkout -b feature and make two commits. Now your master and feature branches look like this:

But now someone reports a bug on your application and you quickly switch (checkout) to your master branch to find and fix the bug. After some time you do fix it and push (and deploy) the change. Everything is fine again and you can come back to your feature branch.

This is how your branches are gonna look like afterward:

As you see, the history of the feature branch has changed. If someone would now look at it he/she would think you made (checked out) your feature branch after the bug fixing commit.

So this is great right? Why just not use it all the time? Well, there is a catch. Remember how when Doc and Marty came back to the future it was a bit different? Well, that happens with git rebase too, but don’t worry, your code will stay the same, only the checksums of the commits on your feature branch will change. And what are these checksums? Well, you probably noticed that 40-chars long string that you see right to every commit when you do git log:

That's the checksum. You can think of checksums as unique identifiers for commits and because of the way git generates them (you can check my blog post on git’s data model for more info) they change on our feature branch after rebase.

So, if the commits had these checksums before rebase:

Then after the rebase, the checksums on the feature branch would change:

And this is why you keep hearing git rebase is a dangerous command. Because it alters history and you should use it with caution.

But why exactly is this dangerous and when? Well, let’s say you are not the only one working on the feature branch, but there are more people pulling and pushing changes to it. And now you do your rebase and (force) push the changes to the feature remote. Now, when your colleague Bob tries to pull from the remote feature, everything explodes because his local version of feature branch has a different history than the remote version. 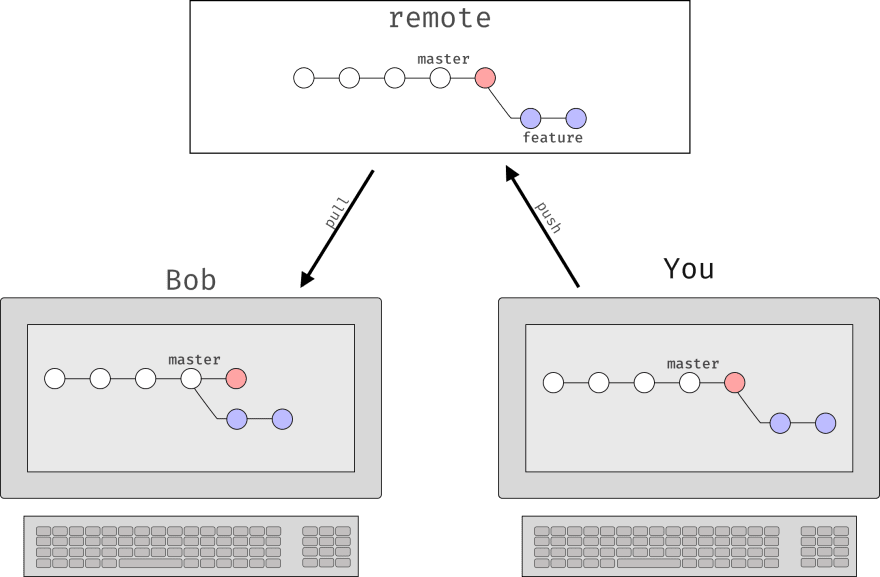 OK, so Bob’s computer won't actually explode, but there is no nice way for him to fix this situation. So, as a general rule of thumb, if you are working on a public branch (that other people are pulling changes from), you will not do a rebase on that branch. If, on the other hand, you are working on your local branch and haven’t pushed it to the remote server yet, or you did but it is still only you who is working on that branch (you must be sure of that) then you can do a rebase on it.

Difference between EmptyDir and HostPath volume types in Kubernetes

Build a Native Desktop App with Angular and Electron