This is an introductory post, that will be followed by separate tutorials and workshops where we will build a fully working blockchain application.

Before we jump into blockchain application development, we always need to have:

We all know the sysadmin magic that had to be done in order to get a blockchain node running in the past. As a consequence a lot of developers got turned away by the sheer complexity of the development environment setup or missing cryptographic libraries and implementations. Luckily for all of us, our HERO - The ARK Deployer came along. Delivering the promise of seamless and easily customizable blockchain deployment in three simple steps.

Everything we learned in the field (meetings with organizations, PoC projects implementations, hackathons and workshops) combined with our expert knowledge has guided us towards building a product to enable easy and simple deployment of your very own custom chain in a only a few minutes.

All ARK based bridgechains are accompanied with free and open-source SDK's, that enable you to jump right into application development and leave the blockchain protocol and sysadmin details to be taken care of by our automation tools and SDK implementations in more than 12 programming languages . Feel free to join our friendly chat at https://ark.io/slack and ask for help and guidance in our help channel. 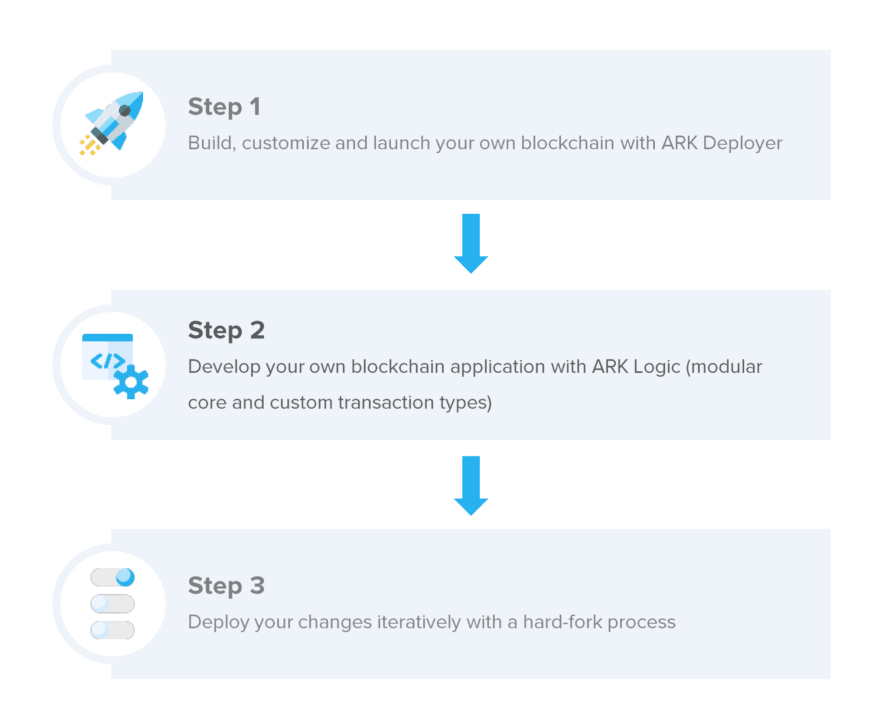 With ARK's modular core our distributed-servers/nodes running in the background translate into containers - where you can deploy your own blockchain based applications and you don't need to worry about consensus protocol or peer-to-peer network mechanics - it's a protocol thing, just like TCP/IP, well a lot more complex; but it's there running in the background, delivering security, trust and immutability - delivering the promise of blockchain.

From the start of my journey in the blockchain space, I always wanted to build complex applications on top on this excellent technology. One of ARKs' promises was/is to deliver tools and best practices that will close this gap and make blockchain application development a breeze. One of our first team accomplishments towards this goal is ARK Logic working hand in hand with the ARK Deployer.

This introduces and further strengthens the role of the ARK Ecosystem, by bringing in new interchain monetization services allowing businesses to fully exploit and research new crypto driven business models. Our blockchain application development approach is closing the gap between traditional development practices by bridging the concept of software libraries and blockchain development. 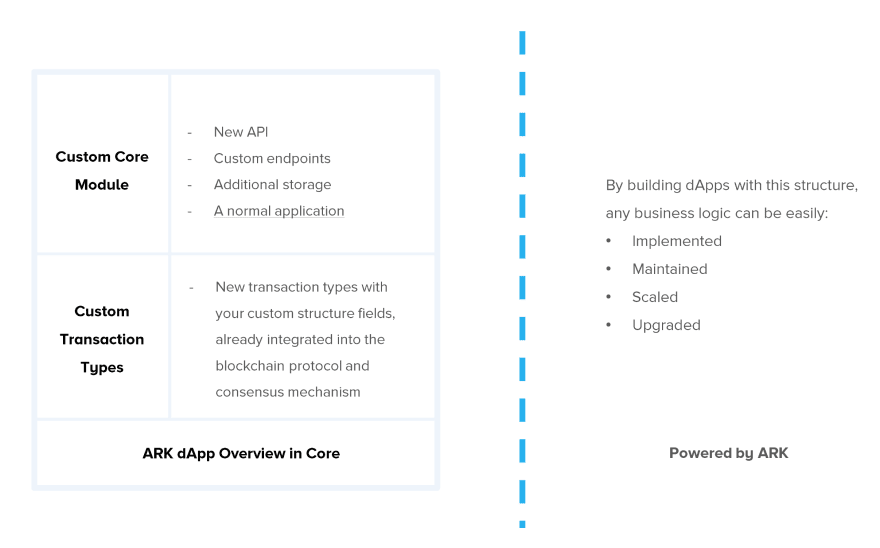 This is how we see the distributed blockchain applications development and deployment on our core-technology stack: 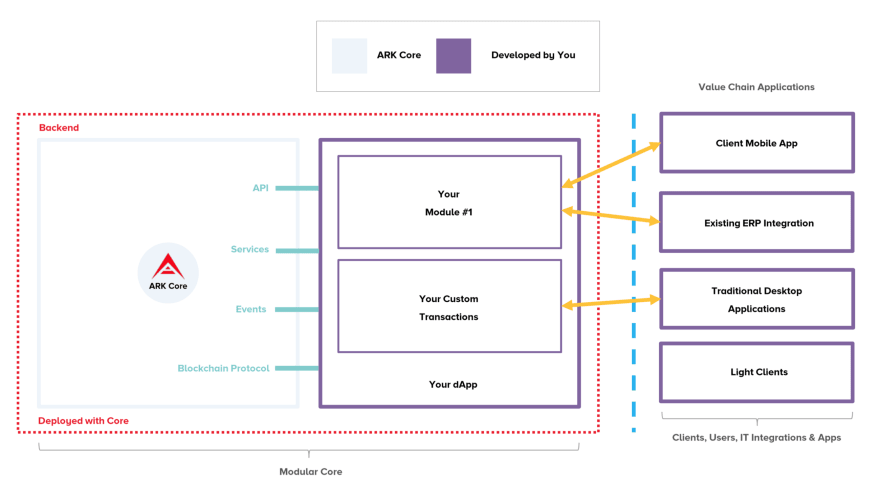 Ok, so what now? Now we can deploy a module, like in most web applications - but where is "the blockchain/the ledger" and how do we use it?

Don't worry, we got you covered with ARK Logic - Enabling your application to run in a modular fashion on the distributed network. Your application life cycle is maintained by our Core and is inherited by the overall life cycle of a blockchain node. A strong benefit of plug-able applications/modules is having access to the blockchain mechanics in a very simple and developer friendly way. Blockchain interaction is something we take very seriously, and we deliver this via the following approaches.

In this section we will look into five core approaches that enable you to seamlessly develop distributed blockchain applications on top of our platform. As a developer you will learn:

Interacting with the blockchain state

The core-blockchain package is the central entity around which everything revolves. It provides a state-machine that controls the state of your node and switches between states to sync, rollback or recover from a fork. It holds all of the information that is important to know when you want to see what the current state of your blockchain node is. Do not trust the database, trust the in-memory data it exposes, as it's updated in real-time.

Interacting with the database

You can access blocks and transactions in a very simple and efficient way by using the database plugin.

Use events to listen and react to changes

Core provides a package called core-event-emitter which exposes an instance of the Node.js EventEmitter. A common use-case is that your module will listen to events that core emitted in order to process the data for monitoring. Your module can also emit events that can be listened to by other plugins (or your own for internal use).

A common use-case for a plugin is that you process some data from within core and want to make use of that data with an external application. The easiest way to do this is through an HTTP server that exposes an API from which you request the data.

Pack and distribute your blockchain application as a module

The last piece of the puzzle is packing everything into a module and distributing it to your blockchain network. Our plugins are modular by design, meaning the concepts described above will all be already developed inside your own module. Having your own module, enables you to publish it to the largest package repository - npm, thus making it available to everyone.

Modules are very simple to write. At there core they are an object with a register property, that is a function with the signature async function. Additionally the plugin object has a required pkgproperty and several optional properties including version.

Part two will cover introduction to developing custom transaction types with our Generic Transaction Interface (GTI). The basic premise of GTI is to provide an easy way to implement and include new transaction types in Core without the need to modify more complex parts of the Core. It can be as simple as including pre-defined templates depending on the use case of the blockchain or re-using already present types and modify their parameters to introduce new ones. Developing custom transaction types enables you to add your own custom logic and data, validate it via existing consensus mechanisms and store it on-chain.

Once suspended, kristjank will not be able to comment or publish posts until their suspension is removed.

Once unsuspended, kristjank will be able to comment and publish posts again.

Once unpublished, all posts by kristjank will become hidden and only accessible to themselves.

If kristjank is not suspended, they can still re-publish their posts from their dashboard.

Once unpublished, this post will become invisible to the public and only accessible to Kristjan Kosic.

Thanks for keeping DEV Community 👩‍💻👨‍💻 safe. Here is what you can do to flag kristjank:

Unflagging kristjank will restore default visibility to their posts.