Orleans is an open source actor framework built by Microsoft research, and was used for halo cloud functionality! What is an actor framework? Another popular .net actor framework is AKKA.net, though I’ve not worked with it — and barely Orleans for that matter. Anyway…

The actor model in computer science is a mathematical model of concurrent computation that treats “actors” as the universal primitives of concurrent computation. In response to a message that it receives, an actor can: make local decisions, create more actors, send more messages, and determine how to respond to the next message received. Actors may modify their own private state, but can only affect each other through messages (avoiding the need for any locks).

Why should I care about Orleans, or actor model frameworks in general?

In a monolithic system, you can more or less only scale “up”. With systems built using microservices, actors, etc, you have the option of scaling “out”. What does scaling “up” vs “out” mean? To scale a system up, means adding more RAM, more CPU — more resources, to the hardware in which your system runs; but you are still constrained to a single “box”. To scale “out” means you can just add a brand new machine, generally to a “cluster” of some sort, that allows your system to much more easily add additional resources. Sure, you can always add more RAM/CPU to your existing machines in a microservices system, but you also have the option to have more machines! Options are always nice!

What does this all mean? With all the cloud services, containerization, and VMs readily available in today’s world, it can be extremely simple to spin up and down resources as necessary. Just add a new node to the cluster!

What can Orleans do?

Note all this information, and in further detail, can be found in the Orleans documentation. Orleans works off of a few concepts:

I’m hoping I can put together some more functional application as I learn more, but just to get started…

An Orleans application consists of a few separate pieces, generally all as separate projects: 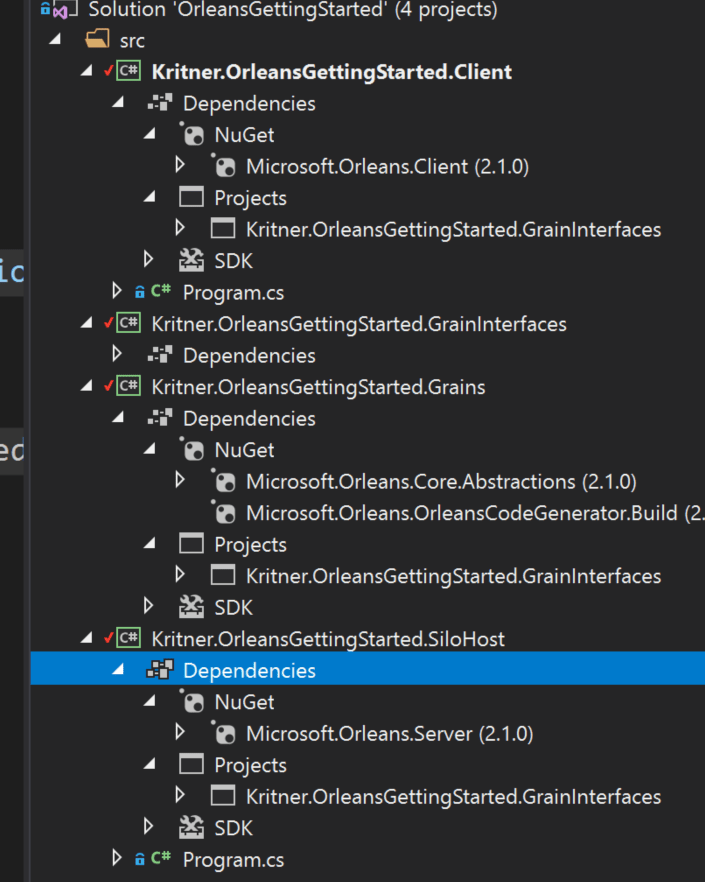 That’s all that’s needed to get started with “getting started with Orleans”! The repo at this point in time, while minimal, can be found at: https://github.com/Kritner-Blogs/OrleansGettingStarted/tree/8944333ae23f21e7873a356a191ceceb3cc91c97

Note in the image and repo linked above I had missed a dependency at this point. The SiloHost project should additionally have a reference to the Grains project, that would not be reflected in the above point in time. You could also go ahead and add references to Microsoft.Extensions.Logging.Console in the Client/SiloHostas well (will be needed later).

Let’s start with the most basic example — hello world. This won’t really show off what Orleans can do very well, but we have to start somewhere right?

A few (maybe?) non standard things happening in the above from what you may be used to:

The above grain interface simply takes in a string name and returns a Task.

Now for the implementation in the Grains project, class HelloWorld:

Again, mostly standard stuff here. We’re extending a base Grain class. implementing from our IHelloWorld, and providing the implementation. There’s really not much to our method, so AFAIK no reason to await the result (can someone correct me if I’m wrong? Async/await is still quite new to me).

We now have all that is necessary for Orleans to work, aside from that whole Client/Server setup and config — on to that next!

Next is the client and server setup, which we’ll be doing in our currently untouched projects of Client and SiloHost.

Note the below configuration is specifically for development, it does not, and cannot operate as a cluster of nodes (AFAIK) like a production configuration can/should.

In the above there’s a fair amount of logic going into making sure we can successfully get an instance of IClusterClient. This bootstrapping of the client only needs to be done in one place (and if you have multiple applications that use the same client, could be extracted to a helper class).

The actual “work” of the IClusterClient from a grain perspective is all done in the method DoClientWork.

That should be everything we need to get our Orleans demo working — and luckily the client/server configuration doesn’t really change much after its done, though the initial setup can be a bit tricky (most of the reason why i just copied the sample’s example).

Note: I added an additional NuGet package to both the Client and SiloHost projects to allow for pretty logging within the console window.

With an Orleans project, your normal application (Client as example) is reliant on the SiloHost being up and running. There is some retry logic built into the above client implementation, but not a bad idea to bring up the server prior to the client. 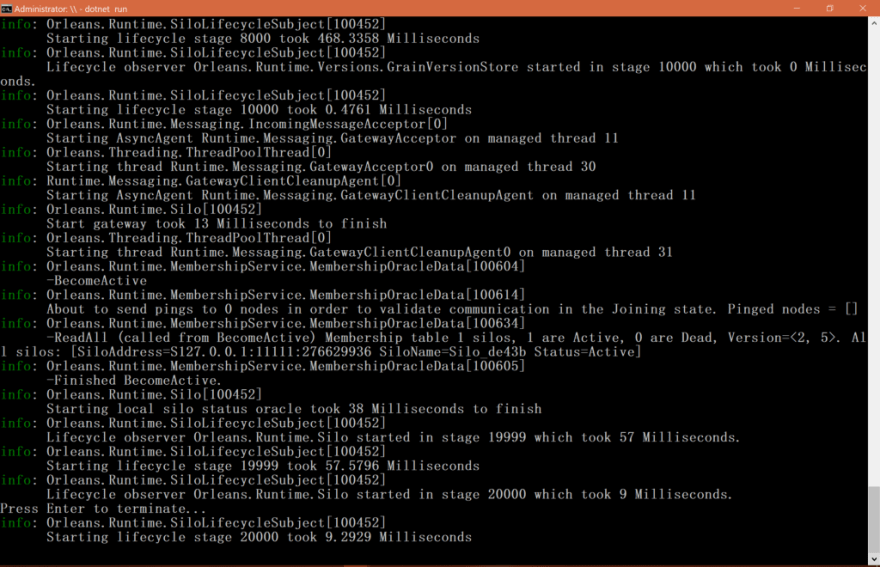 Your silo host should now be up, running, and await requests. 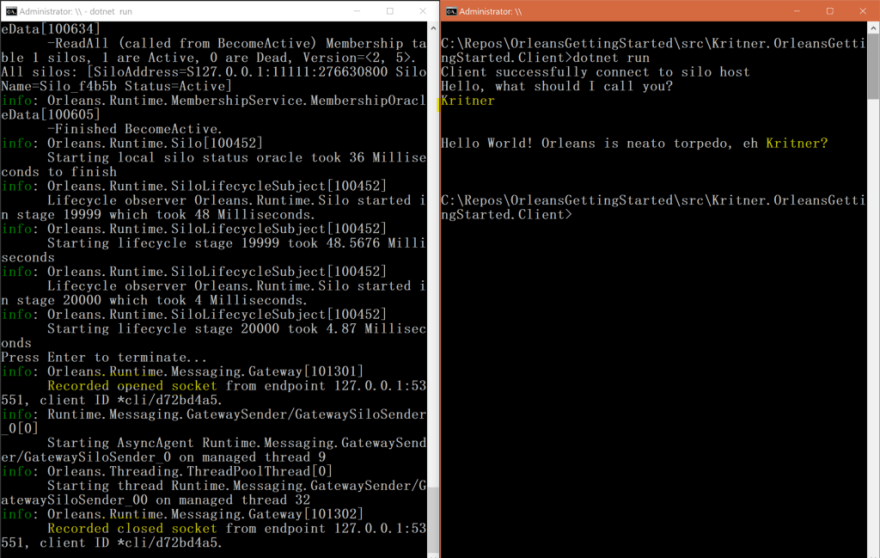 The above is of course, just a simple example, but it helps set the foundation of potentially great things to come!

The repository at this point of the post can be found at https://github.com/Kritner-Blogs/OrleansGettingStarted/releases/tag/v0.1

Tips I wish I knew when starting studying Software Engineering