While working on the post “Microsoft Orleans — Reporting Dashboard”, I ran into an issue where code generation seemingly stopped “generating”.

Here’s a compare of when Code Generation was working (pre the start of previously stated post), and when it stopped working while writing the post:

As you can see, not much had changed between the two, but for whatever reason, the SiloHost stopped being able to instantiate instances of my grains, or at a minimum the Client was saying that the SiloHost couldn’t. 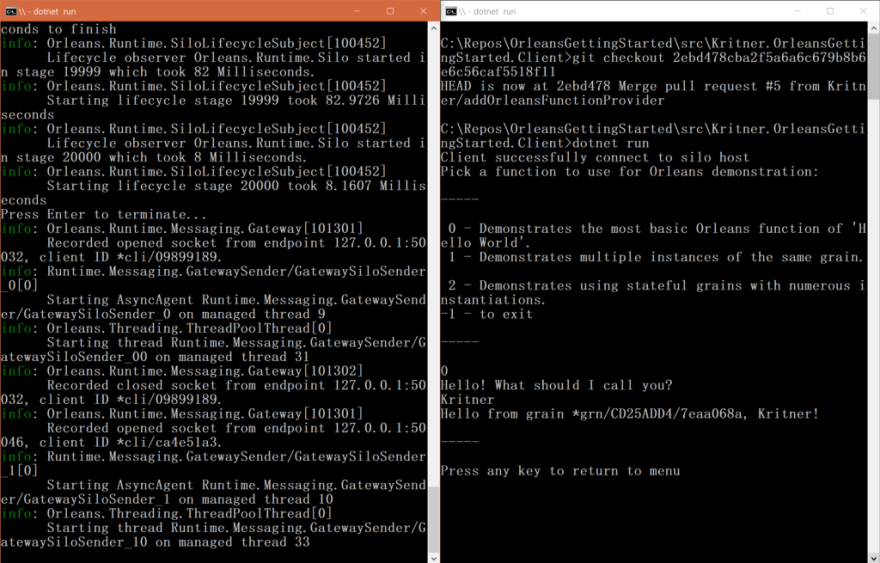 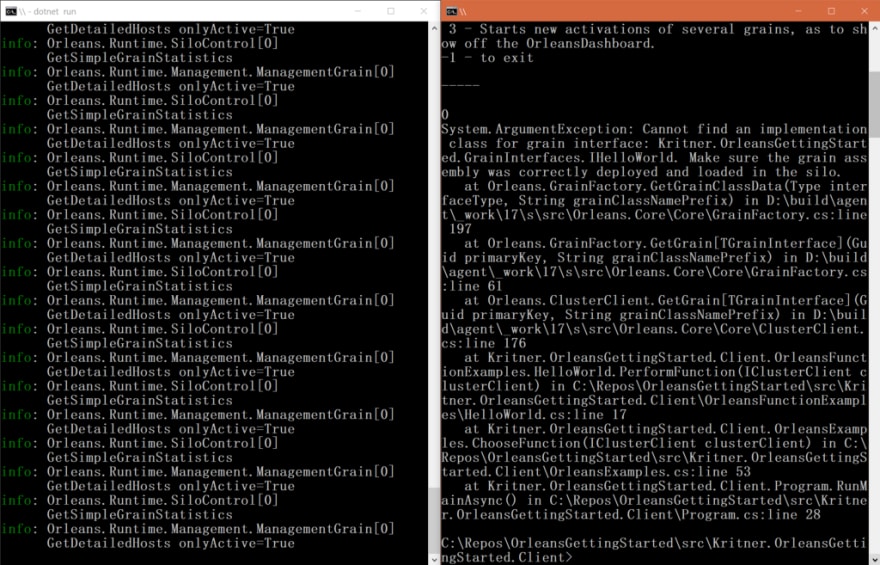 I have opened a GitHub issue to try to get clarification on what I’m experiencing; but in the meantime, there is a workaround.

I was under the impression that projects containing the Microsoft.Orleans.OrleansCodeGenerator.Build NuGet package would automatically run code generation, though that didn’t seem to always be the case as per the github issue I submit above.

In order to get around the code generation not firing, I took a few different steps. (Note, I’m guessing some of these steps could be omitted, but I just mostly tried to brute force it, and once it was working left it alone):

The interface I used for the grain interfaces, was created under Kritner.OrleansGettingStarted.GrainInterfaces:

The grain implementation interface was created under Kritner.OrleansGettingStarted.Grains:

The grain interfaces I have — IHelloWorld, and IVisitTracker were updated to additionally implement IGrainInterfaceMarker. The same was done for the grain implementations, but implement IGrainMarker.

Now that our grains and interfaces are implementing their new respective interface markers, we just need to register those interface types on the ClientBuilder and SiloHostBuilder as so:

Now that these changes have been made, the grains are being successfully called on the cluster from the client! Hooray!

The commit where this correction was put in place is located here: https://github.com/Kritner-Blogs/OrleansGettingStarted/pull/6/commits/9c271f085d22a66f8e8d3c3165eda863e5269508

I heard back from Sergey in the GitHub Issue:

Bits of Xperience: Displaying Rich Text After a Form Submission