I need to create a set of web tools for the company I started.
Since it's my company, I'm the one to decide on the technology to use and since it's a side-business for the moment, I'm not in a hurry to choose (within limits off course).

It's been a while since I've programmed in anything else than .net and C# or basic javascript with jQuery (anyone remembers this? :D) but I had the chance once to play with Node.js with PhoneGap and that made me want to try Node.js more.

I also recently tried Graphql and I loved it so now I want to use it.

After reading a lot of different things about Node.js and Graphql and all the solutions around them, I've come to the conclusion I wanted to create a solution combining Graphql + Apollo Server on the server side and Apollo Client + Vue.js on the client side.

I see the server side as an API and maybe even later use it with mobile devices application but that's for later. 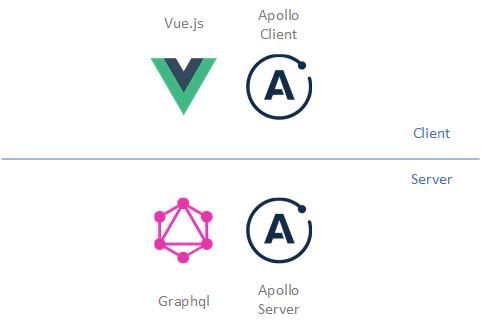 As a test, I could create a quick API with graphql and Apollo Server but now that I need to create the client side, I'm a little lost on how to implement this.

I'm wondering ... Do I really need both version of Apollo?
I like having the flexibility of an API but would you recommend to go simply with Apollo Client + Vue.js + Graphql?

Also, in my current plan, would I lose the benefit of Apollo Client if I don't use it directly with Graphql?

Still undecided on what to work for Twilio Hackathon