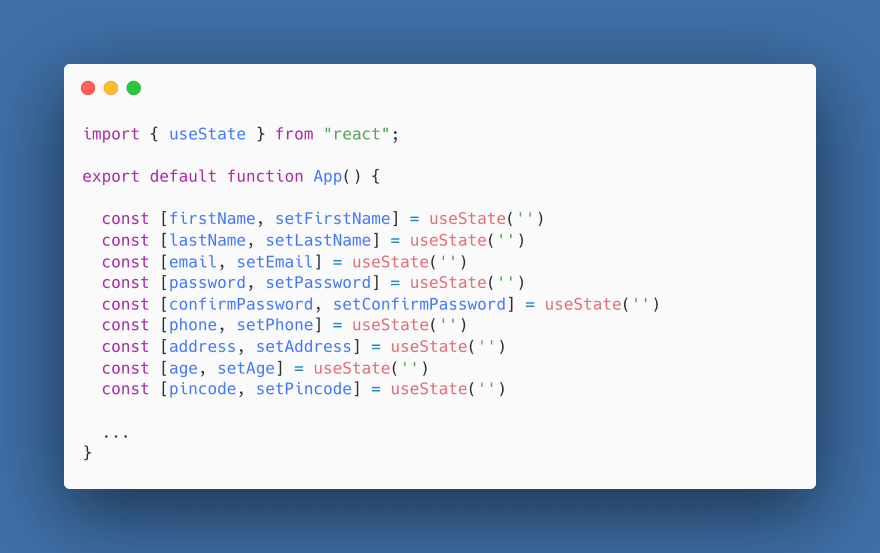 Man I feel sleepy even writing this for illustration!

Also, you're welcome, for blasting your eyes with that monstrous One Light theme code snippet. Some amount of white is good for attention aye! 😉

So... you get the point, In this post, I'll be trying to solve this problem in an elegant manner (certainly not the BS I did in my previous post, making a buggy React Form component which no one even bothers to have a look at!)

You can try this code & tinker with it in the same browser as you're viewing this post, thanks to codesandbox (code link)

For my beginner friends, who are new to React, what we did here was:

After the user has done typing their details in the input, clicking on the button with type='submit' declared in the form, will cause the HTML form element to call its onSubmit handler i.e our submitForm function.

Isn't that quite magical AND elegant? HTML does all the work for you from parsing the form input values to collecting the data & returning it in a map-like structure 🪄.=

3.Last but not least, we convert the FormData object which has our input values, to a plain JavaScript object with Object.fromEntries( ... ). Logging the, now created object, gives this output:

BUT! and that's a big but (pun intended), the cons of this approach is that you CAN'T write Controlled Inputs. For that, you HAVE TO declare a useState & It's corresponding onChange handler.

"What the hell is a controlled Input?"

Have a look at this example

This is a controlled input in React js, but for inputs like this, we can use the hybrid approach:

P.S:
Seeing HTML automatically handling inputs for us appears to be some kind of magic and to be honest, I hate when magic is occurring BUT some amount of magic is bearable for the sake of making the developer experience good 👌🏻

How to host your first site for free on GitHub Pages

Once suspended, kuvambhardwaj will not be able to comment or publish posts until their suspension is removed.

Once unsuspended, kuvambhardwaj will be able to comment and publish posts again.

Once unpublished, all posts by kuvambhardwaj will become hidden and only accessible to themselves.

If kuvambhardwaj is not suspended, they can still re-publish their posts from their dashboard.

Once unpublished, this post will become invisible to the public and only accessible to Kuvam Bhardwaj.

Thanks for keeping DEV Community safe. Here is what you can do to flag kuvambhardwaj:

Unflagging kuvambhardwaj will restore default visibility to their posts.