With our Maps SDKs for iOS and Android, you can create custom map interfaces for your mobile games. As an example, I put together a simple geography quiz game using our Maps SDK for Android. Don’t laugh, but its current name is “Tapper GeoChallenge”. Yes, that’s the best name that I could come up with. I’ve made the code open on GitHub so you can replicate the project or use it to build something new. 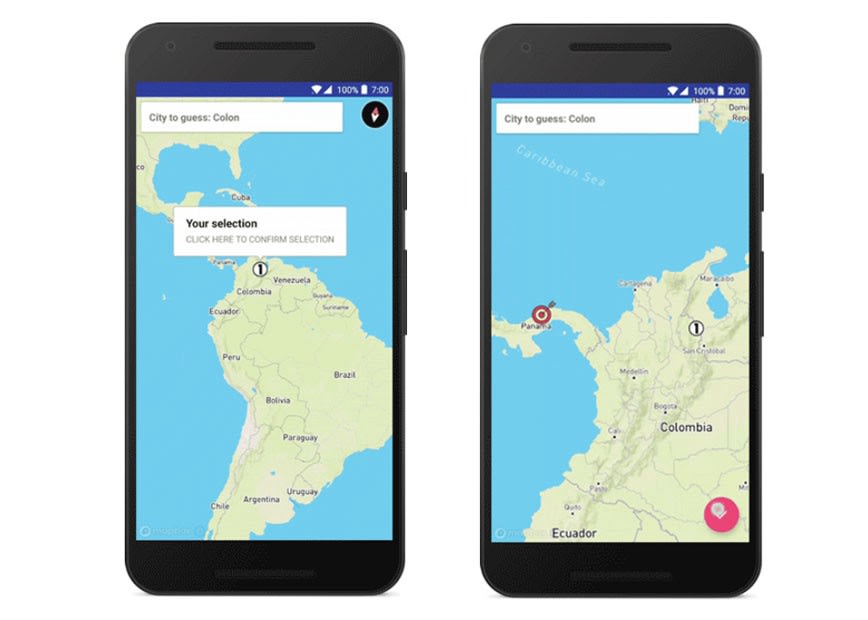 In a one player game, the app picks a city at random, and the user guesses what country it’s in. If you guess incorrectly, the app returns the distance between the player’s guess and the target city:

In a two player game, each player gets a turn guessing the country for the target city, and points are awarded for each correct guess.

The entire game exists in one screen and on a single map that’s using our Outdoors style. The game is using only features of the Maps SDK for Android, as well as a few Turf methods to calculate distance. The most complex code is basically keeping track of whose turn it is and which marker/map-click corresponds to each player. Give it a shot!

Visit the game’s Github repository, follow the README’s installation instructions, and download the code to start developing your own version in Android Studio. Here are some ideas for improvements:

Use the Maps SDKs for Mobile to incorporate maps into your mobile games. If you’re looking to create immersive experiences in 3D, AR, or console gaming, then check out our Maps SDK for Unity. Let us know what you build on Twitter, #BuiltWithMapbox.

Free and Useful Tools for Android Development and Blogging

How to Implement Super Live Chat: 3 Methods You Should Know

Once suspended, langsmith will not be able to comment or publish posts until their suspension is removed.

Once unsuspended, langsmith will be able to comment and publish posts again.

Once unpublished, all posts by langsmith will become hidden and only accessible to themselves.

If langsmith is not suspended, they can still re-publish their posts from their dashboard.

Once unpublished, this post will become invisible to the public and only accessible to Langston Smith.

Thanks for keeping DEV Community 👩‍💻👨‍💻 safe. Here is what you can do to flag langsmith:

Unflagging langsmith will restore default visibility to their posts.