GraphQL Java is one of the most popular GraphQL server-side implementations for Java that I've found (with over 5k stars at the time of writing). If you're planning to expose a GraphQL API from a Java or JVM application, then this is an excellent library to start using.

This blog post will cover how to use GraphQL Java within a Spring application that exposes an endpoint for clients to send queries to. GraphQL Java does have its own official documentation covering this subject; however, I found it a bit too simplistic, which made it harder for me to wrap my head around it. I hope you don't think the same about the content of this post, although I guess you could write your own that is even more complicated than my examples!

I will be writing this from the assumption that you understand some of the basics of GraphQL. I won't be covering anything extremely complicated, so the basics will give you a good base for the content of this blog post. Knowing how to create a schema type and a query that does nothing fancy will be all you need. You can find this information from the official graphql.org site.

Also, here's a heads up that I have written my examples in Kotlin, although I tried to keep it friendly for Java readers.

Below are the Spring and GraphQL related dependencies used in this post:

The schema we'll use

Below is the GraphQL schema that we'll use throughout this post:

I'll cover how we register and interact with the schema later on; knowing the shape of the types in the schema will set up the following sections.

GraphQL Java uses DataFetchers to fetch data to include in the result of a query. More specifically, a DataFetcher retrieves the data for a single field when a query is executed.

Every field has an assigned DataFetcher. When an incoming GraphQL query is received, the library will call the registered DataFetcher for each field in the query.

The official DataFetcher documentation can be found here.

It is worth pointing out now, as it personally caused me a lot of confusion to begin with, that a "field" can mean two things:

This is important as it means that a DataFetcher can be linked to a query. In fact, every query must have an associated DataFetcher. Not doing this will cause GraphQL query requests to fail as there is no entry point to begin processing the query.

I keep mentioning DataFetchers, but what are they really in terms of code? Below is the DataFetcher interface:

So when I say DataFetcher, I'm really talking about implementations of the DataFetcher interface.

Let's look at an example DataFetcher that will respond to the people query:

The DataFetcher for this query:

The PeopleDataFetcher returns a List<PersonDTO> to correspond to the [Person] specified as the turn type of the GraphQL query. The PersonDTO contains the same fields found in the Person GraphQL type:

A field for relationships has been omitted to simplify the examples

When PeopleDataFetcher.get is executed, it queries the database, maps the results to PersonDTOs and returns them.

When an incoming GraphQL query, like the following is received:

The following is returned after GraphQL Java has called the PeopleDataFetcher:

That covers a first look at what DataFetchers do. We'll expand on them in the following sections to improve your understanding of GraphQL Java.

As mentioned in the previous section, every field must have an assigned DataFetcher. That means for the Person type:

You would need to associate DataFetchers to:

That seems a bit onerous, especially when you might be able to retrieve all of this data in one go. For example, retrieving data from a database could be the difference between 1 SQL query vs 4.

To resolve this, any field without an assigned DataFetcher uses the PropertyDataFetcher by default.

The PropertyDataFetcher uses various methods (e.g. getters or keys in a map) to extract field values from the parent field (could be a query or schema type).

The PeopleDataFetcher returns a PersonDTO for each Person it finds to respond to the top-level query. This can be thought of as the "parent field".

The GraphQL library will then move down to fetch values for each queried field in Person, for example, firstName and lastName. Using the PropertyDataFetcher, it accesses each PersonDTO returned by the parent field's DataFetcher (PeopleDataFetcher) and extracts the values using their getters.

PersonDTO.id is how you write Person.getId in Kotlin (the applies to the other fields).

You might need to run that through your head a few times so it makes sense. I only properly understood this after debugging the library when my code wasn't working correctly.

Writing a DataFetcher for a schema type's field

The PeopleDataFetcher we've seen throughout this post responds to a query. Now let's look at a custom DataFetcher that should be associated with a schema type's field.

It looks similar to the PeopleDataFetcher we saw previously, except for the new call to DataFetchingEnvironment.getSource. This method allows a DataFetcher to access the object returned by the DataFetcher associated with the parent field. After accessing this object, information is extracted from it (PersonDTO.id) to be used in the SQL query executed by the PersonRelationshipsDataFetcher.

Writing a DataFetcher for a query containing an argument

Queries become far more worthwhile when you can pass arguments into them.

To handle this you'd want a DataFetcher like the one below:

The important method call here is to DataFetchingEnvironment.getArgument, which does as it says and extracts an argument from the incoming GraphQL query. Handily, getArgument allows you to specify the type the argument should be (so you don't have to convert it yourself).

Setting up a GraphQL instance

You've seen how to write a few DataFetchers by this point; we now need to tie everything together by creating a GraphQL instance and registering an application's DataFetchers.

The @Configuration code below does just that:

The purpose of this @Configuration class is to create a GraphQL instance that GraphQL Java uses. Further setup is not required as it will be picked up by Spring Boot's auto-configuration.

The first step of creating the GraphQL instance requires reading the application's GraphQL schema. SchemaParser.parse can take in Files, InputStreams, Readers or Strings, which it parses (as the class name suggests) and returns a TypeDefinitionRegistry to be used later. In this application, the schema is defined in a resource file which gets fed into SchemaParser.parse. This is what allows the GraphQL library to understand incoming queries and what can or cannot be handled.

Each DataFetcher in this example application is injected into the configuration class and linked to the RuntimeWiring instance through its type method. Each TypeRuntimeWiring.Builder instance (returned by newTypeWiring) requires 3 fundamental inputs:

After registering each DataFetcher, the RuntimeWiring instance is finalised using build.

Finally, the TypeDefinitionRegistry and RuntimeWiring created previously are passed through a SchemaGenerator and then into GraphQL.newGraphQL to retrieve a fully functional GraphQL instance.

Sending a GraphQL query to the application

With the setup complete, the application now exposes a /graphql endpoint provided by the auto-configured code in graphql-java-spring-boot-starter-webmvc. This endpoint is where clients will send GraphQL queries to.

In this section, we'll look at how to send a query using cURL and Postman (which has GraphQL functionality) and view the returned data.

The query we are trying to send: 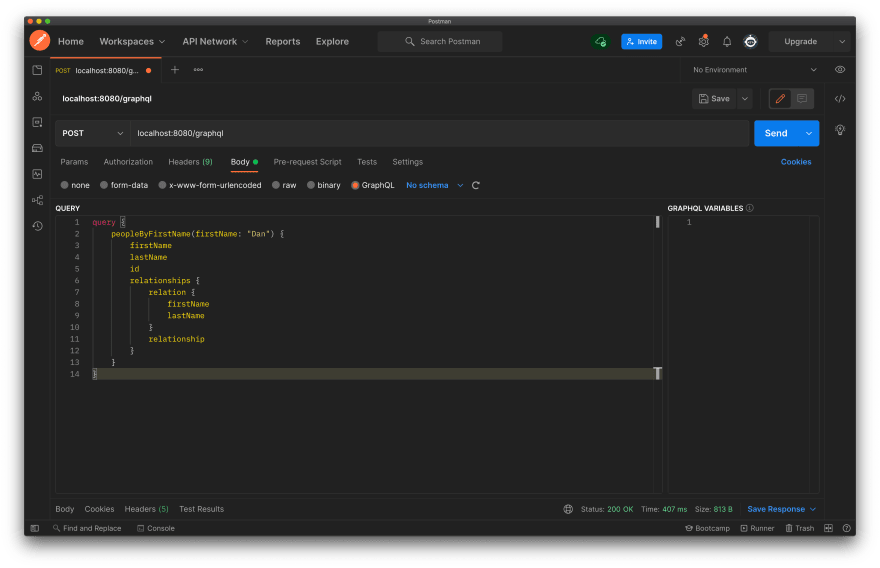 Both of these methods return the same data (I would be worried if they didn't):

The most crucial factor here is that a POST request is used. It seems standard for GraphQL APIs to use POST requests for both fetching and mutating data. This threw me off for a while, as the error I received from the /graphql endpoint didn't cause me to believe it was due to using the wrong HTTP verb.

For clarity, using the wrong HTTP verb (e.g. a GET) through Postman leads to the following response and logline:

Improving the registration of DataFetchers

The registration of DataFetchers could be improved as they are currently registered by injecting every DataFetcher by name into the GraphQLConfiguration class and manually associating each with a type and field name. This isn't too bad right now since the application is small; if you argued that it already looks dodgy, then I'd agree with you.

To make the code more maintainable and extensible moving forward, we can introduce a new structure for defining DataFetchers and registering them.

We can achieve this by defining a new interface that specifies the type and field name a DataFetcher should be linked to:

By using TypedDataFetcher, you can retrieve all its implementations as Spring allows injecting of Lists containing all instances implementing an interface.

Combining this interface with modifications to the DataFetcher registration code in GraphQLConfiguration brings it all together:

The registration now uses the typeName and fieldName provided by each TypedDataFetcher, breaking the rigid link between DataFetcher implementations and the types, fields or queries they represent. Adding new TypedDataFetchers becomes straightforward after making this alteration; you create a new implementation, define the typeName and fieldName, annotate with it @Component, and the rest is handled for you.

GraphQL Java lets you do what the name suggests, support GraphQL queries within Java (or other JVM languages).

It does this through associating DataFetchers to types and fields that you write and pointing incoming queries their way. With the library handling the parsing of queries, it frees you to focus on implementing the DataFetchers that contain your application's primary functionality.

I'd love to try and summarise how to use GraphQL Java further; however, I already struggled to write the post in the most coherent way as possible; there is no way I could condense it to a few sentences.

Appwrite vs. Hasura vs. Apollo

2244. Minimum Rounds to Complete All Tasks

Once suspended, lankydandev will not be able to comment or publish posts until their suspension is removed.

Once unsuspended, lankydandev will be able to comment and publish posts again.

Once unpublished, all posts by lankydandev will become hidden and only accessible to themselves.

If lankydandev is not suspended, they can still re-publish their posts from their dashboard.

Once unpublished, this post will become invisible to the public and only accessible to Dan Newton.

Thanks for keeping DEV Community 👩‍💻👨‍💻 safe. Here is what you can do to flag lankydandev:

Unflagging lankydandev will restore default visibility to their posts.