Consumers make up the Kafka client code that reads records from topics, working at the opposite end of the chain as producers and benefiting from the same client features such as connection pooling and network buffering. Thus, providing you with a concise API that still allows you to write highly effective applications.

The diagram below visualises the interaction between a consumer and broker, where the consumer receives records stored in a topic.

In the following sections of this post, we will take a closer look at how consumers work and the client code needed to leverage them in your applications.

The code written in this post is in Kotlin, but similar code should be applicable for any JVM language. Furthermore, clients in other languages will also look virtually the same.

The first step is creating a KafkaConsumer:

When creating a KafkaConsumer, you must provide its configuration via a Properties object or a Map<String, Object>. In addition, KafkaConsumer’s constructor also accepts values for the key.deserializer and value.deserializer properties.

You can find the available configuration options in Kafka’s documentation.

Now that you have an initialised consumer, you’ll need to subscribe to some topics to receive records.

A consumer must subscribe to topics to retrieve the records stored in them. To be clear, a single consumer can subscribe to multiple topics at once. You do not have to make a separate consumer per topic.

Even though subscribe sounds straight forward, it does quite a lot of work behind the scenes, dynamically assigning a consumer the partitions it receives records from. The assignment of partitions becomes essential when you start writing more exciting applications that contain a more significant number of consumers.

After a consumer subscribes to some topics, it needs to request records to pass them off to the rest of the application. This process is called polling and is done using the poll function.

When calling poll, you must pass in a timeout duration to allow your application to move along if no records are available for retrieval.

When no records are passed to a consumer within the timeout duration, it will progress with an empty collection of records.

The objects returned from poll are ConsumerRecords. These are similar but different from the ProducerRecords used to create records stored within a topic. 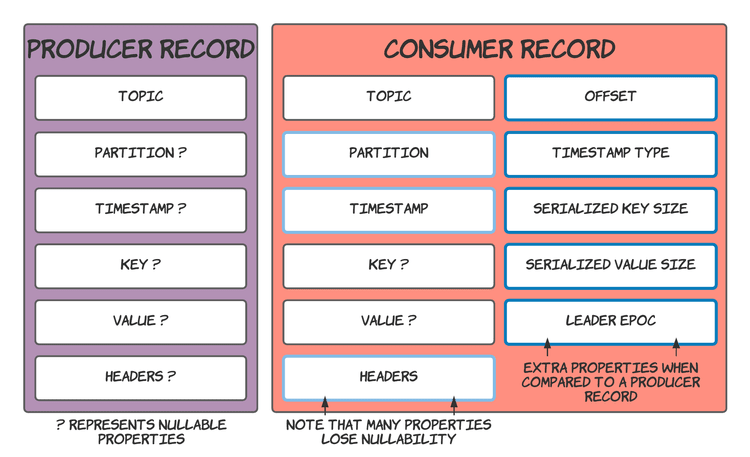 ConsumerRecords have several extra fields and a few that become required compared to ProducerRecords.

A ConsumerRecord contains the following fields:

You don’t have to worry about generating these fields as you will only be receiving them after calling poll. The values are either defined by a ProducerRecord or generated by Kafka.

ConsumerRecords implements Iterable and can therefore be iterated over directly.

poll returns a ConsumerRecords object which provides some convenience functions and can also be iterated over directly. For example, it allows you to extract all the records for a particular topic, which is handy since you can subscribe to multiple topics in a single consumer.

You’ll then want to loop over the returned ConsumerRecords and process them in whatever way your application desires.

Every record stored in a partition is assigned an offset which denotes how far they are from the start of the partition. Adding new records increases the offset, guaranteeing that more recent records will always have a higher offset than older records (based on time stored).

Offsets are not significant when persisting new records as this part is all handled by Kafka; however, the concept plays an important role when consuming records.

Consumers use partition offsets to keep track of what records have been processed. As it polls records and computes whatever needs computing, it needs to note down the offsets of these records, so that the consumer knows what point to start polling records from in case of failure.

The process of keeping track of a consumer’s offset is known as “committing”. In that it commits the current offset for a partition to storage.

A consumer does not store its offsets locally. Instead, it sends them to the Kafka broker, who then persists them to disk.

Maintaining offsets in this way keeps the importance of consumer clients low within the context of the whole application. Starting, stopping and even destroying the machines running the consumers is possible without preventing the application from recovering. You can initialise a new consumer client and instantly continue processing from where the previous consumer was.

Furthermore, it allows you to focus your efforts on securing the broker’s machines rather than maintaining maximum security on many consumer clients. The broker contains the critical information, and keeping offsets in this way works to ensure this.

To commit a consumer’s offsets to the Kafka broker, you should use one of the following methods:

These methods all commit a consumer’s offsets and come with different degrees of control. For example, the overloads of commitSync and commitAsync that have no arguments are fully managed solutions that determine the offsets from the polled records — setting the offsets of each partition to the highest offset value contained in the received records.

The other options give you more control but require you to do more work and set the offsets yourself.

You will want to commit your offsets after processing records. This will form part of the standard process when working with Kafka. Poll records, process them and commit the updated offsets to confirm that they should not be received again.

Committing can also be done periodically in the background if configured to do so, see the Kafka documentation - enable.auto.commit.

To finish the process of polling records, processing them and committing the updated offsets, you’ll want to group these steps and repeat them as your application requires. For most use cases, repeating these steps in a loop might suffice, which would provide a consumer that infinitely pulls records from a Kafka broker and feeds them to the rest of the application.

This loop resembles what you’ll see in the Consumer’s JavaDocs as well as many examples online.

The most straightforward way to do something infinitely is to use a while(true) loop run on a dedicated thread:

I don’t have anything left to say here, so let’s close up this post.

The overall process of using a Kafka consumer consists of:

I have also put together a nice diagram to showcase this (I think it’s nice anyway!). 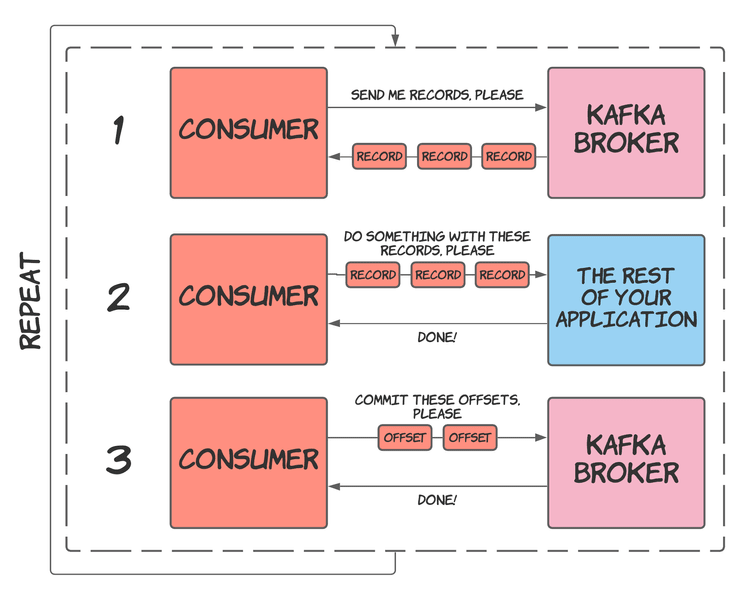 Bringing all these steps together gives you the following code:

We have now looked at how to write the consuming side of an application that leverages Kafka. Combining this along with the information covered in previous posts about topics, partitions and producers, you should now have enough knowledge to write applications that interact with Kafka.

In the following posts, we will cover topics (not a Kafka topic) that expand on what we covered so far to allow you to start writing more effective Kafka applications.

Scoped recomposition in Jetpack Compose — what happens when state changes?