After much procrastination, I finally took and passed the AWS Solutions Architect Professional certification, using the "virtual" testing option from Pearson Vue. 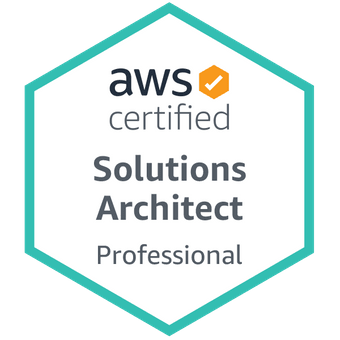 I'd been reluctant to take the test virtually after reading a few horror stories about long waits for the proctor to be available. I also wasn't sure that I could get 3 hours undisturbed at home. However, I was able to take advantage of some time when our office was empty and the virtual experience went fairly smoothly.

Having taken the Advanced Architecting on AWS course I felt somewhat prepared but needed a way to find the gaps in my knowledge. I'd seen a recommendation for the Tutorials DOJO Practice Tests, and because they were inexpensive I decided to give them a go.

I took 3 of the timed tests, and they helped me build up a list of topics where I wasn't confident in my knowledge: 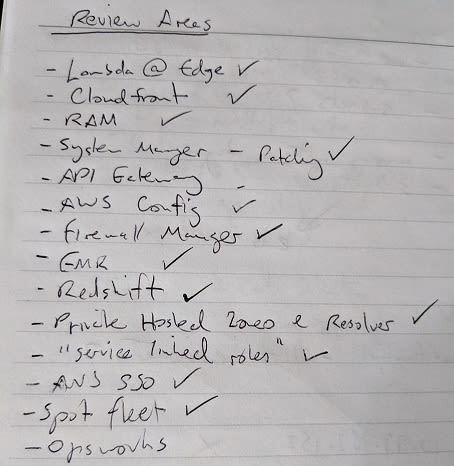 I then went through the AWS documentation and FAQs for these topics, and in a few cases tried a few things out (e.g. Patch baselines in System Manager). This was a lot to go through, but I used the questions from the test as a guide to which details were important to remember.

AWS currently has 2 testing providers, PSI and Pearson VUE. Both are in the process of re-opening their testing centers in Ohio, but with limited capacity and a backlog of people wanting to complete tests, there was a wait of a couple of months for availability at the local testing centers. So I opted to use the virtual testing option from Pearson VUE that has availability 6 days a week.

You will receive an email after scheduling the test recommending that you do a system test on the hardware and in the location where you will be taking the test. This checks internet speed and access to your camera and microphone, but also takes you through the steps of taking photos with your phone of yourself, your id and test location. I did the hardware test at home, but skipped the rest knowing that I was going to be in a different location.

You will need a webcam!

You can start the test up to half an hour before your allotted time, but being late can cause you to fail the test. I turned up at the office in good time and got myself set-up.

I made the mistake of taking the entire system test before the test. This did the hardware check and then walked me through taking and uploading the photos I needed, but didn't save any of that information.

Once I'd repeated this process the second time to take the test for real, the kiosk browser opened for the test and I was instructed to wait for a proctor to be available. Fortunately it was just a couple of minutes before they appeared on the chat and asked if they could start a call with me to prepare for the test.

I can see why a delay at this point would be annoying - I'd already stowed my phone and everything else away, so I was just siting there staring at the screen.

I was asked a few questions about the location I was taking test test in, what I had plugged into USB (a mouse), and had to scan the room by turning my laptop around. They did ask if I could cover the windows of the conference room and unplug the TV on the wall, but neither of those were possible and they seemed OK with that.

When you're running the test there's a bar at the top showing your camera image and with a chat button to talk to the proctor. The format of the tests is a little different to the software used for the office practice tests and at PSI testing locations (the button to submit an answer is annoyingly all the way down in the bottom right), but it basically works the same way with a question counter and time countdown at the top right and an option to mark questions for review.

At one point near the end of the 3 hours when I was reviewing one of the questions I'd marked, I had covered my mouth with my hand and the chat window popped up and I was told not to do that, but otherwise I had no further interactions with the proctor.

This was a difficult test, and there were only a small number of questions where I thought the answer was immediately obvious. For most of the questions it was a process of elimination with many answers being several sentences that are identical apart from a few words. Some of the answers are wrong because they suggest doing something that is not possible, but others are wrong because they don't meet the criteria in the question (e.g. most cost effective).

I made sure to answer every question as I went, but marked some of them for review later in case I had extra time. I saw that I was doing OK for time, so I reviewed as I went, and after picking an answer I'd double check that it matched the criteria in the question, and in a few cases that caused me to change my answer because I wasn't really answering the question that had been asked.

I had about 30 minutes left after answering the 75 questions, and wasn't sure whether I was going to pass or fail. I quickly reviewed the questions I'd marked (perhaps 10-15?), but only changed one answer.

Then after confirming that I was done reviewing my answers I got the normal questionnaire about my testing experience and how long I've used AWS.

Finally it told me I'd passed (yay!) and to click the button at the bottom left to end the test.

I wish I'd been able to take a screenshot of the message saying that I'd passed, because honestly I started to doubt it as soon as it was no longer on the screen.

I received the email confirmation 2 days after the test.

Some of the topics that came up in my exam were:

End of the journey?

I finally managed to add the Solutions Architect Professional sticker to my laptop that I picked up at re:Invent 2017, but I've still got a sticker for the DevOps Professional certification, so perhaps that one is next?

If you read this because you're getting ready to take the certification exam, I wish you the best of luck. It's difficult, but achievable.

Once unpublished, this post will become invisible to the public and only accessible to Andrew May.