There's no escaping it, and if there is one final outtake to this whole post, it's probably this one - you should produce content.

Any form and format. I don't think it matters. What I do think matters is that when you do create something, you do it out of wisdom, not hard work. I will explain that in a minute.

First, let me present you with some context.

If you don't know me, which is quite likely, I'm Leo, a guy sharing his journey on becoming a master coder 🌈

It all began a year ago when I started learning HTML, CSS, and everything else. I can share details on the path I took and the resources I'm using to learn everyday if any of you wants it. But that's for some other time.

As I started to dive deeper into tech, I realized I needed some sort of authority on social media.

After all, there's no better brand than your name.

And the best place to start would be good old Twitter.

My goals, clear as paper, were:

The new account would be for my developer life. I would follow tech topics, cool engineers, and some founders.

After setting it up, I had something like this: 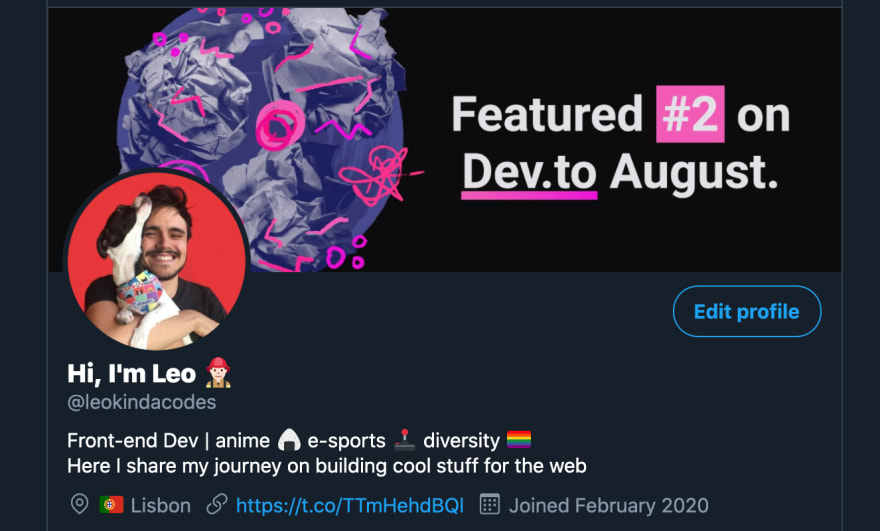 That's how it looks right now. But I change it all the time, lol.

Anyway, I believe I grew to 100 followers in about a month. And there's no harder time to grow when you have no social proof or backup of who you are online.

For example, if you receive a notification that someone followed you, and you go check the person out and they have 1522 followers, you might feel incline to follow them back.

It happens because they have social proof of some sort. In this case, its numbers. But if the person has 4 followers? Yeah, not so much strength on hitting that following back button.

So my primary objective was growing my social proof aka my following.

And how did I achieve those 100 followers?

Milking the shit out of a blog post I created 😈 😈

I don't understand organic growth on Twitter, and I wouldn't leave it for luck.

So after brainstorming a bit, I decided I would write an article, but not a technical one. I didn't want to spend a lot of time on it.

I would write one of those "Top Resources You Should Know" lists you see everywhere. But mine would have actual great resources because I'm a favoriting/bookmarking god. I had tons of it.

Well, I would spam on anywhere I could.

I found a forum called DEV (hi) that had some interesting engagement. It seemed to have a good rotation of "trending" posts, and so I created an account on it. I would also post on my blog, although I knew it would get me zero views.

I finished writing the article in about 50 minutes.

I think I organized a well-constructed clickbait with a nice image, and because of that, it got #1 of the week on the same day and #2 of the month a while later.

Of course, I did my research. I used the most populated tags on the forum and read a few trending posts to catch the gist of it.

So I made a post that got 1k likes. Yay. Where are my followers? 💰

This is where you work wiser and not harder.

The post itself gave me zero followers. The important catch here is that I received 200 followers on DEV. I guess it lacked that sort of content and some people just dropped a click on the follow button.

Your profile in there is irrelevant, people don't care about it. But here lied the trick: when I followed them back, the platform allowed us to chat privately 🤾🏻

Bingo. I could harass people. I mean chat.

I guess it was hard work... well whatever.

I was impressed by the number of replies I got.

Yes, I'm not proud of copy and pasting a bunch of messages, but I had no real idea if I would even get a single reply, so I just went with it.

I think it was about 60% of respondents, with is NUTS. My theory is that no one uses DM here, so when that new blue icon pops up, they get curious and open up.

I probably spent two hours sending DMs to people and telling them to follow me on Twitter.

But that wasn't enough. The seat was still warm and I felt I could capitalize some more while I could. So I built a Newsletter to see how many I could convert on that riding wave.

I built it using Next.js and Mailchimp, and I plan on writing about how I did it soon. You can check the final product here.

It probably took me a solid week to build, buy a domain, and deploy. I used the numbers I got from the post to boost social proof on the Newsletter, even tho I had none. 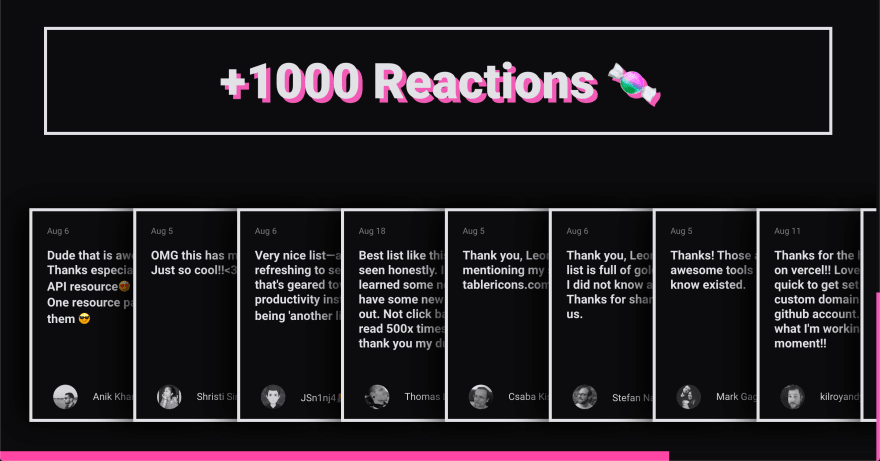 I then got back to those DM's and also reached out to some new followers I got, still results from that post. I invited everyone to subscribe to this new thing.

After reaching out to those people, I got 45 subscribers. Which is not an amazing number by any means - but so isn't 100 followers on Twitter.

I knew no one in the tech field and had a brand new account.
That's some pretty solid results if you ask me.

I also published the Newsletter on Product Hunt, but it flopped. I got 1 upvote, and it was from my cousin. Obviously. You need a proper plan to launch it on PH, which I didn't.

And that's about it.

I had a lot of fun chatting on the DMs with everyone here on DEV.

I hope you got any useful knowledge out of this gigantic mess. If you did, maybe you should... follow me on Twitter?

Why do you think I even wrote this?

leonardo jaques 👨🏻‍💻
Here I share my journey on building cool stuff for the web 🧙🏻‍♂️
By Popular Demand, Bubblegum.dev 🍬 is Live. Glycerin Levels Going Up.
#webdev #javascript #react #productivity
My favorite resources being a freelancer as a side hustle 💎
#webdev #beginners #productivity #react

Once suspended, leomjaques will not be able to comment or publish posts until their suspension is removed.

Once unsuspended, leomjaques will be able to comment and publish posts again.

Once unpublished, all posts by leomjaques will become hidden and only accessible to themselves.

If leomjaques is not suspended, they can still re-publish their posts from their dashboard.

Once unpublished, this post will become invisible to the public and only accessible to leonardo jaques 👨🏻‍💻.

Thanks for keeping DEV Community 👩‍💻👨‍💻 safe. Here is what you can do to flag leomjaques:

Unflagging leomjaques will restore default visibility to their posts.