If you didn’t know this already, I usually cross post all these on DEV. When I cross-posted about why accessibility isn’t an edge case, I got a comment wishing accessibility was more straightforward to implement. I didn’t find learning to make accessible solutions to be that challenging once I was up to date on HTML and CSS best practices, so I was genuinely curious about where they found it difficult. When they answered, it seemed like the primary pain point was ARIA.

I’ve seen a ton of confusion about ARIA and when it should and shouldn’t be used. What do these ARIA attributes even mean? Is there a list of all the attributes? I am thinking about making this into a series, maybe going over a few ARIA attributes a week and how they can be used, whether I like them, etc. Before I get into the weeds about all the ARIA attributes though, I really need to get a few things straight about what ARIA is used for, and what I don’t think you should use it for.

What the hell is ARIA?

ARIA is a bunch of attributes that you can add to your elements to give them extra context and meaning. This can be useful for a lot of things. Here is what I find helpful about ARIA:

The documentation on ARIA is pretty damn intimidating. Even as an accessibility person, I find it a bit daunting. The way I learned about ARIA is by opening up a well-used application like Twitter. I then inspected the elements and searched in the HTML for aria and looked at all the attributes. I then turned on my screen reader and actually listened to what was actually announced when I reached that particular element. For example, when I use VoiceOver on Mac and open up the homepage of Twitter, this is the markup of my profile picture in the upper right-hand corner:

NOTE: For readability, I have removed some of the attributes and classes from the markup

I spot two ARIA attributes at first glance: role="button" and aria-haspopup="true". So what does this mean when I use my screenreader.

If you see what is read, you’ll notice the words “Pop up button.” Because the markup is a link, without those attributes, it would read as just a link. I honestly think that this markup could be changed to a <button> because, at the time of this reading, I cannot use the link to go to the href attribute value (/settings) and acts like a button. But the context of knowing this is a popup may be super helpful to a screen reader.

I will say, I am usually hesitant to use ARIA when I first start building things out. You may have noticed I critiqued this markup about what I would change, and it is for this reason that I try to avoid using ARIA unless it is necessary to add context. This is why in my technical posts where I am coding something from scratch, you likely won’t see ARIA attributes at first. I have quite a few reasons for that which leads me to...

What ARIA is NOT?

The first time I presented about ARIA at a meetup, a blind developer was in attendance and he grilled me. It wasn’t fun. The reason for this is because a lot of times ARIA should never be the focus of accessibility, especially nowadays that we have HTML5. HTML5 solves a lot of the semantic issues screen readers used to face.

Here is what ARIA is NOT:

Hmm, that’s actually all I can think of. Let’s break this into an example to make more sense of what I mean. If you don’t like the default styling of the <button>, but you like all the built-in button features, this HTML will not magically make all the button defaults work:

Let’s say you have a click event for that button. If you read my article about 3 Simple Tips to Improve Keyboard Accessibility, you know that buttons have some default functionality built in. Without doing anything else, all this does is announce this as a button with a screen reader. However, you are unable to focus on it without a keyboard. So the next step is to make sure that we have a tabindex on it. Let’s try that.

Can we now use a click event on it? Let’s try it out. Let’s update the HTML to include an ID to make it easier to target with JavaScript:

Now, I’ll write some basic JavaScript here just to see if it works.

As you can see from the gif, the ARIA role or tabindex didn’t fix it. We have to listen for a keypress event on the button. I’m going to debug this with you so we can walk through how much extra work this is. 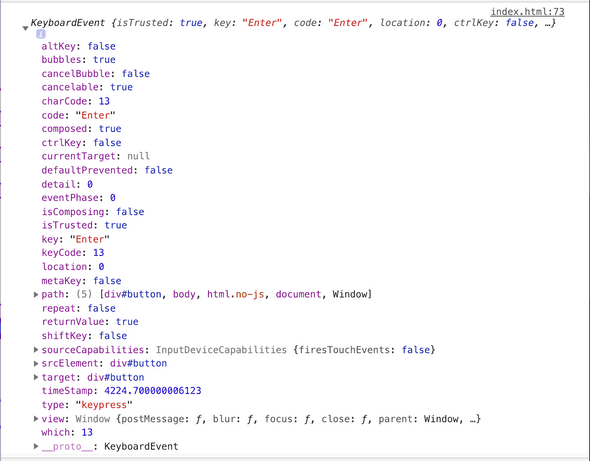 Let’s think about what we are doing here. I am adding a keypress event on the button and checking out what properties we have in the event object. This is important because if we want to replicate a button, we have to take note of what key we are pressing when we have the keypress event. The built-in HTML button behavior works on both keypresses Enter and Space bar. When we look at the console log, we want to use e.code. So here’s what I’ll update with a conditional.

So, while this isn’t the most challenging thing to do, it’s way easier to change the <div> into a <button>. You can use CSS to get rid of the default styling, and overall you’ll make your life a lot easier accessibility wise!

The way I like to think about ARIA is context. Sometimes you don’t need additional background - the HTML is surely enough. Sometimes it could be better though, especially if it’s a custom widget. I’ll do more about ARIA in the future regarding specific attributes and what they do - mainly because the documentation can be a bit daunting. Cheers to that!

Feel free to reach out to me on Twitter if you have questions about this blog post!