This week we're gonna take a look at O(2N). This runtime complexity can be found in recursive functions.

Let's take a look at an example in which recursion is used to print out the moves required to solve the Tower of Hanoi puzzle. If you're unfamiliar, the Tower of Hanoi is a game in which you have a stack of disk on one peg that decrease in size as you go up that stack. The goal is to move all the disks to one of the other two pegs by only moving one disk at a time and you can't put a disk on top of a smaller disk. In the following diagram we can see the steps needed to solve the puzzle when there are only three disks in the tower. 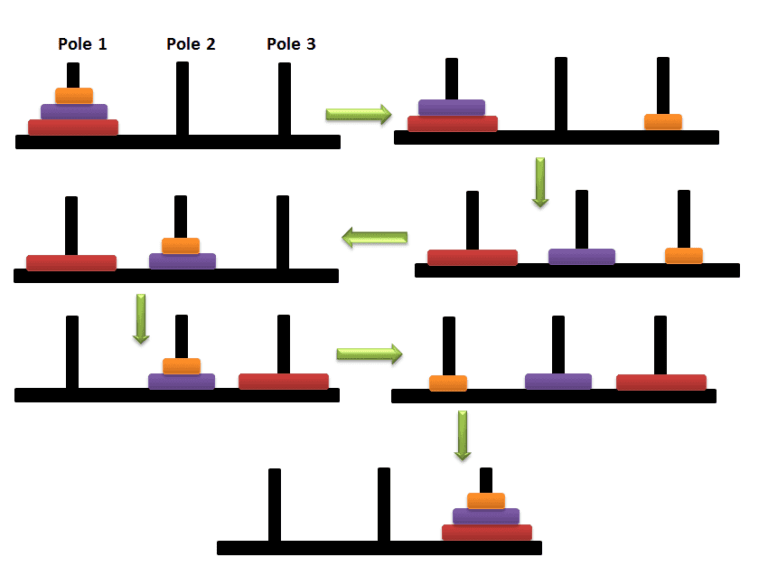 Now that we understand the problem, let's take a look at the recursive solution in JavaScript.

How this function works is pretty interesting, but I'm not going to cover it here since were focused on Big O complexity of this function. To read more on how it works, click one of links under references.

To determine the Big O runtime complexity we need to look at how many recursive calls are made. In this case there are two, and each of those recursive calls passes in n-1 as the new number disks. So a each call to the function doubles the number of recursive calls until n-1 is equal to 1.

The pattern to watch for is that if a recursive function makes more then one call, the complexity is often O(branchesdepth), where branches refers the number recursive calls made and the depth refers to the depth of the tree this creates.

Also keep in mind that even though constants are usually dropped when expression Big O complexity, the base of an exponent does matter. So, O(2N) is very different from O(8N).

A day in the life of a Tech Trainee

Thanks for keeping DEV Community safe. Here is what you can do to flag lofiandcode: