Ubuntu installs some updates automatically, and so does Debian 9+ with GNOME. This is due to unattended-upgrades being installed and enabled by default.

When enabled, unattended upgrades automatically downloads and installs some important updates, and that's ok in many cases except:

What's more, I've noticed on multiple systems that this can cause quite frequent errors like: "Could not get lock /var/lib/dpkg/lock - open (11 Resource temporarily unavailable)", which are not easy to fix, especially for new users (by the way, see Linux Uprising Blog for a how-to on recovering from such dpkg lock errors). Sometimes this error never goes away without user intervention (probably because some upgrade failed) which is quite bad since because of this error you're not able to install or upgrade packages until you fix it.

For this reason, I personally prefer to disable unattended upgrades, and just perform the upgrades myself when time permits it. To stop automatic updates on Ubuntu or Debian, you have two options: 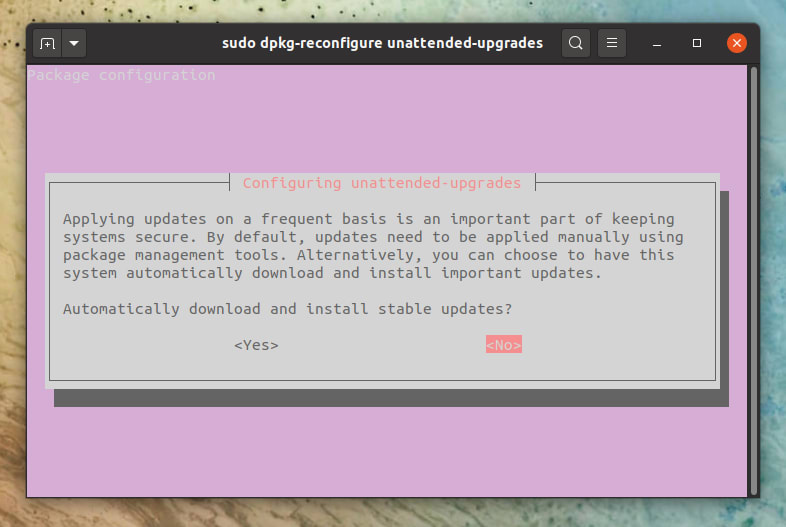 This will ask you if you want to automatically download and install stable updates or not. Choose No and you're done, Debian / Ubuntu should stop installing automatic updates.

If you want to go this route, remove unattended-upgrades using:

Installing node-rdkafka on M1 for use with SASL

logix2
How To Get Dark GNOME Shell Menus And Dialogs On Ubuntu 20.04 Focal Fossa With Yaru Theme
#ubuntu
Another Gksu Alternative For Ubuntu (Xorg)
#ubuntu

Once suspended, logix2 will not be able to comment or publish posts until their suspension is removed.

Once unsuspended, logix2 will be able to comment and publish posts again.

Once unpublished, all posts by logix2 will become hidden and only accessible to themselves.

If logix2 is not suspended, they can still re-publish their posts from their dashboard.

Once unpublished, this post will become invisible to the public and only accessible to logix2.

Thanks for keeping DEV Community 👩‍💻👨‍💻 safe. Here is what you can do to flag logix2:

Unflagging logix2 will restore default visibility to their posts.