Picture this: You’re building an app that uses global configuration values (public and private keys, environment execution configurations, database credentials, domain names, and URLs), and you need to update them frequently. The first solution you’ll come up with is to manage your global values using ENV files. Still, soon enough, you’ll realize that this approach can be a burden and is unscalable, especially in a distributed architectural system.

Suppose you found a solution that serves as a universal secrets manager and allows you to synchronize environment variables at scale efficiently. Would this help you solve your problem better than ENV files? The answer is YES, and the best solution for your issue is Doppler.

This tutorial will teach you how to integrate Doppler into your apps and store your secrets with it. In this article, you will build and deploy a demo app with Python (Flask) and Heroku, then manage its secrets and environment variables using Doppler.

Doppler is a universal secrets manager that allows you to efficiently synchronize environment variables across devices, environments, and team members. It will enable you to store, share, and access secrets from a centralized source with support for collaboration, access controls, versioning, secrets documentation, and many more.

Doppler provides many unique features and functionalities that make it more than just a storage for secrets. Here are some of them:

Getting started with Doppler

To continue with this tutorial, you need an account with Doppler. Create one on the Doppler website using your email address, Google account, or Secure SSO if you don't have one.

Projects are used in Doppler to universally organize and manage your secrets from local development to production.

Click on the Create Project button in the Doppler dashboard, as shown in the image below: 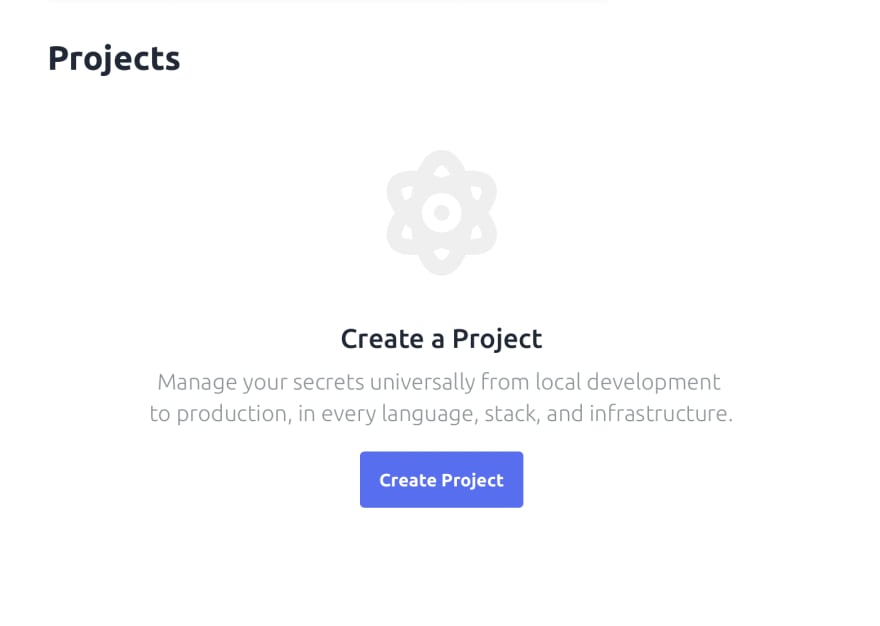 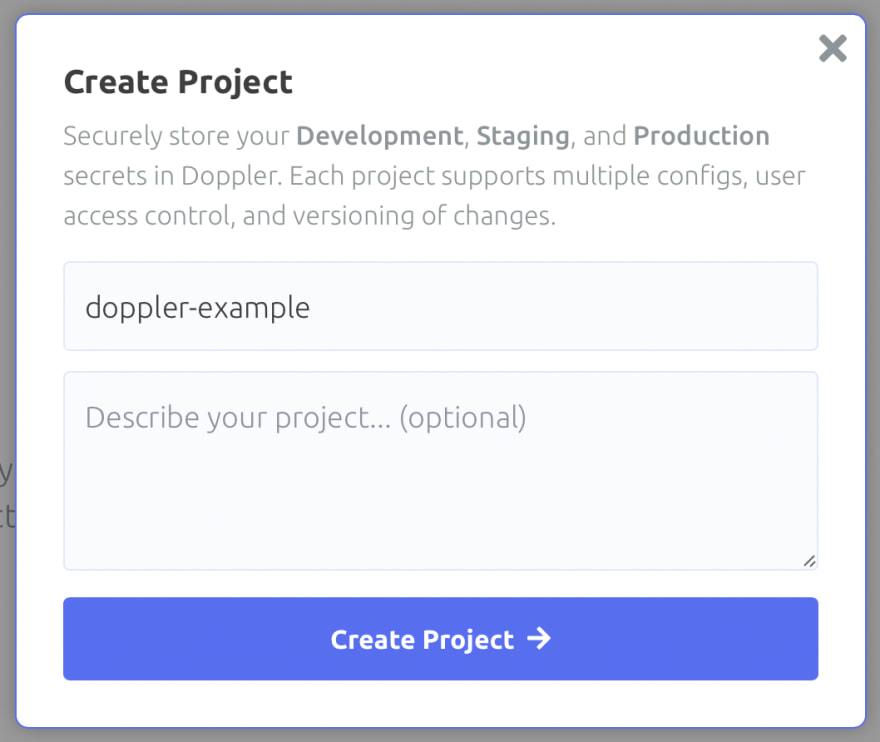 Step 2: Store your secrets in Doppler 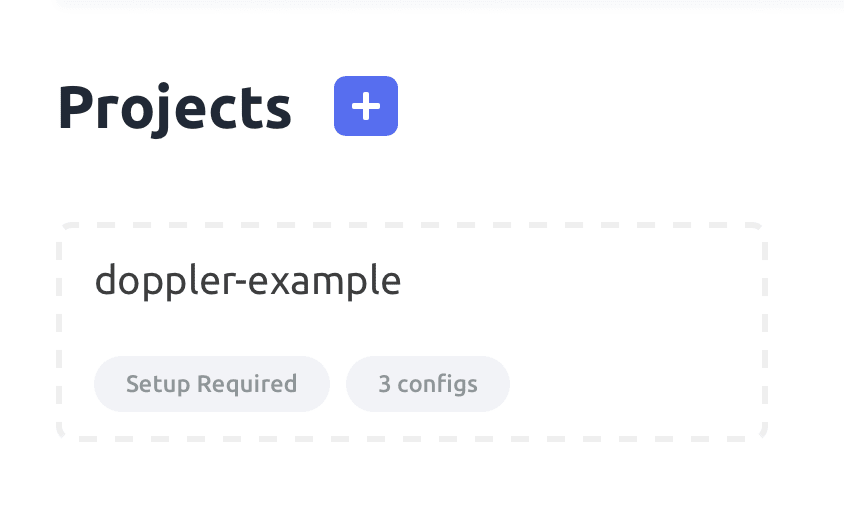 Next, configure the Project config and store secrets in it. Click on the Add First Secret button to add secrets manually or the Import Secrets button to fetch them from an ENV, JSON or YAML file. 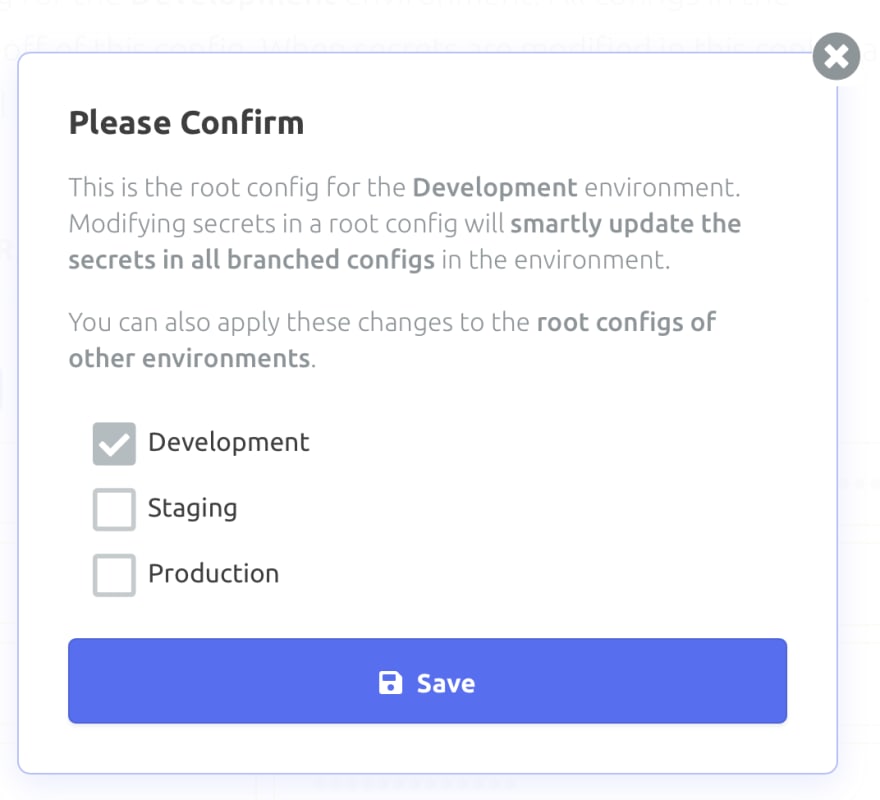 Don't forget to press the Save button after adding/updating your secrets in Doppler.

The Doppler CLI is a lightweight binary that allows you to access your secrets in any environment (local, development, CI/CD, staging, production). Follow this guide to install it on your machine.

To connect the Doppler CLI to your account and access the secrets of your Projects, you need to be authenticated on it using an access token. Doppler CLI provides a doppler login command to authenticate yourself via your browser (for local development).

In the terminal, type the following:

You only need to do this once per workplace. If you have multiple workplaces, you can scope each login to a separate directory.

Step 5: Set up a Doppler Project

Change the current directory to your app directory, then type the following in the terminal:

Now, select the Project and config you want to configure your app to use:

You can also use a doppler.yaml file to pre-configure the Doppler Project and config for your app. Follow this guide to learn how.

Doppler allows you to set up secrets for multiple projects on a single machine simultaneously by scoping them to specific directories.

After setting up the Project and config of your secrets for your app, you can inject your secrets as environment variables into running processes using doppler run. Let’s see an example where we access our secrets from the Python shell.

In your terminal, type the following:

Here, you launched a process (python3) and injected your secrets (that we created earlier) into it using doppler run. Then, you fetched the secrets from environment variables using os.getenv().

You can learn more ways to inject Doppler into running processes from this guide.

Setting up the Python app

Now that you have successfully injected your secrets into a running process using Doppler, let's start building a Python (Flask) web app that uses the secrets you stored in Doppler.

You need to install Flask on your machine. In the terminal, type the following:

Create a file named app.py in the same directory you set up Doppler and save the following code in it:

Step 3: Start the app with Doppler

Start the app using doppler run to inject the secrets into the Flask server. In the terminal, type the following: 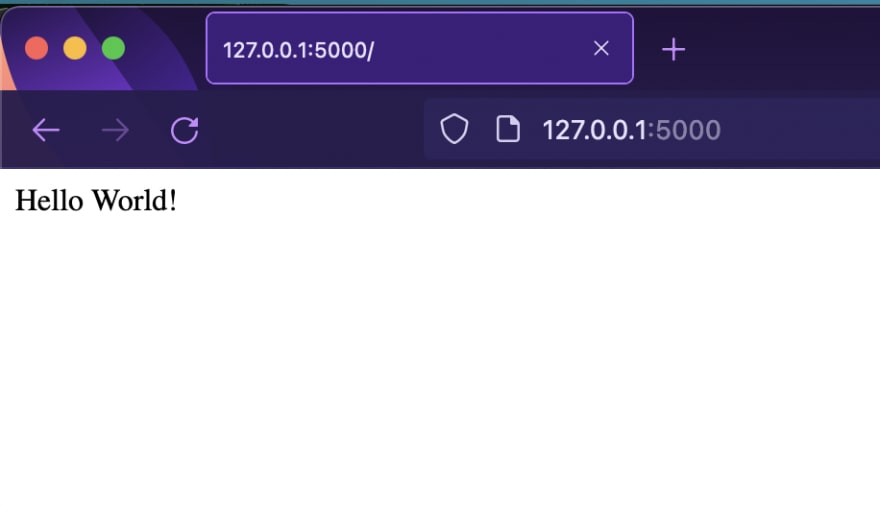 Integrating Doppler with Python and Flask

Let's fetch the secrets from Doppler and use them in the Python (Flask) web app. Since Doppler injects secrets as environment variables, you can easily retrieve them using the built-in os.getenv() function provided by Python like you would when using ENV files.

Update the app.py you created earlier with the code below:

Step 2: Start the app with Doppler

Start the app using doppler run and open the http://127.0.0.1:5000 URL in your browser to confirm Doppler injected your secrets correctly. 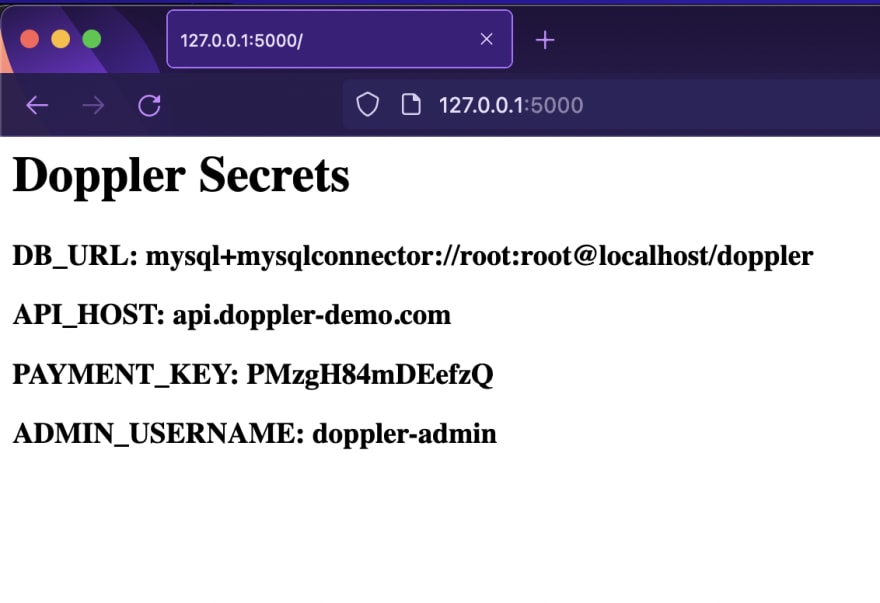 Step 3: Update the secrets in Doppler

Change the secrets from your Doppler dashboard to see how easy, efficient, and scalable the synchronization of your environment variables has become. 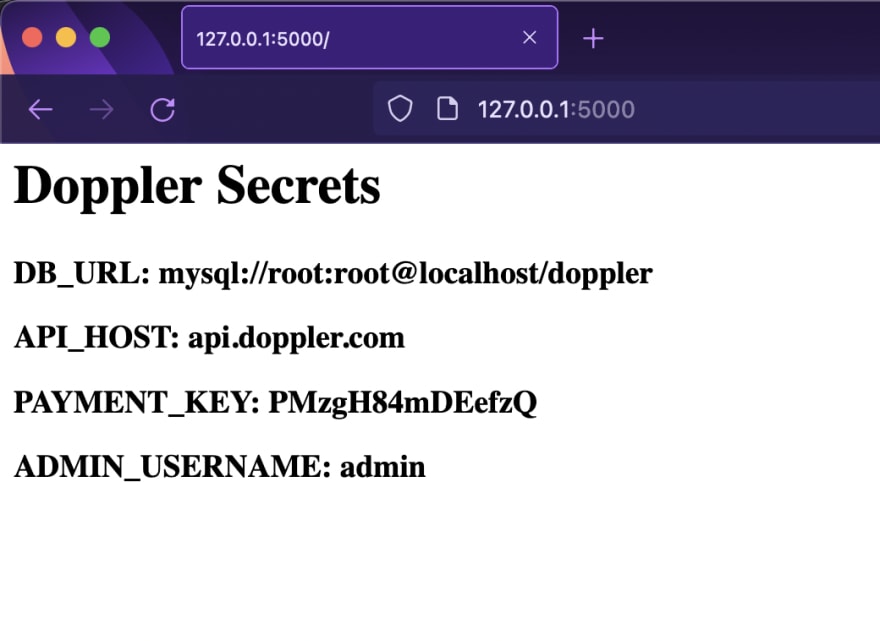 Doppler provides integrations for many cloud providers, including Heroku, AWS, Digital Ocean, Azure, Docker, GCP, and many more to keep your secrets synchronized wherever you develop and deploy.

Doppler also simplifies the whole cloud provider integration process, only requiring you to set things up with a couple of clicks. Let's see how to integrate Doppler with Heroku.

Step 1: Create an app in Heroku

Login to your Heroku dashboard and create a new app to deploy your Python (Flask) app. 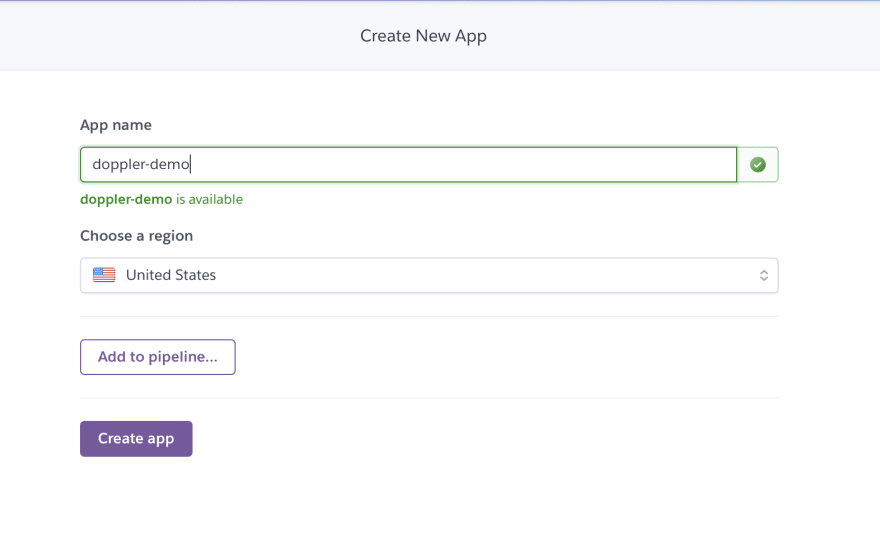 Head over to the INTEGRATIONS tab in the stg (staging) config setup of your Doppler Project.

Don't forget to configure your secrets in the stg config of your Project. 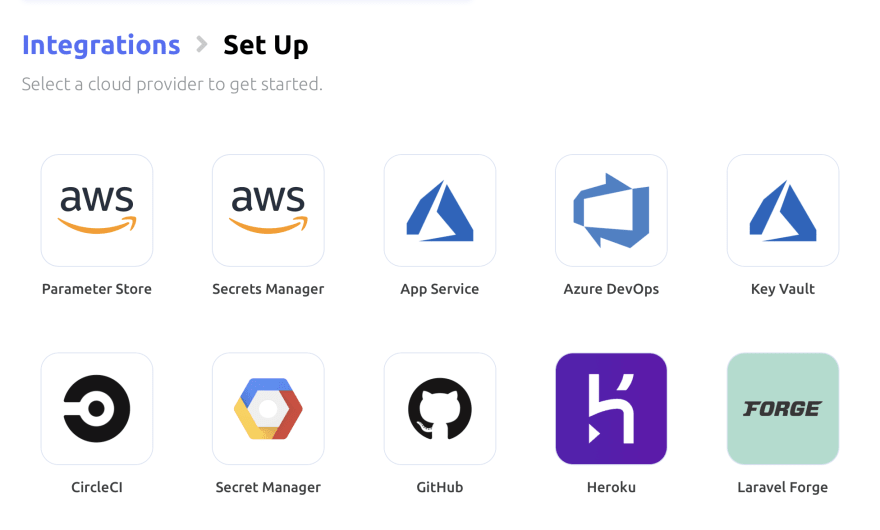 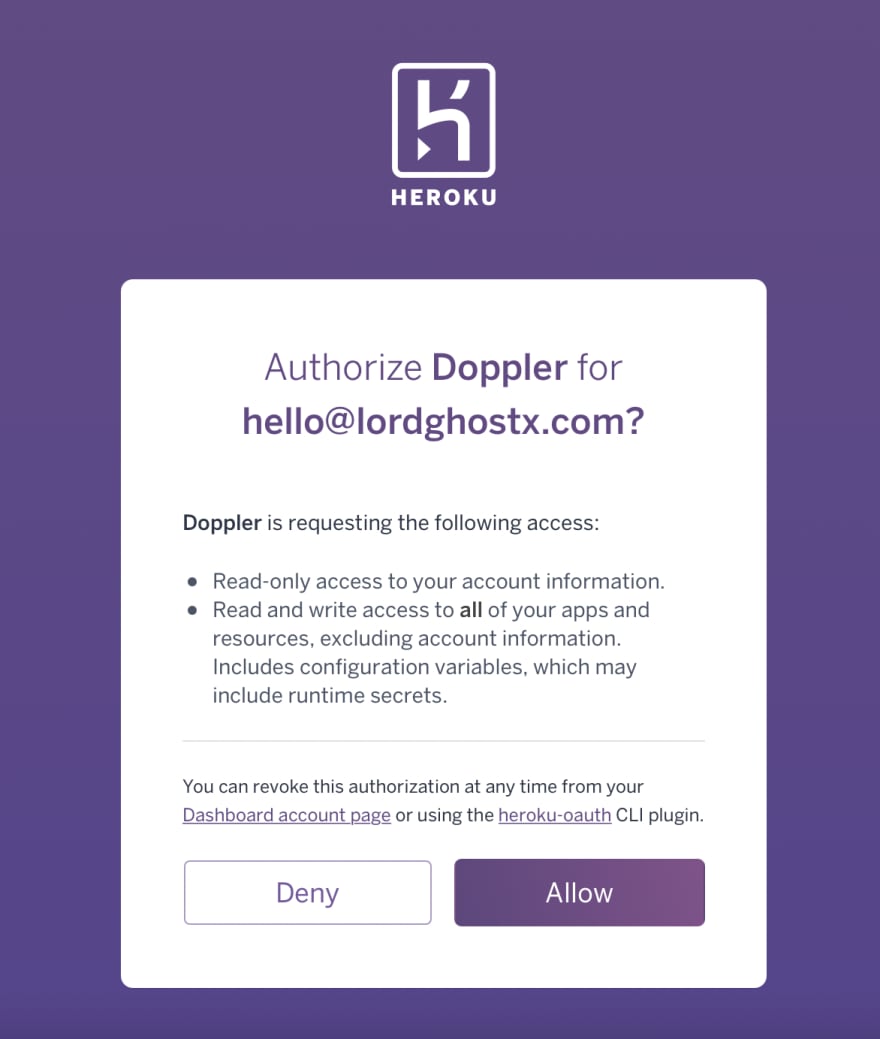 Finally, complete the integration process by setting the following:

Click on the Set Up Integration button after providing all the necessary information. 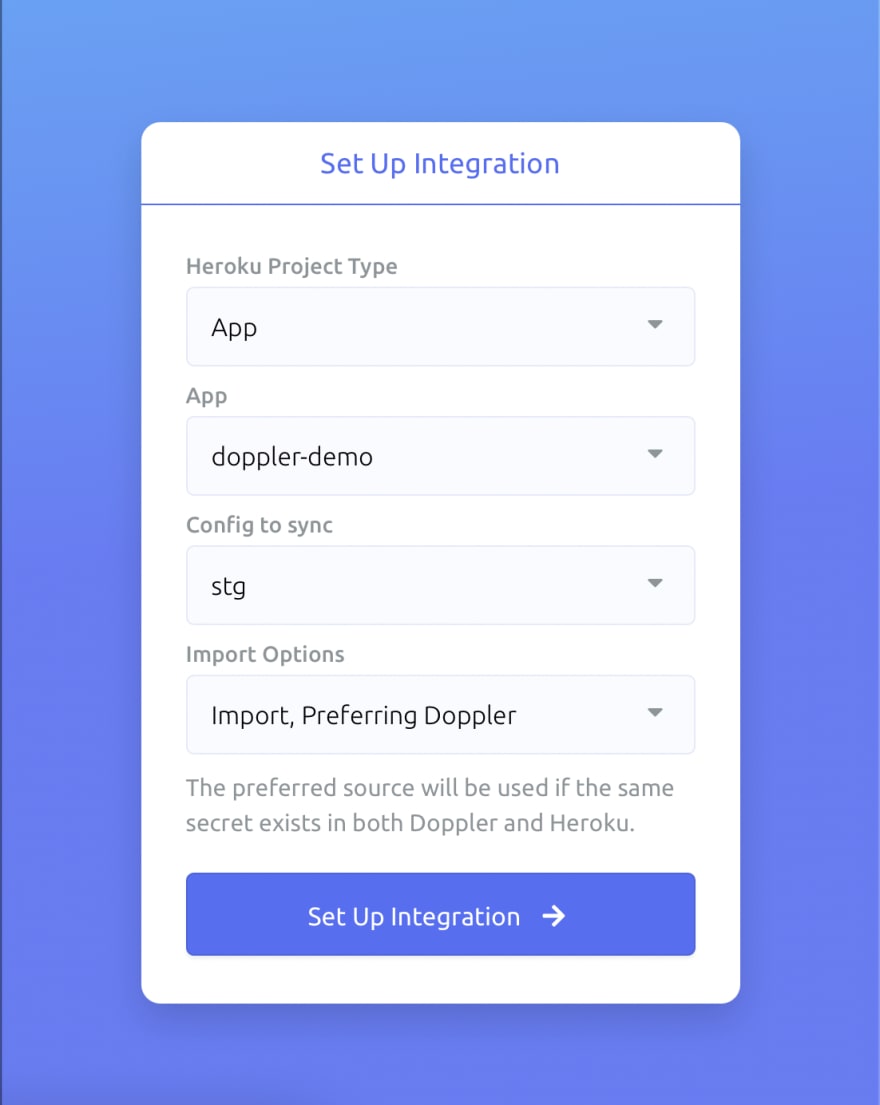 You have successfully integrated Doppler with Heroku. Whenever you make changes (adding/updating) to your Project secrets, Doppler will automatically synchronize them with your Heroku app's Config Vars.

Step 3: Deploy your app to Heroku

Deploy your app to Heroku as you would typically do. 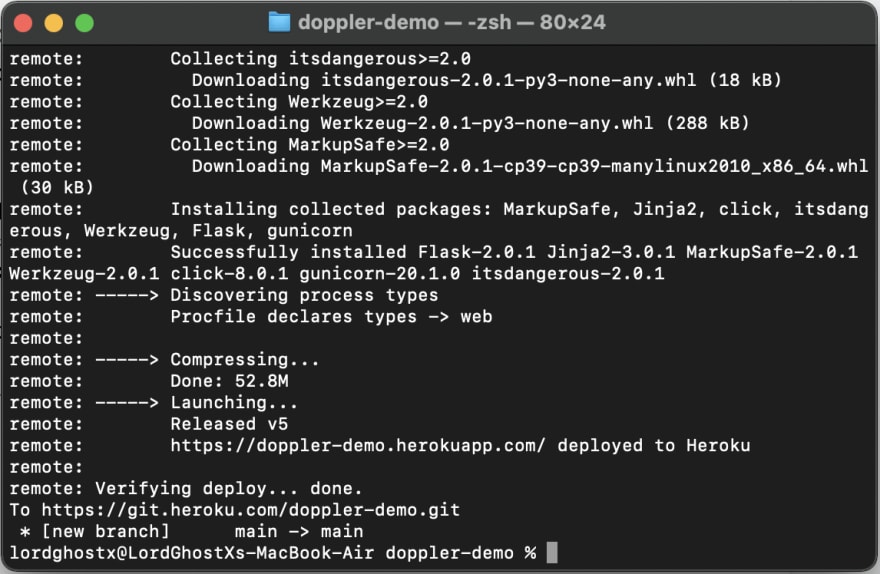 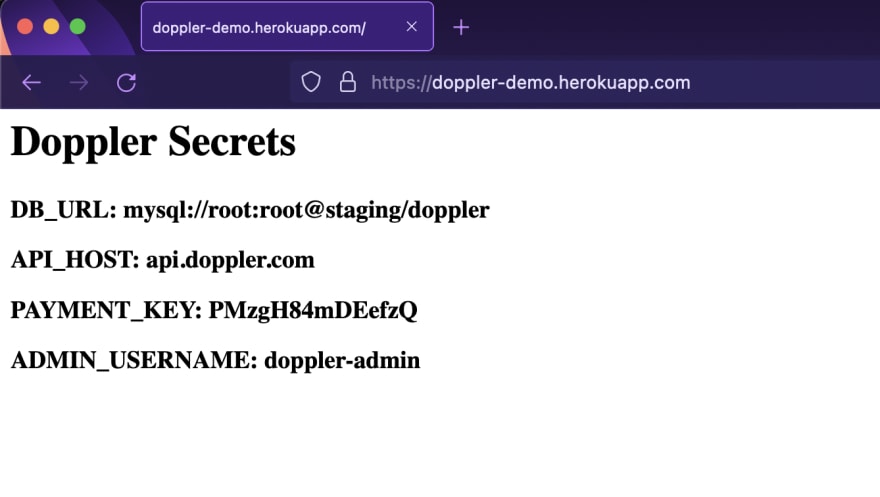 By integrating Doppler with Python (Flask) and Heroku, you built and deployed a web app with efficient and scalable secrets management using minimal effort. You saw how to store, share, and access secrets using Doppler and integrate your Project with a cloud provider.

You can also learn more about Doppler from the official documentation. If you have any questions, contact me on Twitter: @LordGhostX

15 tools and resources every developer should know about in 2022

Once unpublished, this post will become invisible to the public and only accessible to LordGhostX.

Thanks for keeping DEV Community 👩‍💻👨‍💻 safe. Here is what you can do to flag lordghostx:

Unflagging lordghostx will restore default visibility to their posts.