In the previous article, we spoke about grammar and what we need to complete this project.

It’s now time to finally dig into the coding part.

Set Up The Environment

To set up the environment we first need to create a folder for the project and the virtualenv we’ll use for it.

For this project, we will use a couple of python libraries:

Autopep8 isn’t needed for the project itself, but I use it to help me with keeping formatting uniform throughout the codebase.

On the other hand, we’ll use NumPy to build the AST.

Inside pyregex, we create an src folder where we will place all our code.

The __init__.py files you see are empty files needed by python to navigate through the project.

What Is a Lexer

A Lexer (or Scanner) is a component that takes a string as input and outputs a list (array, or whatever) of tokens, i.e. “category of words, logical tokens, of a grammar”. 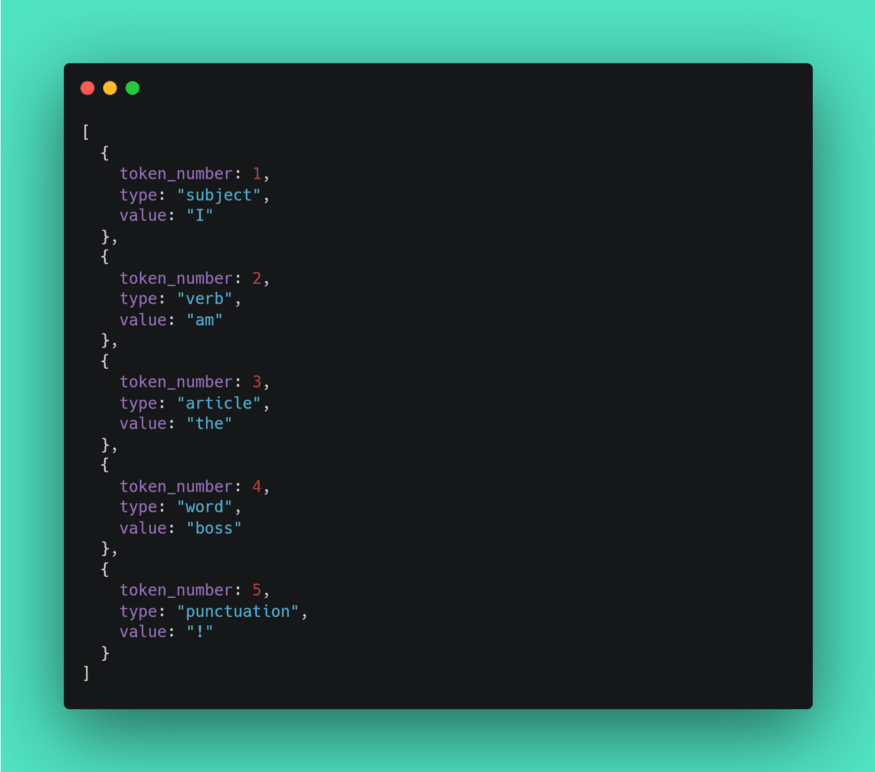 Our lexer will have to recognize different types of tokens (character, parenthesis, brackets, escape, …).

To do so we first need to define a hierarchy of tokens types.

In the list above you can see the hierarchy of tokens we’re going to create and a few implemented token classes. (Remember that the complete code is available here).

For many of the tokens, I created first a base class to represent the type and then more specialized ones for the actual char we choose to be the one representing the type.

This wasn’t strictly necessary, but adds not much work and may help you keep the code coherent and makes it easy to overload token types (maybe one day I will want ‘#’ to be an escape too for some reason).

The lexer itself is a quite simple component.

In a file named lexer.py, we create the class Lexer which will implement the scan method that will take a string as input and outputs a NumPy array of the tokens recognized.

To recognize the tokens the Lexer iterate through each character of the input string and assigns it the corresponding token.

As you can see it is pretty straightforward. The only two tricky points are the handling of the escape, ‘^’ and curly brace.

The escape
To handle the escape I created a support variable escape_found which is set to false at the end of each while loop.

When an escape it’s actually found, the variable is set to true and the continue clause immediately after restarting the loop without setting it to false again. Thanks to this, in the next iteration, the variable value would be true, thus triggering the specific condition (if escape_found).

The code specific to the condition is then executed and, since there is no continuity, the end of the loop code is reached and escape_found is set again to false.

The ‘^’
This is by far the most interesting in my opinion because the reality is that, unless you find it as the first character, you can’t be sure if what you found is a negation, like in [^abc] (i.e. match a char that is anything but a, b, or a match start token in a subsequent regex, like in ^abc$|^012$ .

Since this is impossible to tell, in our implementation each ‘^’ after index 0 is recognized by the lexer as a Circumflex (NotToken), and then it will be the parser to have the final word on the question.

The Left curly brace
When a left curly brace ‘{‘ is met, we enter to a kind of “sub-grammar” that recognizes the quantifier {min, max} (with min or max eventually omitted).

Thus, the number of allowed tokens tightens, and it is always good to recognize early badly formatted regexes.

Because, if you can eliminate some grammar errors in the Lexer, which is fairly simple, you won’t have to check for the same error again in the Parser, which is already more complex by itself, reducing (by a tiny bit) the complexity of it.

As you probably noted, the Lexer is a very simple component to design and implement.

Harder times will come as we’ll design and implement the Parser, and even harder with the engine (and the backtracking system above all).

I hope you enjoyed reading this article. For this part I think we did enough, don’t hesitate to ask me questions if something isn’t clear to you, I’ll be glad to answer any questions!

Once suspended, lorenzofelletti will not be able to comment or publish posts until their suspension is removed.

Once unsuspended, lorenzofelletti will be able to comment and publish posts again.

Once unpublished, all posts by lorenzofelletti will become hidden and only accessible to themselves.

If lorenzofelletti is not suspended, they can still re-publish their posts from their dashboard.

Once unpublished, this post will become invisible to the public and only accessible to Lorenzo Felletti.

Thanks for keeping DEV Community safe. Here is what you can do to flag lorenzofelletti:

Unflagging lorenzofelletti will restore default visibility to their posts.