Last week I finally worked on a test runner for Nodjes based on zora.
I had already written an article inspired by some of the zora's properties and I keep finding interesting how such a small project (in code size) can inspire me new subjects of discussion (I still have few in mind). This one will lead us through some fundamental concepts of Nodejs architecture and general computer programming such event loop, concurrency, parallelism, and how they can be related to the performances of a testing software.

It all started when I added pta to the benchmark in the zora's repository. This benchmark tries to compare speed of execution for various testing frameworks. Performance is clearly at the center of the developer's experience and their productivity when it comes to testing software. Some of the popular frameworks have relative complex architectures involving abstractions such child processes to deliver (not only) top level performances. While zora is at the opposite quite simple but performs much faster according to the aforementioned benchmark.

The benchmark consists in running N test files, each having M tests. One test would be the corresponding code with the different test runners syntaxes (if I did not make any mistake):

By changing N, M and WAIT_TIME we can mimic what I consider to be the profile of some typical Nodejs applications.

Each framework runs with its default settings.

As we will see, the results can actually be predictable, at least for some of the test runners.

The Event Loop and Nodejs's architecture

Nodejs' Javascript engine (like many others) is single threaded and is built around an event loop. There are already many resources online to grasp these two concepts (you can for example refer to the official Nodejs documentation) but to make it short it means:

The event system is particularly helpful for asynchronous operations as you do not have to block the main thread waiting for a task to complete. You would rather have to launch the asynchronous task and later, when it is over, the scheduler will be notified to enqueue another task: the execution of the callback.

Historically asynchronous tasks were made exclusively through event listeners called, due to their nature, "call me back" or "callback". In modern Nodejs there are newer built in abstractions you can use such async functions and promises or (async)iterators, (async)generator functions, etc. But in essence, the idea is the same: prevent the main thread from being blocked waiting.

The callbacks will execute after the function fn runs to its completion. The whole program will run in a bit more than 1000ms as the
setTiemout is not blocking: it just schedules on the event loop the execution of the callback function after some elapsed time.

The whole Nodejs architecture is based around these concepts. Let's take the example of a web API.

In a multi threading environment, a request would typically be handled by a thread from its parsing to the sending of the response.
It means once the request has been parsed and the database is processing the query the thread is paused waiting for the database to complete its work, eventually wasting processing resources. Later it is resumed to send the response made of the database result.
It implies you can roughly have as many concurrent requests as threads the server can manage at the same time.

In Nodejs as long as you don't block the event loop the server would be able to handle more requests even within its single thread. It is usually done by using one of the asynchronous patterns to deal with the costly tasks which need access to the disk, the network or any kernel operation. Most of the time, the often called "I/O" operation, is itself delegated to a process which leverage multi threading capabilities like a database server for instance.

Similarly than in our previous example and the setTimeout, the request handler does not have to block the event loop waiting for the database to complete its job, it just needs to pass a callback to execute once the database is done. It means the server can possibly handle a lot of concurrent requests with a single thread, being mostly limited by the database. In a sense, this architecture allows the system to avoid being idle and waste resources.

Concurrency is the ability of a program to start, execute, terminate tasks in an overlapping time. It does not mean the tasks have to run at the same time. It can refer to the ability to interrupt a task and allocate system resources to another task (context switching). Nodejs is a perfect example as you can reach very high concurrency with a single thread.

Now that we are familiar with the callback pattern, let's use async functions and promises instead.

The task function may appear to block the main thread but it is not the case. The await statement allows indeed to suspend its execution for a while but it does not prevent the main thread from running another task.

The last program will run in something close to 1000ms whereas a single task function itself takes 1000ms to run. We were able to execute the two tasks concurrently.

This function takes close to 1s to return its result on my machine. But contrary to the task function, longComputation whose code is all synchronous blocks the main thread and the event loop by monopolising the CPU resources given to the thread. If you run the following program

It will take close to 2s (~1s + ~1s) to complete and the second task won't start before the first one is finished. We were not able to run the two tasks concurrently.

In practice, writing such code is a very bad idea and you would rather delegate this task to another process able to take advantage of parallelism.

Parallelism is the ability to run different tasks literally at the same time. It usually involves running multiple threads with different CPU cores.

Well, actually even with Nodejs you can run multiple threads (or child processes). Let's see an example with the newer Worker Threads API;

and the main program

Great! This has run in roughly 1000ms. It is also interesting how we have shifted back to the paradigm of the previous section with non blocking functions.

Note: attentive readers will have spotted that the longCalculation creates a new thread worker with each invocation. In practice you would rather use a pool of workers.

How is this related to our testing frameworks ?

As mentioned, speed is a must for the developer experience. Being able to run tests concurrently is therefore very important. On the other hand
it enforces you to write independent tests: if you run tests concurrently you do not want them to mess up some shared data. It is often a good practice but sometimes you need to maintain some state between tests and run various tests serially (one starts when the previous is finished). This can make the design of a testing software API quite challenging...

Let's now try to explain the result we had for our "extreme" case:

Let's build a small zora to understand how it works (and achieve a high concurrency) and how it tackles the problems mentioned in the introduction of the previous section.

We can write a testFunction function as so:

and the test harness factory as so

That's it! You have a whole testing library within less than 100 lines of source code which can use whatever assertion library as long as it throws an error (the assert module from Nodejs' core is a good candidate !). 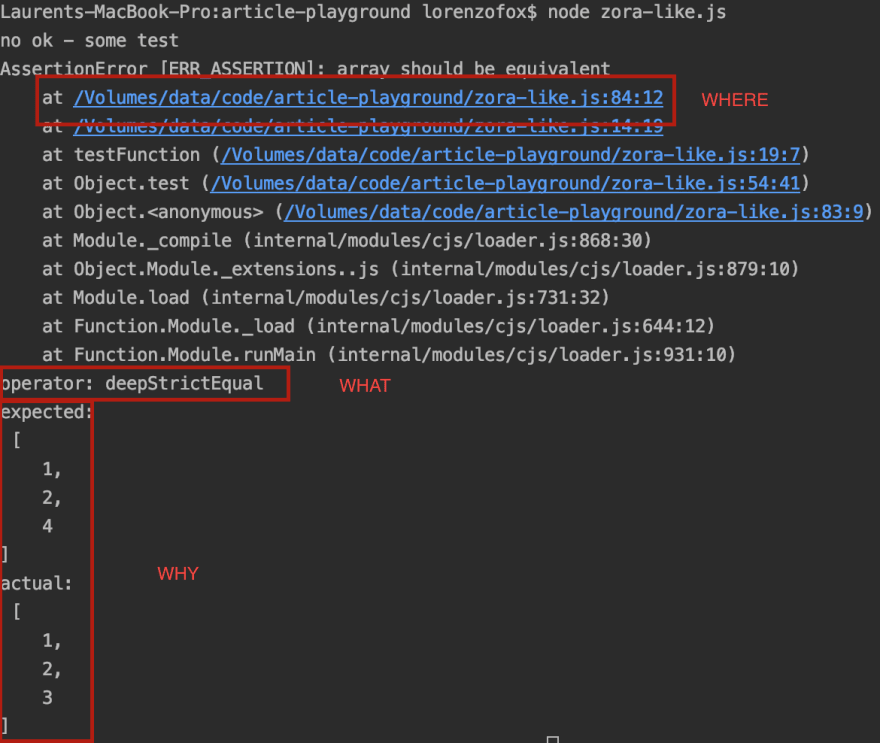 If you wish to play with this basic test runner, you can fork the following gist and run the test program with node: node test_program.js

We have reviewed Nodejs' architecture and saw how it can allow high concurrency without necessarily involving parallelism. We have placed it in the context of a testing software and saw how we could give a high quality user experience to the developer and greatly improve their productivity.

We can also discuss whether parallelism has an added value in the context of Nodejs testing experience. We already saw that it may not be the case regarding the performances. Of course you could find some use cases where parallelism could bring you better performances. Or you could argue the test function in the benchmark is not "blocking enough" to be realistic (you would be right!) but as we said earlier, if you need parallelism in your tests because the code you are testing is slow, you are probably doing it wrong.

In practice I have personally been using zora (or pta) for a wide range of use cases and never had any performance issue:

On the other hand, child processes have other interesting properties from a testing perspective, naming isolation. It allows you to run a given set of tests in an isolated, sand boxed environment.
However, it also leaves you with few new issues to address (stream synchronisation, exit codes, etc) making the code base inevitably grow. I would not say AVA is minimal(14.8mb), neither is Jest(32mb). Of course they offer way more "features" than our few bytes test runner. But are "runs previously failed tests first" or "re-organizes runs based on how long test files take" really required when a whole test suite runs within a pair of second.

The title refers to our ability, as developers, to sometimes over engineer solutions where simplicity is just what we need.

What tools do you use?

Moar Automation in DevRel - Build a Slack bot that notifies you about relevant Dev.to articles