This post was first published on CoderHood as Famous Quotes, and Other Logical Fallacies. CoderHood is a blog dedicated to the human dimension of software engineering. 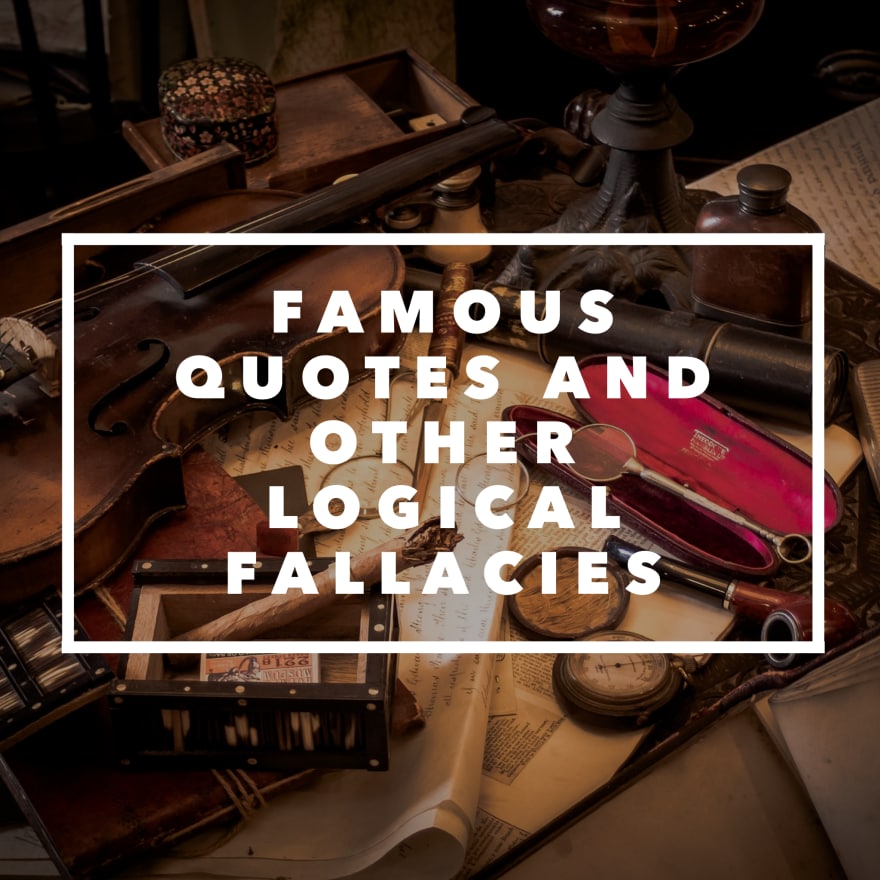 LogicalÂ fallacies and their ugly heads

Logical fallacies will show their ugly head in dialog during your career in tech, and life in general. Do not let that go!Â It will distort reality and introduce contradictions to supposedly logical arguments. People regularly repeat phrases and quotes as unquestionable truths, because some famous person said them in the past. Such phrases sound smart and are attached to famousÂ names that we would not dare to question. People repeat those phrases because we are used to them, and weÂ assumeÂ them to be true.

An articleÂ I recently read reminded of a quote by Sir Arthur Conan Doyle, which has a logical fallacy:

"Once you eliminate the impossible, whatever remains, no matter how improbable, must be the truth."

When you hear someone quote this monstrosity, don't let it go! It is a logical fallacy, and it is simply wrong. Just because Arthur Conan Doyle was a "Sir" and wrote books about a smart detective, it does not mean he was right all the time.

"Once you eliminate all disgusting foods, whatever remains must be delicious."

Clearly, that is not the case! If you had 10 foods in front of you, and you eliminate the onesÂ that you consider "disgusting", some remaining foods wouldÂ be good, some just edible, and some delicious.

Additionally, similarly to "truth" and "impossible," what is "disgusting," "just edible," "good," and "delicious" are also subject to interpretation, muddying the matter even more.

Once you eliminate the impossible, what remains is "not impossible," which simply means "possible." If something is possible it does not mean that it is true, nor likely. It simply means that there is a non-zero chance of it being true, not a certainty.

Sir Arthur Conan Doyle should have stated the principle as follows:

"Once you eliminate everything that is not the truth, whatever remains, no matter how improbable, must be the truth."

See the difference? Let's brush aside --- for a moment --- the fact that "truth" is often subjective and thus subject to interpretation, and let's say that we have an unquestionable or at least self-consistent concept of truth. "Not the truth" and "truth" are logical opposites, so the quote starts making more logical sense. Written this way, however, it doesn't have the same punch and frankly seems obvious.

Question everything, even if you heard it before, some famous person said it, and "sounds" smart.

Will Low-Code steal your job?