Understanding Knowledge, setting up the road and evaluating it while following it.

I’m kind of a Senior Software Developer, I’m 24 years old and I’ve been coding since my fourteens. But I had Up and Lows during all this time, especially on the “learning” path.

I have a strong Bipolarity disorder and, while on some side of it, my TDAH shows up really hard.

By that, for this year, I got myself into trying to fix the inconstant learning curve that I had and how to figure out a way to get myself following it along the whole year, by now, there’s no proof that this work, actually, by 2022’s I’ll be testing this on myself.

As the world changes, we should change to follow along.

Thats why I’m proposing this, because we need to keep up, as professionals (no matters about if you’re or not a developer like myself, I think this could work for you too)

Imagine that all your knowledge stands in some of pyramid shape. Like this: 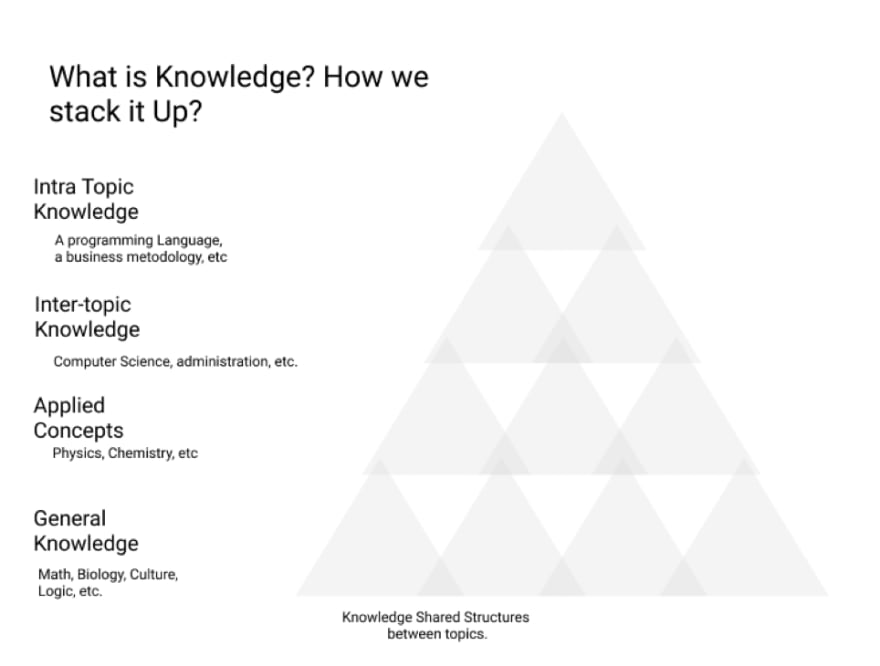 Take a good look on the concept, you will able to understand it.   There is “fundamentals”, by that I mean: “They gonna be the base” for the next role and so goes on.

After sometime, you’ll get'em exercised so much that you won't be in the need to really keep overlooking at them.

After that, we get the applied concepts. And those gonna be built already over other fundamentals, like the sharing of the culture with Math (Logic) by the language.

Inter Topic Knowledge is like what you’ll learn at some undergraduate process (or not, u can be a self-taught as I am.)

Intra Topic stands for things like: some kind of extremely applied concept, for sure, they can be also more, like a programming framework, a way to tests things, and so goes on…

But let me make sure you understand the idea of this:

You will not be able to grow further knowledge if the bases aren’t solid.

You have the need to sometimes come back and check that you’re really know that, because if you don’t, everything could fall together, giving yourself a really strong and bad breakdown.

Whats the meaning of the triangle? Or how to apply a new one?

The triangle gonna provide you some kind of good goal reached understandings, measurements and concept to follow along while learning. Something like this: 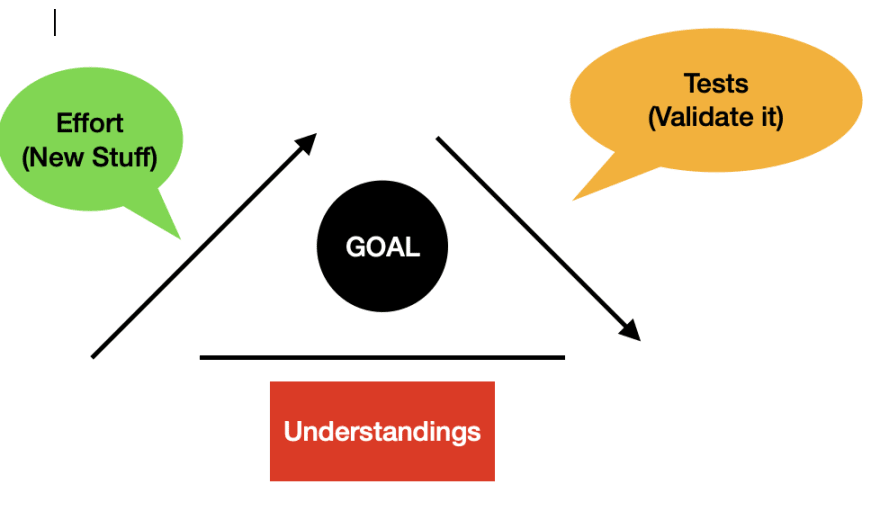 This explains a lot by itself, but let me help:

But, energy is what is our fuel (glucose). After sometime you will get used to it after the sureness of your Goal, and it will stack up as well like the others later on (like logic and language).

"Do I already have enough bases for my next learning triangle goal? If so, what I want to learn? And How I can make sure that My effort can be measured and understood by my own".

Once suspended, luisvonmuller will not be able to comment or publish posts until their suspension is removed.

Once unsuspended, luisvonmuller will be able to comment and publish posts again.

Once unpublished, all posts by luisvonmuller will become hidden and only accessible to themselves.

If luisvonmuller is not suspended, they can still re-publish their posts from their dashboard.

Once unpublished, this post will become invisible to the public and only accessible to Luís Von Muller.

Thanks for keeping DEV Community 👩‍💻👨‍💻 safe. Here is what you can do to flag luisvonmuller:

Unflagging luisvonmuller will restore default visibility to their posts.