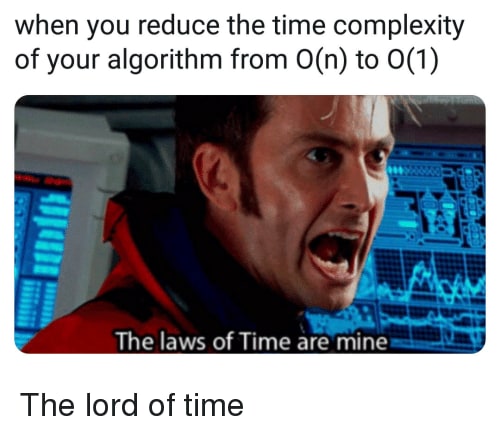 What is Time Complexity?

Company (B) does the same thing, but they can get you a house in 5 hours. Each customer they get in a day increases the wait time by 5 hours; 10 customers are 50 hours; 50 customers are 250 hours.

What is Space Complexity?

Jeff and Bob are both given the task of sorting a box of coloured cubes. Each box has 2 different coloured cubes mixed up, and their task is to sort them so the cubes are layered by colour and not mixed up.

Jeff's way of sorting is by grabbing another new box and putting all cubes of one colour in that box first before inserting the other coloured cubes on top.

Bob's way of sorting is by taking out all the cubes in the box and rearranging and returning them by colour so they are arranged. Space complexity asks the question, How much memory does an algorithm take when doing its task? In the early days of computer programming, memory was very limited in availability, so programmers had to write code that was as efficient as possible with the available memory.

If we look at Jeff and Bob's approach to sorting as algorithms, if Jeff is given 20 boxes to sort, he's going to need 20 new boxes, 100 boxes will require 100 new boxes; that's a lot of boxes. Bob, on the other hand, doesn't need any new boxes in order to sort his boxes. In a situation where memory is limited, algo-Bob will be more efficient. Space complexity has to do with understanding the memory requirements and efficiency of algorithms.

“Big O notation is a mathematical notation that describes the limiting behaviour of a function when the argument tends towards a particular value or infinity. It is a member of a family of notations invented by Paul Bachmann, Edmund Landau, and others collectively called Bachmann–Landau notation or asymptotic notation.” wikipedia

Big O-Notation is a way of expressing how the time and space efficiency of an algorithm changes with the size of its input. There are a lot of different Big O notations that convey the time and space complexity of algorithms, but in this article, we are going to focus on the 6 most common notations and what they mean. 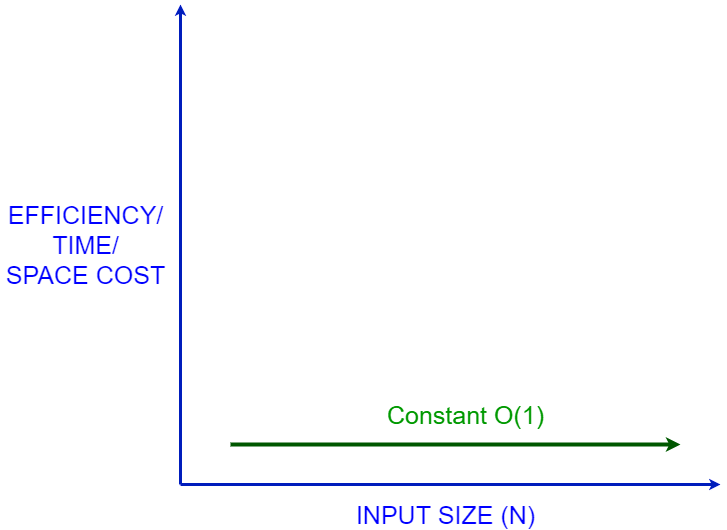 Big O of 1, also known as constant complexity, is used to denote algorithms that are not affected by increases in the input size. An example of this is company (A) which gets its customers a house in 24 hours regardless of how many customers it gets in a day. Algorithms with a time or space complexity of O(1) are considered the best and most efficient.

The above code is an algorithm with a time complexity of O(1), no new arrays are created and the size of the array does not matter when we only return the first index of the array. 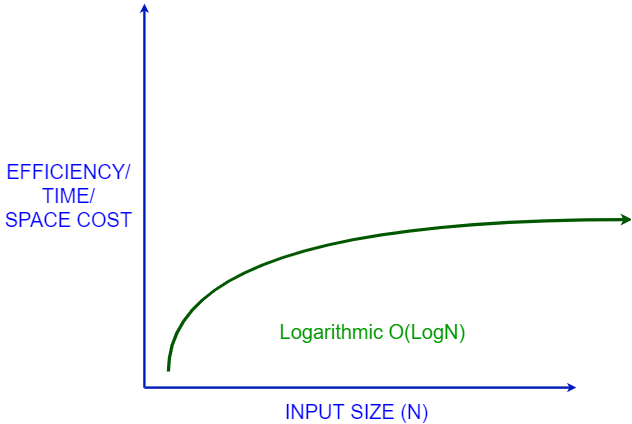 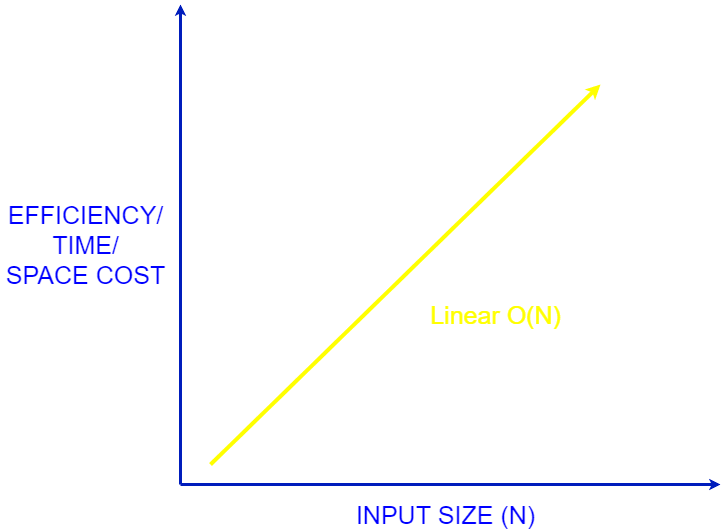 Big O of N, also known as linear complexity, is the next acceptable complexity after logarithmic. Algorithms with a linear complexity increase in the cost of time or space as the size of the input increases, housing Company B is a good example of linear time complexity as the wait time increases with the number of customers.

The above code is an example of an algorithm with linear time complexity. 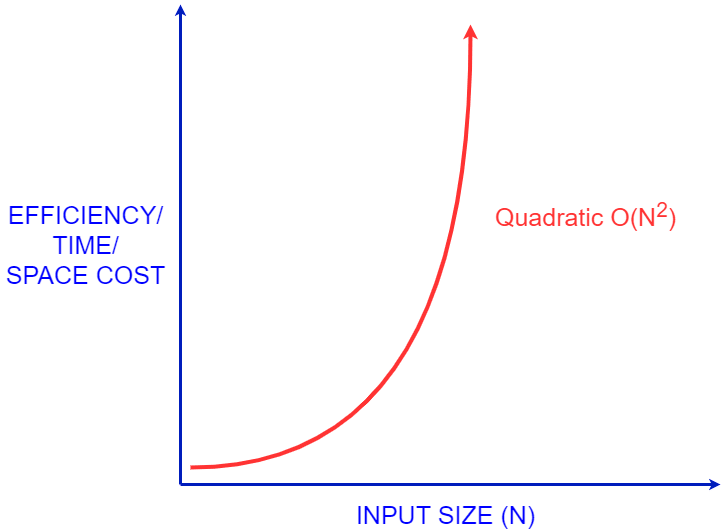 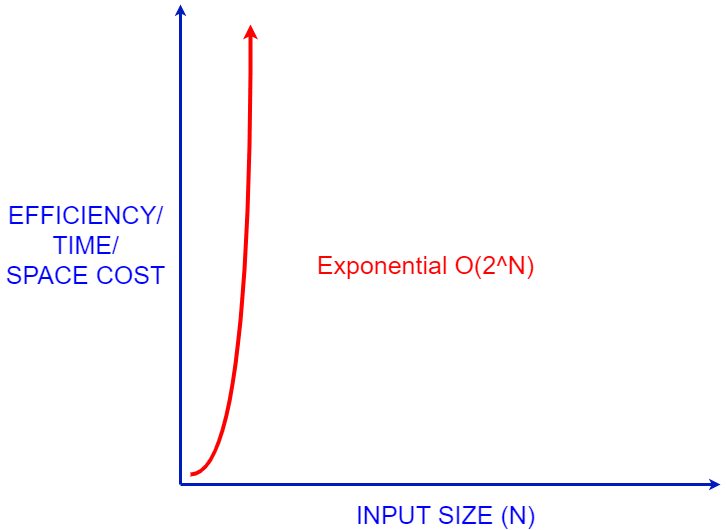 Big O of 2 to the power of N, also known as exponential complexity. In an algorithm with exponential time complexity, for every additional increase in the input size, the cost in time grows exponentially.

A pizza restaurant has several toppings to choose from pepperoni, chilli peppers, and pineapple. Customers may choose any combination of toppings or none at all for their pizza. Now consider an algorithm that finds every possible unique combination of toppings. This is an exponential algorithm with time complexity O(2^n). Look how the possible combinations grow (exponentially) when you add a new topping to the menu:

So with just 20 types of toppings, there are over 1 million possible combinations! stack-overflow 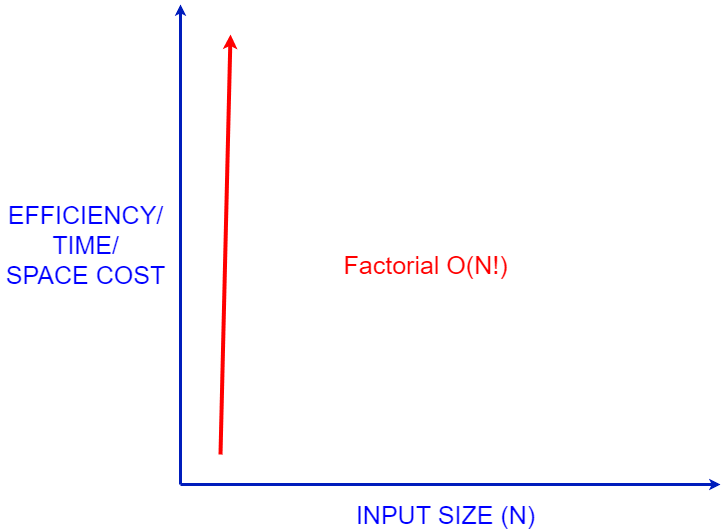 Big O of N factorial, also known as factorial complexity, is the worst efficiency an algorithm can have; algorithms with factorial time complexity should be avoided if possible. Say we have an algorithm that takes a string and creates as many different strings as possible from the characters of the original string, if we have a string with 2 characters "ab" we can make 2 different strings "ab" and "ba"; watch how the number of possible strings grows as we add a new character to the original string.

Let's look at a couple of algorithms to understand what this means.

In the above function, the overall efficiency of the algorithm is impacted by the loop, we could technically say that the Big O notation for the whole function is O(n + 1) which would be correct but is not necessary because as the size of n approaches infinity that additional 1 is negligible so it's better to evaluate the time complexity of the function as O(n).

The above function has 2 loops and a nested loop, is we follow the second rule that would mean the function will have a time complexity of O(n2) because the nested loop has the highest cost in efficiency and as the value of the array increase the additional cost of the other loops will become negligible.

Time and Space complexity is something all developers should have an understanding of because it teaches us to write code that is not just effective but also efficient. if like to learn about the time and space complexity of different algorithms, check out Big O cheat-sheet. If you would like to learn more about Big O notation, check out this awesome, easy-to-understand video. Thanks for reading and a wonderful day ❤️👋.

Once suspended, m13ha will not be able to comment or publish posts until their suspension is removed.

Once unsuspended, m13ha will be able to comment and publish posts again.

Once unpublished, all posts by m13ha will become hidden and only accessible to themselves.

If m13ha is not suspended, they can still re-publish their posts from their dashboard.

Once unpublished, this post will become invisible to the public and only accessible to Michael N..

Thanks for keeping DEV Community 👩‍💻👨‍💻 safe. Here is what you can do to flag m13ha:

Unflagging m13ha will restore default visibility to their posts.